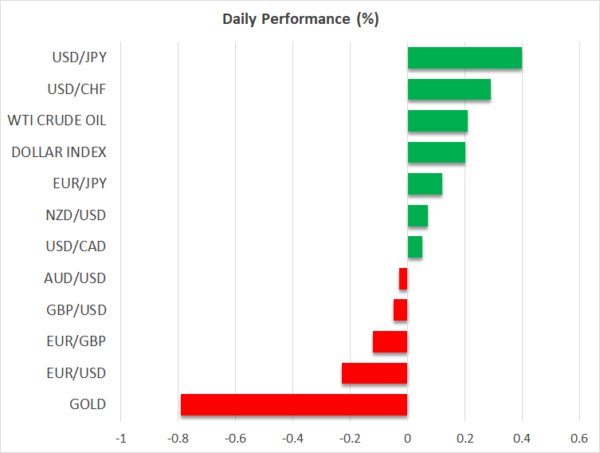 The currency market continues to dance to the beat of rising long-term interest rates. The dollar is marching higher on Tuesday, with dollar/yen overcoming the psychological 110.0 region, mirroring a similar spike in US Treasury yields.

The yen usually suffers when foreign yields edge higher, thanks to the Bank of Japan’s yield curve control strategy that doesn’t allow Japanese yields to rise beyond a specific level. Yield differentials between economies are a critical driver in the FX arena. This interest rate spread essentially acts as a gravitational pull, anchoring a currency pair around it.

The latest moves seem tied to resurgent concerns around inflation. Market-based inflation measures have shot higher as well, perhaps as investors brace for Biden’s multi-trillion infrastructure announcement tomorrow. Coming on top of the latest avalanche of federal spending, such an enormous investment package could turbocharge economic growth and by extension inflationary pressures. 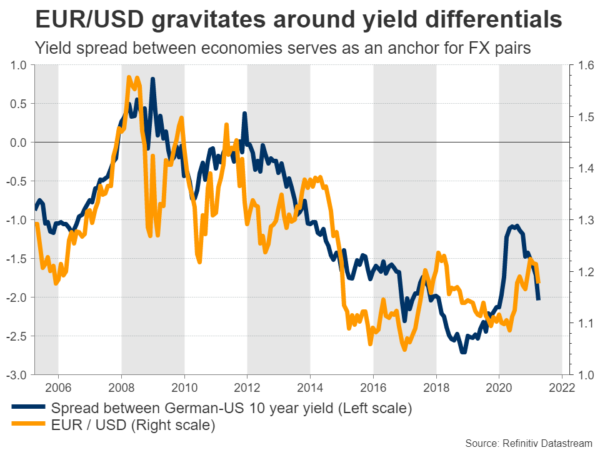 In the big picture, this ‘strong dollar’ narrative is likely to persist as America out-recovers and out-vaccinates Europe and Japan, ultimately leading the Fed to raise interest rates before its counterparts. However, there is a clear risk of a corrective pullback in the near term, should President Biden scare markets with signals for tax increases to pay for his ambitious infrastructure plans tomorrow.

While the spike in yields was enough to propel the dollar higher, it wasn’t enough to sink stock markets. The Dow Jones closed at a new record high on Monday and futures point to a flat open on Wall Street today. The moves highlight the fact that if yields are rising for healthy reasons, reflecting a brighter economic outlook, equities can live with that.

That doesn’t mean stocks will remain calm in the face of higher taxes, though. If recent reports are right that Biden will try to tax capital gains in a progressive manner like regular income and the corporate tax is raised as well, that could spark a decent wave of selling.

While it is not clear whether Biden commands enough support in the Senate to push substantial tax increases through, this is a risk that investors will have to grapple with soon. With stock markets hovering at record highs, this doesn’t seem to be priced in yet.

That said, any retreat is likely to be a mere correction, not a landslide. The taxman may be coming, but those funds will be used to fund productive investments, likely resulting in a net positive economic impact.

Elsewhere, oil prices recovered some early losses to close higher overall yesterday. The unblocking of the Suez Canal initially inflicted some damage on crude as concerns around lasting supply disruptions faded, but investors quickly turned their sights to the prospect of OPEC+ extending its production cuts tomorrow.

The latest reports suggest the cartel is likely to keep its supply reductions in place until June, fearful that global demand is not strong enough yet to absorb any real increase in production.

Staying in the commodity sphere, gold has come back under heavy fire. The combination of a brighter economic picture, a stronger US dollar, and rising yields is a spectacularly toxic cocktail for bullion, which is priced in dollars and pays no interest to hold.

As for today’s events, Germany’s inflation data for March will attract some attention ahead of the Eurozone’s print tomorrow. Meanwhile, the Fed’s Quarles (13:00 GMT), Bostic (16:00 GMT), and Williams (18:00 GMT) will deliver remarks. 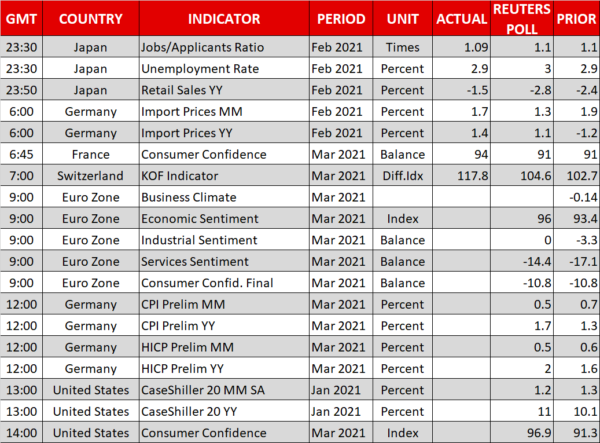