April Flashlight for the FOMC Blackout Period: Rapidly Strengthening Data, but Is It “Substantial”?

The Federal Open Market Committee (FOMC) will hold its next regularly scheduled policy meeting on April 27-28, and we think it is essentially unfathomable that the committee would announce any major policy changes at the conclusion of that meeting. Committee members have made it very clear in their submissions to the “dot plot” (Figure 1) and in public statements that they do not intend to raise their target range for the federal funds rate anytime soon. In addition, we do not believe the FOMC will make any changes to its current pace of asset purchases, in which it buys $80 billion worth of Treasury securities and $40 billion worth of mortgage-backed securities every month. The FOMC has said that it would continue its current rate of asset purchases “until substantial further progress has been made toward the Committee’s maximum employment and price stability goals.” We will discuss the conditions that, in our view, will be needed to bring about an eventual tapering of asset purchases in the next section of this report. In short, however, we believe that the labor market would need to strengthen significantly before the FOMC even starts to publicly contemplate a tapering of asset purchases. 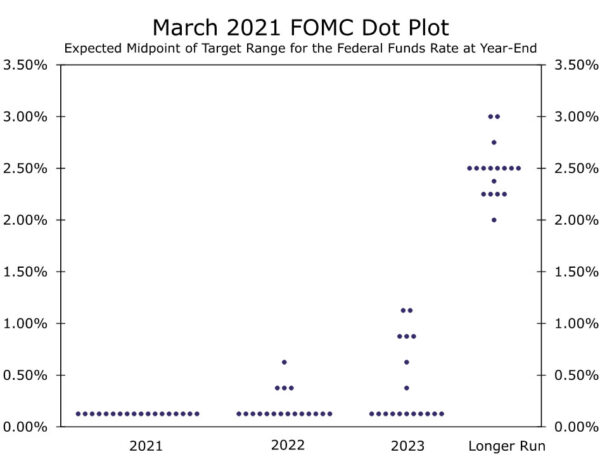 The committee likely will upgrade its assessment of the current state of the economy relative to the statement that was released at the conclusion of the last FOMC meeting on March 17. Incoming data in recent weeks have generally been quite strong. Payrolls jumped by 916K in March, and there were significant upward revisions to both January and February, although the level of payrolls remains 8.4 million workers below its pre-pandemic peak. The ISM manufacturing index shot up to a 37-year high in March, and the ISM services index rose to its highest level on record. Furthermore, the pace of vaccinations has picked up markedly recently. The committee will undoubtedly point to this acceleration in the pace of economic activity in its statement. Still, we do not expect the FOMC to make any indication at this meeting that it intends to begin removing monetary accommodation in the foreseeable future.

The combination of the sharp rise in bank reserves (Figure 2) and the draw down in the balance that the U.S. Treasury Department holds at the Fed means that the banking system is awash in excess liquidity at present, which has put significant downward pressure on short-term interest rates. Indeed, rates on short-dated Treasury bills are essentially sitting at 0.00%. If short-term rates were to slip into negative territory on a sustained basis, then money market funds could begin to experience significant outflows, which could impede the smooth functioning of the overall financial system. 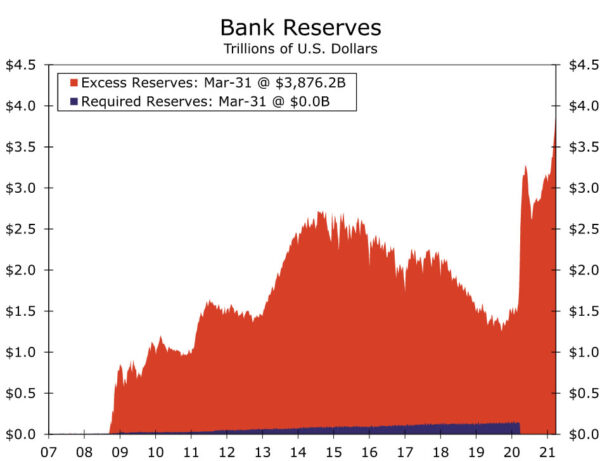 To alleviate this situation, the FOMC could potentially raise the interest rate the Federal Reserve pays commercial banks on the reserves that they hold at the central bank. An increase in this IOER rate, which currently stands at 0.10%, would freeze some of this excess liquidity inside the Federal Reserve, which should offset some downward pressure on short-term rates. If the committee were to raise IOER at this meeting, we think it would do so by five bps. But as we noted in our previous Flashlight Report, any increase in IOER, should one occur, should only be viewed as a technical adjustment that is intended to keep the “plumbing” of the financial system flowing freely. A potential increase in IOER should not be interpreted as a tightening of monetary policy.

When Will the FOMC Signal That “Tapering” Is Approaching?

With the end of the pandemic in sight and economic activity picking up speed, the timing in which the FOMC eventually begins to scale back accommodation is becoming an area of increasing focus. When might the FOMC signal that the process of removing monetary policy accommodation is approaching?

An increase in the fed funds rate remains a ways off. This was evident in the March “dot plot” that showed the majority of the committee expects the fed funds rate to remain unchanged at least through 2023. As included in recent FOMC meeting statements, the committee is waiting to see three things before raising rates: “labor market conditions have reached levels that are consistent with the Committee’s assessments of maximum employment,” inflation has risen to 2%, and “is on track to moderately exceed 2% for some time.”

Less explicit, however, have been the criteria for scaling back the Fed’s asset purchases. Yet, tapering is the next step along the road of policy normalization. The FOMC has stated that it will continue its current pace of asset purchases until “substantial further progress” has been made toward its maximum employment and price stability goals. But what constitutes “substantial” progress? Does the 1.1 million jobs added in March (including revisions) qualify? What about the 2.5% annualized rate of core PCE inflation over the past three months, or long-term inflation expectations at levels not seen since the mid-2010s?

We’ve Done This Once Before: Using 2013 as a Starting Point

While the committee has been purposefully vague to give itself flexibility, we can turn to the previous episode of tapering for some precedent. During Congressional testimony on May 22, 2013, then-Fed Chair Bernanke indicated that the FOMC was contemplating reducing the pace of monthly purchases. Ultimately, the FOMC did not announce scaling back purchases until December of that year, as Bernanke’s comments set off the “taper tantrum,” which caused the yield on the 10-year Treasury security to jump more than 50 bps in the span of a month. The timing of the first hint and formal announcement, however, at least offer reference points as to what may constitute “substantial progress.”

Whether looking at job losses, the state of unemployment or the inclusiveness of progress, the labor market’s recovery still has some ground to make up before it is in a similar position to when Fed policymakers hinted, let alone formally announced, tapering in 2013. Even with the recent jump in employment, payrolls are 5.5% below their pre-COVID peak compared to 1.7% below their 2008 peak when the Federal Reserve began to publicly contemplate scaling back purchases in 2013 (Figure 3). 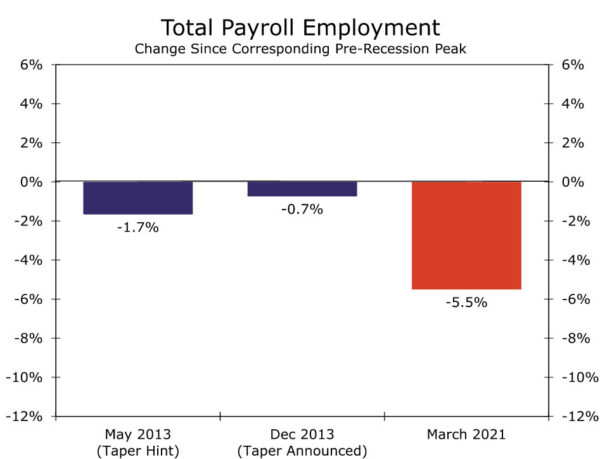 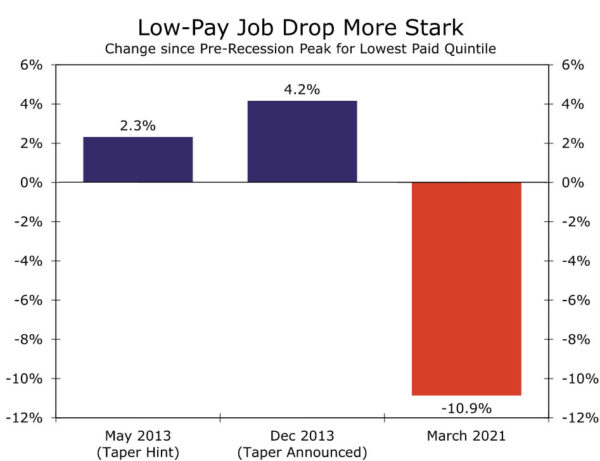 The distribution of labor market weakness also continues to trouble the Fed. Among the lowest-paid 20% of workers, the drop in jobs remains far steeper than for total employment in this cycle and for this group in 2013 (Figure 4). Unemployment is up more at this point of the cycle for workers across racial and ethnic groups, but the increase is particularly pronounced for Hispanic and Asian workers. Meanwhile, the unemployment rate for blacks has risen 1.2 points more than it has for whites since last February (Figure 5). By education, the typical gap between the unemployment rate for workers with only a high school degree and those with a college degree has yet to narrow to the extent it did in 2013 (Figure 6). 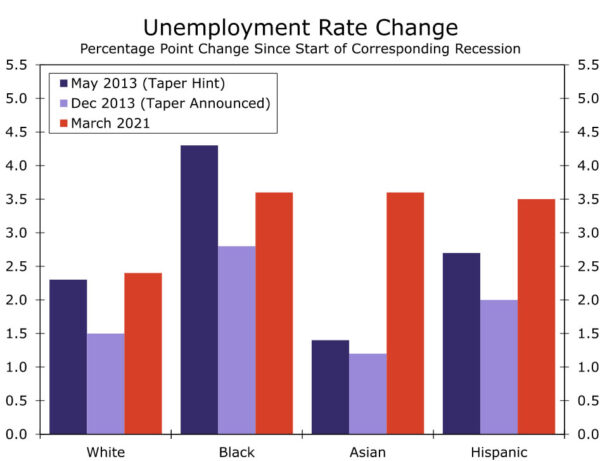 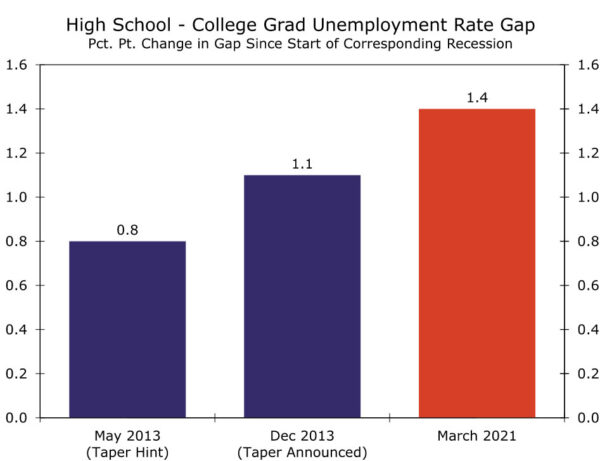 On the inflation front, the Fed remains further from its goal as well, even before factoring in the observation that the goal posts have been moved by the FOMC, which now desires inflation to average 2% over time. When the FOMC announced plans to taper in December 2013, the year-over-year rate of core PCE inflation, which had breached 2.0% earlier in the cycle, had averaged 1.6% during the six years since the beginning of the so-called Great Recession. Fast-forward to today’s recovery. The core rate of PCE inflation has averaged only 1.4% since February 2020.

Notably, we believe the FOMC would need to see at least the same degree of progress as it did it 2013 before it even floats the prospect of tapering. The Federal Reserve has adopted a more outcome-driven approach to policy, where it needs to see rather than merely forecast improvement in the labor market and on its inflation goal. In other words, the current FOMC likely will be slower to remove accommodation for a given economic state than it was during the previous cycle.

With the FOMC now looking for inflation to overshoot its 2% target for some time and with the cumulative progress in the labor market still far from its inclusive goal of maximum employment, we believe it will still be months before the FOMC is ready to broach the topic of tapering. Even under our expectations for a relatively fast recovery in employment this cycle, payrolls do not reach the point at which Bernanke hinted at tapering until December of this year, and do not reach the point at which the Fed actually announced tapering until May 2022 (Figure 7). Meanwhile, we expect it will not be until the fourth quarter of this year before the core PCE deflator convincingly surpasses 2% on a year-over-year basis (Figure 8). Although market participants are eagerly looking for clues on the timing of eventual tapering, we suspect the FOMC will stay mum on the subject at its upcoming meeting. 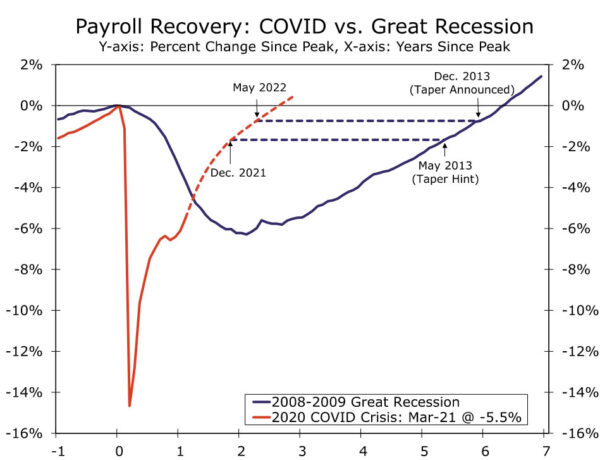 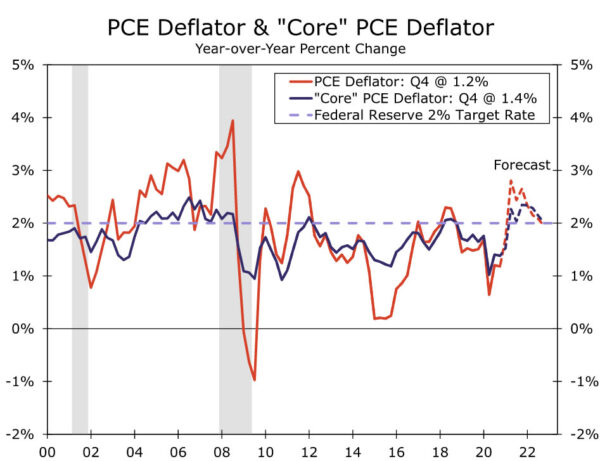