The Loonie tended to rally against the USD yesterday, as despite BoC remaining on hold as expected, the bank decided to adopt a hawkish tilted tone, expressing considerable confidence and tapered its bond purchasing program. On the other hand, the FX market was rather quiet, with the USD retreating somewhat, as US yields tended to remain on the soft side. Gold prices on the other hand benefited from weaker USD, while US stockmarkets were also on the rise as a more risk on approach was present. Oil prices continue to weaken given that US oil inventories were building up, while at the same time the demand outlook seems to be shaky. We may see traders today focusing on the US data, yet we also expect fundamentals to continue to affect USD’s direction. Should the fundamentals allow for a more risk on approach, we may see the USD weakening further and vice versa.
USD/CAD tumbled yesterday, after BoC’s interest rate decision, breaking the 1.2610 (R2) and the 1.2520 (R1) support lines, both now turned to resistance, before stabilising. We tend to maintain a bias for a sideways motion, yet at the same time the RSI indicator below our 4-hour chart is below the reading of 50 implying that the bears may have a slight advantage. Should the bears actually remain in charge of the pair’s direction, we may see USD/CAD aiming if not breaking the 1.2400 (S1) support line which was last tested on the 17th of March and held its ground. Should the buyers gain control with their bid, we may see the pair breaking the 1.2520 (R1) resistance line and aim for the 1.2610 (R2) level which overall tended to confine the pair’s price action to the upside since the 24th of March.

ECB expected to remain on hold

ECB is widely expected to remain on hold (11:45, GMT), keeping the refinancing rate at 0.0% and the deposit rate at -0.50% and EUR OIS imply a probability of 96.7% for such a scenario to materialize, while the release is to be followed by Lagarde’s press conference (12:30,GMT) . Despite Lagarde’s statements that the area is to experience a very fast recovery in the second half of the year, chances are that the economy will reach prepandemic levels in the coming year. It’s characteristic that she compared the Zone’s economy to a patient that is still on two crutches and in need of support for some time. That allows for little optimism in today’s ECB meeting and the tone is expected to be tilted to the dovish side. The event is expected to result in very little changes for the bank’s monetary policy statement. Overall, we see the risks related to the event as tilted to the downside for the common currency at the time.

EUR/USD despite aiming at some point for the 1.1990 (S1) support line, overall remained relatively stable. We maintain a bullish outlook for the pair, as long as it remains above the upward trendline incepted since the 5th of April, yet the trendline could be put to the test should the ECB sound dovish enough. Also note that the RSI indicator below our 4-hour chart is between the readings of 50 and 70 implying that the momentum may still be bullish, currently. Should the bulls continue to dominate the pair’s direction, we may see the pair breaking the 1.2100 (R1) resistance line and aim for the 1.2175 (R2) resistance level. Should a selling interest be displayed by the market, we may see EUR/USD breaking the 1.1990 (S1) support line and aim for the 1.1905 (S2) support level.

Today during the European session, we note the release of France’s Business climate for April and from the UK the CBI trends for orders also for April. In the American session, we get from the US the weekly initial jobless claims figure and the existing home sales growth rate for March, while from the Eurozone we get the preliminary consumer confidence figure for April. During tomorrow’s Asian session, we get Australia’s preliminary manufacturing PMI for April and from Japan the headline and core CPI rates for March as well as the Jibun Bank Manufacturing PMI for April. 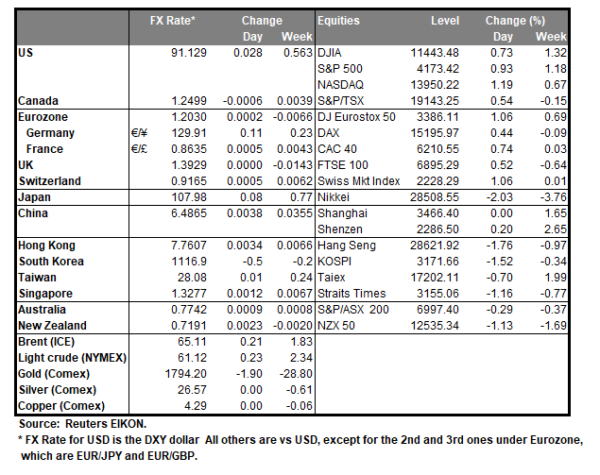 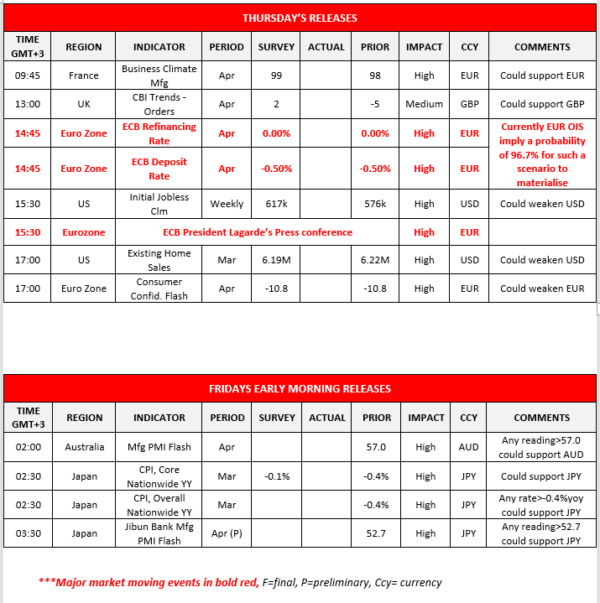