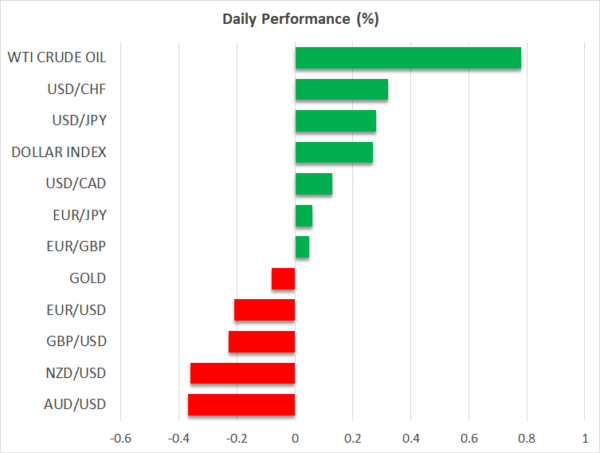 The US dollar was still licking its wounds on Tuesday as it clawed higher in lacklustre trading ahead of the FOMC decision on Wednesday. Although nothing new is anticipated by the Fed tomorrow and Chair Powell will probably maintain his stance that policymakers have no intention of tapering early, investors are anxious to see how long he will be able to underplay inflation concerns even as the US growth outlook continues to brighten up.

In the meantime, many traders appear to be sitting on the sidelines and market momentum has been somewhat subdued so far this week. The Fed could offer some direction but closely watched economic numbers due this week, as well as an auction of seven-year Treasury notes later today could rattle markets.

The last time seven-year notes were auctioned in February, poor demand triggered a wider bond market selloff so a similar episode today could put the Fed in a tricky spot tomorrow. The consumer confidence index expected later in the US session could also push yields higher if it shows a further recovery in sentiment.

Treasury yields have been steadily creeping higher in recent days and may have helped in stabilizing the greenback yesterday when it slipped to near 8-week lows against a basket of currencies. The dollar index was edging higher today, making notable gains against the Japanese yen.

The safe-haven yen was struggling today in a rare negative reaction to bad domestic news. Japan’s biggest economic regions are in a state of emergency amid a fourth wave of the coronavirus sweeping the country. There’s a growing concern that the latest wave will hamper Japan’s economic recovery, putting it behind America and even Europe, having so far managed to steer through the pandemic relatively better than the other big economies.

There was little reaction to the Bank of Japan’s decision to keep monetary policy unchanged.

The aussie and kiwi also fell back quite sharply as the dollar regained some positive footing. But the euro and pound were down only marginally as investors continue to adjust their expectations for Europe, becoming more confident that the UK economy will reopen by the summer as scheduled, with the continent not far behind.

In commodities, copper futures soared to 10-year highs as a miners’ strike in Chile added to supply worries. Oil prices also firmed, with both WTI and Brent crude gaining 1% after OPEC+ left its demand forecasts unchanged despite concerns that the deteriorating virus situation in India could significantly dent demand for oil.

It was another mixed session for equities in Asia and European shares were mostly in negative territory today, finding little support in Monday’s record close on Wall Street. The S&P 500 just about managed to eke out gains to close at an all-time high, while the Nasdaq Composite achieved its first record close since February. The tech-heavy Nasdaq Composite had been lagging other Wall Street indices ever since the surge in bond yields put the spotlight on bloated valuations. However, with more than 84% of S&P 500 companies that have reported their Q1 results delivering an earnings beat, fallen behind tech stocks are coming back in favour, especially after Tesla posted record revenue yesterday

Moreover, with the Fed repeatedly assuring that it’s too soon to think about scaling back stimulus, and the impressive vaccination pace in the US allowing businesses to plan for a post-pandemic world, there’s little incentive for traders to remain cautious.

Tech earnings will continue in earnest today, with Microsoft and Alphabet reporting after the market close, along with traditional companies such as General Electric and Visa.