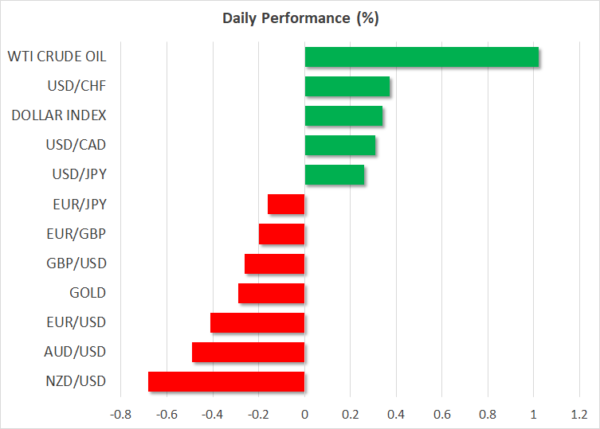 The US dollar is still searching for direction. The reserve currency took a hit yesterday in the wake of a softer-than-expected ISM manufacturing survey and another reminder from Fed Chairman Powell that the world’s largest economy isn’t out of the woods yet, only to bounce back early on Tuesday.

While the ISM report fell short of the rosy forecasts, the headline index remained at elevated levels and the details were quite encouraging, signaling that manufacturers essentially can’t keep up with sizzling demand because of supply chain disruptions. The Markit survey for April echoed the same theme, with many companies unable to satisfy surging demand amid production constraints.

All this fits into the narrative currently driving the dollar – the US recovery is starting to fire up thanks to an ocean of federal spending, but the improvement isn’t spectacular enough yet for the Fed to consider decreasing its liquidity dose. This implies that it’s probably too early for a powerful dollar rally that reflects the strength of US fundamentals relative to other economies. 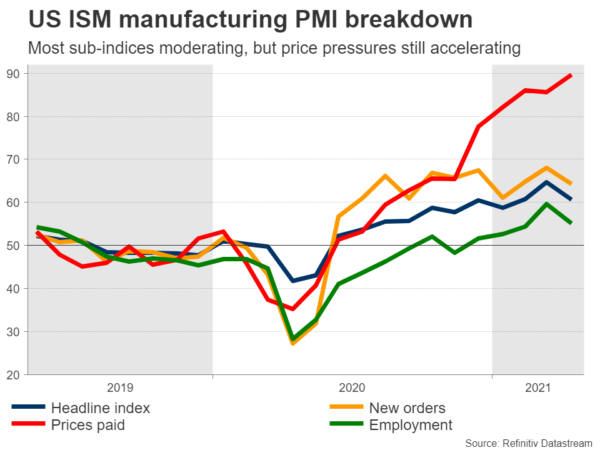 In a few months’ time though, once the labor market hopefully heals its wounds, the Fed could shift gears and the repricing of the dollar could happen quickly as yields resume their ascent, especially if market participants are still net-short by then. For now, all eyes are on this week’s payrolls release.

Sterling back in vogue amid tapering whispers

It is shaping out to be a crucial week for the British pound, which outperformed all its major competitors yesterday. The Bank of England meets on Thursday and there’s a lot of buzz that policymakers could signal a slowdown in their asset purchases, reflecting the smooth re-opening of the economy and the wildly successful vaccine rollout.

The catch is that political risk may dampen any tapering enthusiasm in the markets. Voters in Scotland will elect their new parliament on the same day, and opinion polls suggest a majority for pro-independence parties. In this case, the battle for a second Scottish referendum could commence, creating a headache for Prime Minister Johnson that might ultimately lead investors to price a political risk premium back into the pound.

In equity markets, it was a mixed session. The S&P 500 and the Dow Jones managed to squeeze out some gains, though the tech-heavy Nasdaq edged lower as investors rotated away from some ‘growth stories’ with bloated valuations. What’s striking is that several of these growth names have taken a sharp hit even after reporting promising results, which highlights just how inflated the market’s expectations were going into this earnings season.

In the commodity arena, gold prices came out fighting this week, drawing power from the retreat in US yields. We are almost at the ultimate stage of the cycle for bullion, where inflation begins to accelerate but the Fed holds its foot heavy on the QE gas for a while longer, keeping real rates under pressure and allowing the yellow metal to thrive. The endgame is still bearish as the Fed will be forced to taper down the road, but there could be a few months of glowing performance for gold in the meantime.

Finally, the RBA didn’t say much overnight. It kept its policy settings and language broadly unchanged and signaled that any major decisions will be taken at the July meeting. The reaction in the aussie was muted.