The Bank of England (BoE) kept its key policy parameters at today’s announcement, keeping the Bank Rate at 0.10% and maintaining its asset purchase target at £895 billion. However, in a modest tweak towards less accommodative monetary policy the BoE reduced the pace of its weekly asset purchases by £1 billion per week to £3.44 billion per week.

The central bank now sees an earlier economic recovery, lifting its GDP growth forecast for 2021, but lowering its GDP growth forecast for 2022. So long as the economy continues to improve we believe a further moderate tapering of asset purchases is likely at the August announcement. At this time however, we do not expect an initial policy interest rate increase until the first half of 2023.

The Bank of England (BoE) announced its monetary policy decision, leaving its key policy parameters unchanged. The BoE kept its Bank Rate at 0.10% and also maintained it bond purchase target at £895 billion. The central bank has previously signaled that it intends to complete its asset purchases around the end of 2021.

There was however a modest tweak in the BoE’s policy approach in that it said it would slow the pace of bond purchase which, mathematically, is a natural corollary if the purchase program is to persist until late this year. In fact, the BoE was quite specific with respect to its purchase plans between now and August, indicating it would conduct three bond-buying operations per week, with each being £1.147 billion in size. That equates to weekly bond purchases of £3.44 billion, down from a purchase pace of £4.44 billion per week over the past several weeks.

The Bank of England said this operational change should not be interpreted as a change in the stance of monetary policy, but it nonetheless at least represents some type of change. The Bank of England also said the outlook for the U.K. economy remains uncertain and that it does not intend to tighten until there is clear evidence of a rebound. Focusing specifically on the path of asset purchases, however, at the newly reduced purchase pace the BoE would reach its asset purchase target by around late October or early November. Accordingly, so long as the economy continues to improve, a further moderate tapering in the pace of bond purchases seems likely at the August announcement. Given that inflation pressures remain muted at this time, we currently do not expect an initial rate increase until the first half of 2023, although an initial hike very late in 2022 cannot be ruled out.

The other aspects of today’s announcement were either hawkish or upbeat. The vote was not unanimous, but rather 8-1 in favor of maintaining the current policy approach. One policymaker, chief economist Haldane, dissented in favor of reducing the asset purchase target by £50 billion. Meanwhile, the central bank also revised its GDP growth forecast significantly higher. The BoE now projects 2021 GDP growth of 7.25% (compared to 5% in February) but sees 2022 GDP growth at 5.75% (compared to 7.25% previously). Meanwhile, with respect to CPI inflation the BoE expects 2021 inflation at 2.5% (compared to 2% in February) and 2022 inflation at 2% (compared to 2.25% previously). Overall, by potentially allowing for a slightly quicker path of exit from its accommodative monetary policy stance, we view today’s announcement as a modest upside risk to our forecast for the pound. At the same time, it is also broadly consistent with our medium-term profile which already anticipates modest gains in the pound versus the U.S. dollar over time, and a stronger pound versus the euro. 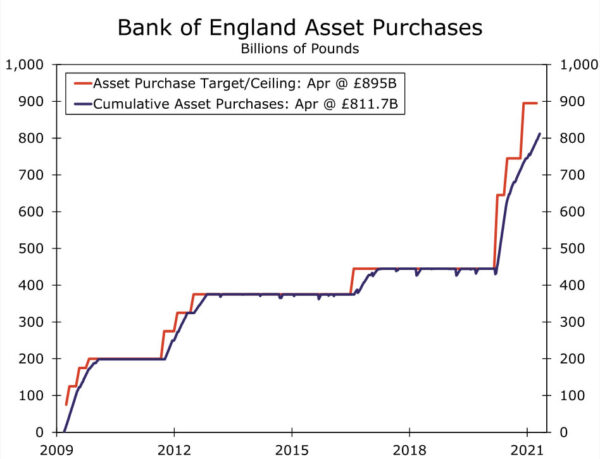