An implosion in crypto kicked off a wild day of trading and the FOMC minutes once again emphasized the tricky task of tapering. The US dollar led the way while the New Zealand dollar lagged. Initial jobless claims are due up next. The Premium longs in GBPUSD and EURNZD hit their final targets for 420 pips and 220 pips respectively. Below are the latest charts on Cardano and Ethereum. 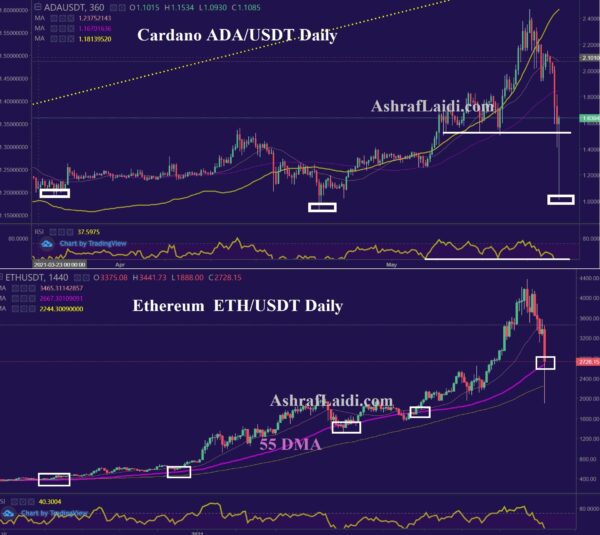 $43,000 in bitcoin was repeatedly tested this week and finally gave way in part due to Chinese officials reiterating warnings against commercial crypto transactions. It was a spectacular break that culminated with a fall to $30,000 (precisely) at the low as exchanges went down.

We’ve seen time and time again how exchange outages spark liquidation followed by strong bounces as word gets out and then they come back online. Bitcoin bounced all the way back to $40,000 afterwards.

Those moves were sharp, but it was even wilder elsewhere in crypto with ETH falling as low as $1850 – a 46% intraday drop.

For the first time in its clearest form, the rout in crypto spread to broader risk assets. Equities tailed the moves, albeit to a much smaller extent, bonds briefly caught a bid and yen crossed dipped. The broader market moves disappeared as crypto bounced but a second hit arrived when the Fed minutes offered the faintest whisper of tapering.

‘A number of participants suggested that if the economy continued to make rapid progress toward the Committee’s goals, it might be appropriate at some point in upcoming meetings to begin discussing a plan for adjusting the pace,’ the Minutes said.

The swiftness at which markets reacted to that is worrying, with the US dollar strengthening 30-40 pips across the board and equities falling back to session lows. It underscores how difficult it will be for the Fed to pull off an actual taper, let alone a rate hike.

Looking ahead, if the high CPI print couldn’t keep the dollar bid, neither will the minutes. They landed in a jittery market and by the end of day equities had nearly traded back to flat.