Swissie Falls on Strong US Inflation

The Swiss franc is down considerably on Friday. In North American trade, USD/CHF is trading at 0.9025, up 0.63% on the day. The pair has punched above the symbolic 90-level and is trading at a one-week high.

The well-respected KOF Economic Barometer continues to break new records. The index rose to 143.2 in May, up from the April reading of 136.4 (revised from 134.0). The significant increase was driven by strong numbers from manufacturing and foreign demand. The barometer has now risen for a fourth straight month, and the near-term outlook for the Swiss economy remains positive, assuming that the battle against Covid continues to progress.

Over in the US, we could see inflation jitters reappear, as a key inflation gauge was stronger than expected. The Core PCE Index, which is the Federal Reserve’s preferred inflation indicator, rose to 3.1% in April (YoY), above the consensus of 2.9% and the previous read of 1.9%. The Fed will no doubt trot out the usual suspects, as Fed Governors will dutifully state publicly the rise in inflation is transitory and will not result in any change in policy.

At the same time, there have been some Fed members who have not ruled out a debate on tapering, and more voices could urge a taper talk from the Fed, given the latest PCE data. The US dollar is broadly higher on Friday and if investors feel that higher inflation is here to stay, the dollar could show more gains early next week.

The week wraps up with UoM Consumer Sentiment, which is expected to rise to tick higher to 89.9, compared to 89.8 previously. 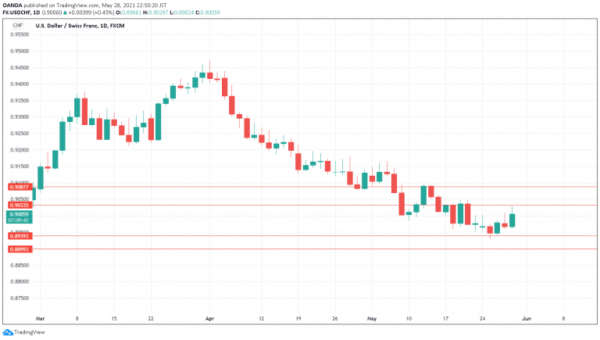