The Australian dollar has dropped sharply since the FOMC meeting on Wednesday. In the North American session, AUD/USD is trading at 0.7568, down 0.54% on the day.

There had been expectations that the monthly FOMC meeting might be a sleeper, given the constant Fed message that policy would remain ultra-loose. Given this steady drumbeat from the Fed, the markets can’t be blamed for being lulled to sleep ahead of the meeting. In the end, it was anything but business as usual from Powell & Company. The Fed signalled on the dot plot an earlier timeframe for interest rate hikes, indicating that there could be two rate hikes in 2023. Prior to the meeting, the Fed had not planned to hike rates before 2023. There are Fed members who were even more hawkish, as seven members out of 17 are projecting at least one hike in 2022.

The Fed’s new message is that the economy is recovering faster than expected, and the Fed revised upwards its growth and inflation projections. The FOMC meeting could mark the start of a significant shift in policy, as the new buzzword investors may start seeing is ‘policy normalisation’.

The US dollar jumped after the FOMC meet, with AUD/USD plunging 1.01% on Wednesday. The Aussie currently finds itself at its lowest level since April 1.

Overshadowed by the Fed were monster job numbers in Australia, as the recovery continues to deepen. The economy created 115.2 thousand jobs in May, up from -30.6 thousand and crushing the forecast of +30.5 thousand. The unemployment rate fell to 5.1%, down sharply from 5.5% beforehand. This is significant, as RBA Governor Lowe has stated that unemployment needs to fall to 5% before the bank will consider tightening policy. 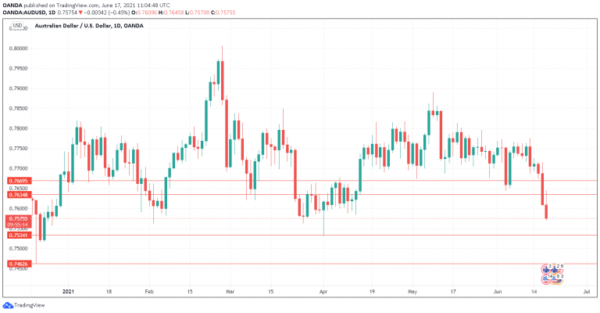