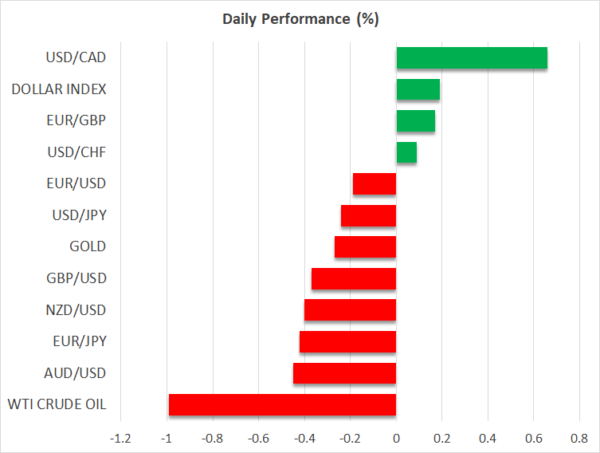 The sense of caution that dominated the bond market recently is now spreading over into stocks and currencies, leaving investors puzzled over what’s behind all the gloom. The initial spark seemed to be a short squeeze in bonds that hammered yields lower, but with the move persisting and spilling over into other asset classes, it might run deeper.

Markets seem to be grappling with the fear that the virus isn’t going away despite widespread vaccinations in the major economies. New and more resilient mutations might be a perpetual phenomenon that wreaks havoc, especially in developing countries, ultimately keeping a lid on the recovery. The overwhelming firepower from governments and central banks was enough to fight the pandemic, but not enough to annihilate it.

Several nations from Asia to Europe to Australia are now fighting a new outbreak as the Delta variant spreads like wildfire. The good news is that hospitalizations remain low in most places. Still, with new cases spiraling, restrictions that hamper economic activity could remain in place for longer.

This has seen investors revert back to their pandemic playbook. Stocks are under selling pressure, with reopening plays getting hit the hardest while mega-cap tech names hold their ground amid hopes that tech heavyweights can bloom in any weather. As we’ve seen many times during this crisis though, virus worries are self-correcting for equity markets. If the health situation escalates, it simply implies more fiscal and monetary medicine for longer.

The cautious mood left its marks on oil prices too, which continue to lose ground even after OPEC reached a supply deal. The cartel and its allies finally agreed to increase supply by 2 million barrels a day by year-end, with the United Arab Emirates and a handful of other players being awarded higher production quotas.

On the bright side, the deal adds some certainty and diminishes the risk of a fracture that results in all-out production by some members. However, it also locks in a generous supply increase at a time when the demand outlook is shaky. This could take the shine off oil prices for now, especially if OPEC pushes ahead with plans to restore all its lost output by next year and American shale producers step up their game too.

Across the risk spectrum, the dollar and yen are back in fashion alongside government bonds as investors seek some protection. The greenback got an added boost on Friday after US retail sales overcame expectations, painting a picture of an economy that’s booming as consumers have been let loose.

Sterling and gold struggle too

The biggest underperformers in the FX arena today are the commodity currencies, especially the oil-sensitive Canadian dollar. Sterling is also under heavy pressure thanks to its high correlation with stock markets.

Some news that the UK health minister has tested positive for covid likely added fuel to the retreat. The prime minister and the chancellor are also self-isolating, which underscores the government’s gamble to open up everything and bet on the vaccines doing the heavy lifting in preventing hospitalizations.

It’s a tough day for gold prices too. A stronger US dollar is anathema for bullion, which is priced in dollars and therefore becomes less attractive for foreign investors as the greenback strengthens. The striking part is that real Treasury yields are pinned down near record lows yet gold still can’t sustain a rally, which is a bad look.

The economic calendar is empty today but there’s an ECB meeting later in the week to keep things exciting, as the earnings season fires up.