The European Central Bank will try to demonstrate that it is serious about hitting its new inflation target when it concludes its meeting at 11:45 GMT Thursday, probably by locking itself into negative rates for longer. That could solidify the coming divergence with other central banks that will be raising rates, which is bad news for the euro.

ECB President Lagarde promised to deliver new policy signals at this meeting, so it should be interesting. The central bank has been unable to hit its inflation target sustainably for a decade now, and yet it raised that target earlier this month. It now wants to demonstrate that it is committed to hitting this higher target.

This means signaling that negative interest rates are here to stay. If the ECB is really serious, it could also signal more quantitative easing for longer. As things stand, the pandemic asset purchase program will end next year. Policymakers want to stress that stimulus won’t be dialed back automatically just because of that. They could extend that program or replace it with something similar. 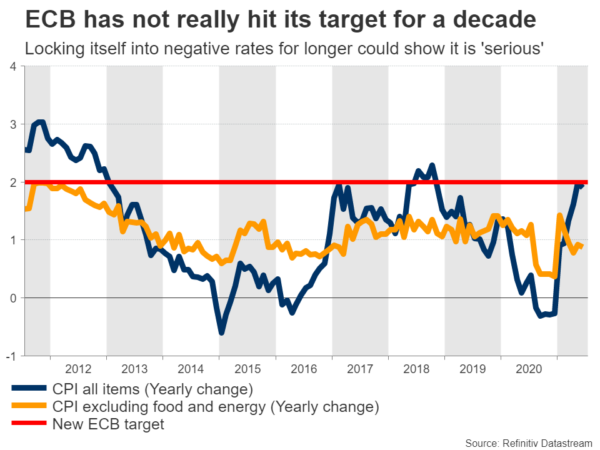 Another option is decoupling the forward guidance on interest rates and quantitative easing. Until now, the ECB kept repeating that it will end asset purchases shortly before it raises interest rates, some time in the distant future. Separating the two would imply that asset purchases can continue even after rates rise.

The bottom line is that the ECB doesn’t want markets to think it is heading towards the exit, like the Fed or the Bank of England are doing. It wants to stress that it will remain in cheap money policies far longer. That way it gains credibility on inflation.

The latest developments in the Eurozone support the ECB’s cautious stance. While reopening momentum is still strong, the Delta variant is spreading like wildfire, threatening the economic outlook.

Spain, Portugal, and the Netherlands have seen new covid outbreaks lately, despite widespread vaccinations. While hospitalizations and deaths are still low, mild restrictions to control the spread are plausible. In fact, some regions in Spain have already imposed new curfews. 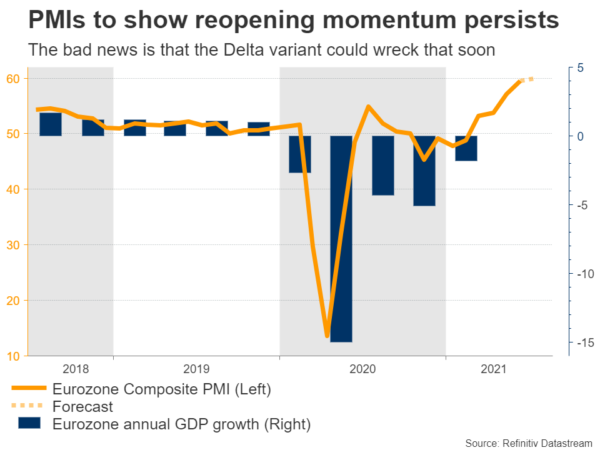 We’ll find out how the economy is doing early on Friday when the PMI surveys for July are released. These tend to be a big event for the euro. Forecasts point to an improvement overall in the PMIs, with a slight slowdown in the manufacturing sector being more than offset by an acceleration in services.

All told, with the ECB locking itself into negative rates but the Fed and other major central banks moving towards rate increases over the coming years, the outlook for euro/dollar seems negative. The last time these two central banks drifted in opposite directions was in 2014-2015, a period when euro/dollar was decimated.

What’s the main risk around this view? It’s probably the Delta variant. Not only has it infected several countries in Europe but it is also rampaging Australia and Asia, leading to fresh lockdowns. Emerging market economies are highly vulnerable given their low vaccination rates.

If this impacts global growth, that could slow down the Fed’s normalization plans, potentially lifting euro/dollar. That said, it is unlikely to derail those plans. The Fed will still normalize, it just might take longer until we get there, so the overall trend in euro/dollar still seems negative.

Taking a technical look at the pair, further declines could encounter support near the 1.1700 handle, a potential break of which would turn the focus towards 1.1620.

On the upside, if the ECB doesn’t sound dovish enough or if global growth worries make the Fed hesitant, initial resistance to advances could come from the 1.1880 zone. If the bulls overcome that, their next target may be the 1.1980 region.