After Dovish Fed and GDP Miss, Can PCE Inflation Rise Rescue the US Dollar?

The US dollar’s upswing since June has run into trouble as investors are once again questioning how aggressively the Fed will move to scale back its vast monthly asset purchases. Those doubts were heightened after the Fed indicated that a taper decision is still months away and after the US economy grew less than expected in Q2. But the week isn’t over yet and there’s still crucial data coming up on US consumption and PCE inflation for June. Can they rekindle the dollar’s bullish thrust?

It’s official – taper discussions are in full swing at the Fed. Yet, a timeline is nowhere in sight and Fed Chair Jerome Powell isn’t in a hurry to set a firm date either. Clearly, policymakers want to see what effect the end of the enhanced unemployment benefits in September will have on the labour market and whether the surge in inflation will show signs of peaking over the next few months.

If Powell had his way, a decision would probably be put off until early next year. But a growing chorus of FOMC hawks means it will be difficult to delay a move beyond the end of this year. Either way, the odds of the Fed making a call on tapering in September are diminishing and this is creating downside pressure on the dollar as pushing back tapering would also determine how soon the Fed funds rate can start to go up.

Hence, Friday’s numbers on personal income and spending, as well as the all-important PCE inflation print may only have a limited impact in terms of altering the outlook for Fed policy.

Personal consumption, which has somewhat disappointed lately, is expected to have increased by 0.7% month-on-month in June. But personal income likely fell by -0.3% m/m as the boost from the stimulus payments and other federal support continued to fade. 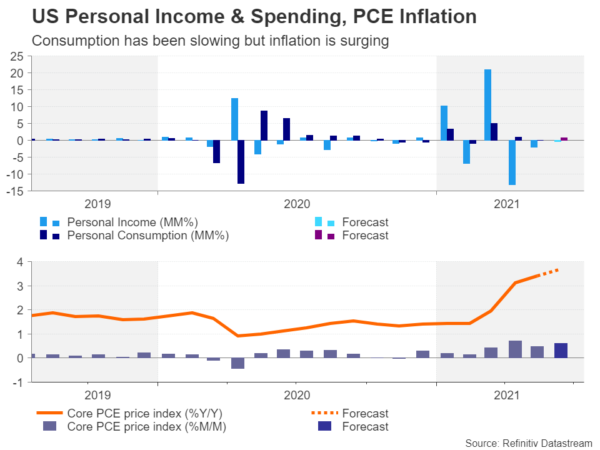 As for the core PCE price index, which is what the Fed pays most attention to for gauging inflation, analysts are predicting a monthly increase of 0.6% and an annual rise of 3.7% – both well above historical averages, well, that is if you exclude the 1970s.

Dollar could do with some support

Should the core PCE price index soar more than expected, it could help put a floor under the dollar’s latest selloff, especially if it’s backed by strong consumption data. The dollar index is currently seeking support at the 61.8% Fibonacci retracement of the May – July upleg at 91.95. If this support fails, the 50% Fibonacci of 91.49 will be critical as the 50-day moving average happens to be in the same area.

However, should buyers re-enter the market, a rebound towards the 78.6% Fibonacci of 92.60 would not be too farfetched, though sharper gains would be more difficult. The dollar index’s best chance of reclaiming the 93.0 level and challenging the July top of 93.19 in the short term is if risk aversion were to return and draw in some safe-haven demand for the greenback.