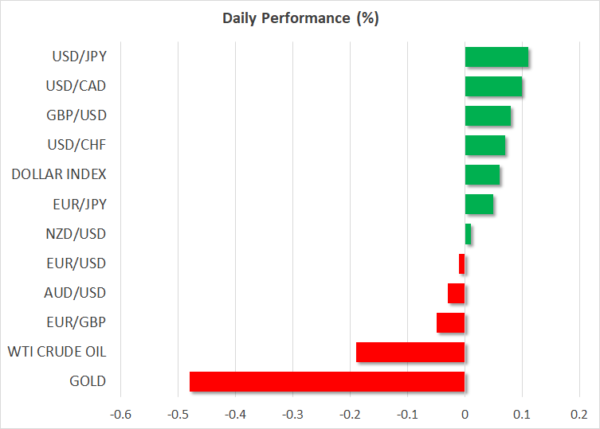 After a volatile week, markets were in much steadier waters on Wednesday, with the US dollar halting its losing streak and equities holding onto their gains. Optimism that the global economic recovery from the pandemic will only be slightly dented by the Delta variant and central banks will continue to pump plenty of stimulus to support growth is the primary reason for this turnaround.

Fears of aggressive Fed tightening have receded somewhat after Kaplan – one of the Fed’s biggest hawks – expressed doubts about the outlook. In the meantime, Congress is making progress with advancing President Biden’s economic agenda.

The House of Representatives on Tuesday voted to move forward with the $3.5 trillion budget blueprint. Although the process is almost certain to drag on well into the fall, there’s growing confidence that the Democrats will be able to resolve their differences and pass both the budget and infrastructure bills in due course.

Equities not too fussed about Delta strain

The recent regulatory crackdown had pummelled popular tech stocks in Hong Kong and China but upbeat earnings by JD.com this week has allayed worries that the measures would become a significant drag on revenue.

The SSE Composite index closed 0.7% higher, though Hong Kong’s Hang Seng index slipped today. Japan’s Nikkei 225 index also bucked the trend, giving up earlier advances to close marginally lower. The losses came after a Bank of Japan policymaker warned chip shortages may continue to serve as a source of uncertainty for the global economy, while the Japanese government looks set to place more regions into a state of emergency amid still soaring virus cases.

However, for investors on Wall Street, lockdowns in Australia, Japan and other Asian-Pacific countries are of minor concern. With China appearing to have contained an outbreak of the Delta variant in the country, therefore averting a major disruption to global supply chains, regional woes won’t have a material impact on US equities.

Meanwhile, easing Fed taper expectations have boosted Wall Street’s tech behemoths, which had already benefited from defensive plays during the bout of risk aversion. The Nasdaq 100 and Composite, as well as the S&P 500 all closed at all-time highs on Tuesday.

Dollar selloff takes a breather ahead of Jackson Hole

But the bounce in risk appetite may be cooling as US stock futures were barely in positive territory and the US dollar was slightly firmer. There’s no doubt that the greenback’s downside correction has breathed some life into the battered commodity-linked currencies. But whether the rebound can be extended will likely depend on what Fed Chair Powell signals about tapering when he speaks on Friday from the Jackson Hole conference.

The aussie was last trading flat versus its US counterpart, while the loonie and kiwi were 0.1% higher. The euro and pound were also flat.

In commodities, gold fell back after failing to crack above the $1,800/oz level and as the dollar steadied. Oil prices were weaker too on Wednesday, having surged about 8% from Monday’s lows.