Week Ahead – The Calm Before Nonfarm Payrolls Storm

The calendar is void of any central bank meetings next week, so all eyes will be on the latest US employment report. It will be infinitely important in determining how soon the Fed pushes the taper button. Beyond that, there’s also a heavy dose of data releases from the Eurozone, Canada, and Australia.

Inflation, jobs, and the dollar

There’s been a lot of talk lately about the Delta outbreak hitting the US economy and slowing down the Fed’s normalization plans. Some early signs indeed suggest economic growth is losing steam. For instance, the latest composite Markit PMI fell in August thanks to worsening supply chain disruptions, while consumer confidence cratered as virus fears returned.

That said, the wheels are not coming off either. The economy is already larger than it was pre-crisis, the labor market is recovering at a stunning pace, and inflation is unlikely to cool anytime soon. The Supreme Court just canceled the ban on evictions, which means rents could now begin to spiral, feeding the inflation story. Best of all, Congress is pushing ahead with another massive round of infrastructure spending. 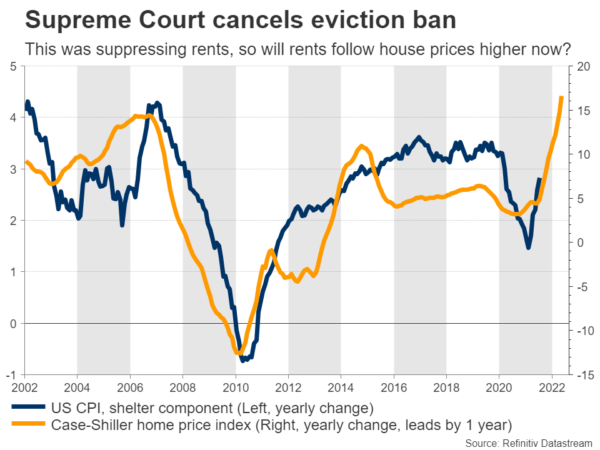 Hence, the Delta outbreak looks like a mere speed bump in the recovery road. Even in a worst-case scenario where it does hurt the economy, that would also put more pressure on the politicians to get something done quickly, increasing the chances for a gigantic spending package.

The Fed is clearly preparing the markets for a tapering decision this year. It’s not a question of whether they will taper, but rather when they will begin this process and how long it will last. Investors are still debating whether this will be announced in September, November, or even December.

The jobs report on Friday could go a long way in settling this debate. Nonfarm payrolls are expected at 763k in August, pushing the unemployment rate down two ticks to 5.2%. That would leave America some 5 million jobs shy of a full recovery. Subtract around 2.5 million people that retired early because of the pandemic, and we could be back to full employment by the turn of the year if this pace continues. 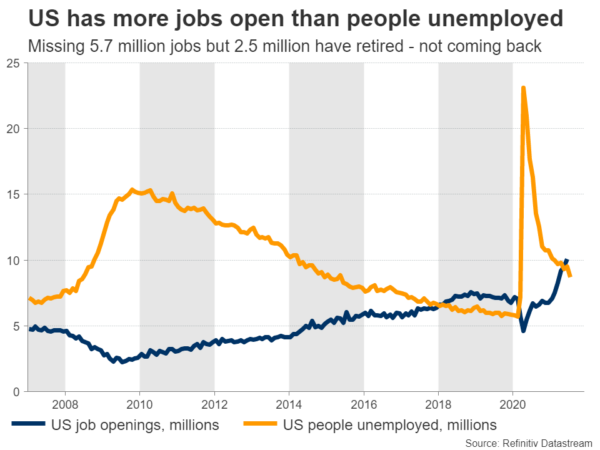 As for the dollar, the overall picture remains promising. Whether the Fed pulls the tapering trigger in September or November doesn’t matter much. It is still years ahead of the ECB and the BoJ in normalizing, which ultimately argues for the dollar to shine against the euro and yen as investors warm up to carry trades again.

Aside from the employment report, markets will also focus on the ISM manufacturing and services PMIs for August, due on Wednesday and Friday respectively.

Over in Europe, the ball will get rolling with preliminary German inflation numbers for August early on Monday. The Eurozone-wide inflation print will be released on Tuesday, ahead of unemployment figures for July on Wednesday. Then on Friday, the spotlight will fall on the latest edition of retail sales.

The Eurozone has come back to life lately as vaccinations went into overdrive and social restrictions were rolled back. Alas, the recovery pales in comparison to America’s, as the euro area economy is still much smaller than it was pre-crisis. And the risk is that this latest recovery phase was simply a reopening boom that fades soon. 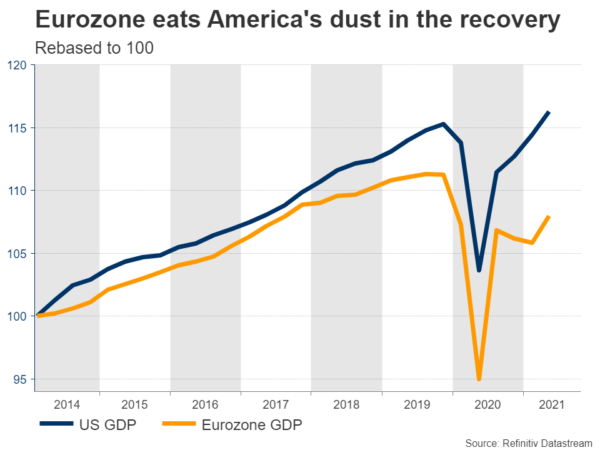 On the bright side, Europe has a very high vaccination rate. This means the Delta variant is less of a threat. Additionally, the Recovery Fund money is finally being rolled out, which will hopefully help struggling economies like Italy get back on their feet.

The problem is that this recovery package is way too small to make a real difference and there isn’t much political appetite for any more, especially with government debts ballooning already.

Long story short, the Eurozone is doing better but nothing impressive. The ECB is well aware of this, hence why it doubled down on its commitment not to raise rates over the coming years. That’s bad news for the euro, which could struggle against currencies whose central banks are moving towards higher rates.

Moving to the commodity-linked currencies, Canada’s GDP stats for Q2 are out Tuesday. The Canadian economy continues to hum along nicely, enjoying the benefits of a very high vaccination rate and elevated oil prices, allowing the central bank to roll back its asset purchases.

As for the loonie, the currency has been at the hands of risk sentiment lately, swinging wildly alongside stock markets and oil prices. The big picture remains bright thanks to the Bank of Canada’s lead in normalizing policy, although a lot will also depend on how commodity prices fare. Beyond that, there’s also an election coming up next month. 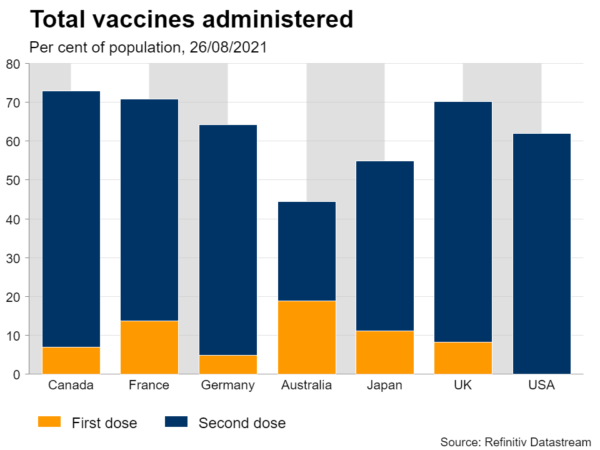 Over in Australia, things don’t look so good. Most of the country is trapped in a strict lockdown, with the government waiting for the nation’s vaccination rate to rise to around 70-80% before relaxing restrictions. This means several more weeks of lockdowns, which will inevitably hit the economy. Hence, the upcoming GDP data for Q2 on Wednesday are already outdated.

The RBA stuck to its guns lately, signaling it will go ahead with reducing its asset purchases soon despite the onslaught of negative news, but there is a strong chance it abandons those plans at its next meeting. As for the aussie, it has been demolished lately and the pain train could continue as long as the lockdowns rage, especially with China losing steam too.

Speaking of China, the nation’s PMI business surveys for August will also hit the markets on Tuesday.