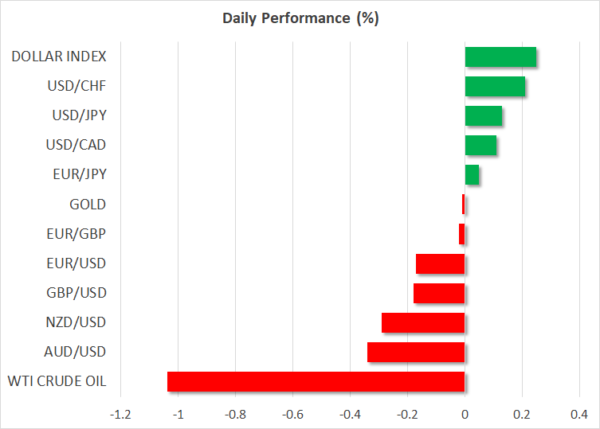 The US dollar is recovering from one-month lows on Monday, having deepened its latest slide on Friday following the mixed readings on the labour market. The US economy added far fewer jobs than anticipated in August, but the unemployment rate nevertheless dropped to a new post-pandemic low of 5.2% while wage growth accelerated.

Traders had been speculating about whether another stellar report would give the Fed the green light to announce tapering in September. But the unexpected slowdown in hiring is more supportive of a late fall or end-of-year action. The overall take from the NFP numbers was that the Federal Reserve will likely intensify taper discussions in September but not reach a decision until its November meeting.

However, whilst the moves in FX markets indicated a big adjustment to Fed taper expectations, bond markets signalled otherwise. The yield on 10-year Treasury notes whipsawed on the back of Friday’s data, which also included the ISM non-manufacturing PMI. The closely watched gauge on the services sector fell in August compared to July but remained elevated. More importantly, the employment and new orders sub-indices were little changed, suggesting the NFP miss was likely a blip.

Even if the American economy is losing some momentum, there’s still a very strong case for the Fed to pull back some of its stimulus in the coming months so the tapering narrative hasn’t really changed much after the soft jobs data.

The dollar index was last up 0.2%, propped up by Friday’s one-week high in the 10-year yield. US markets are closed today due to the Labor Day holiday, but Wall Street futures are inching higher, taking their cues from Asia, following a mixed finish to last week.

Stocks in China and Japan surged on Monday, lifting the mood globally. China’s CSI 300 index closed up 1.9% after authorities announced plans for a new stock exchange, which will serve small- and medium-sized enterprises and be based in Beijing. Moreover, the government also tried to allay fears of further regulatory crackdowns by reinforcing its support for private enterprises.

In Japan, meanwhile, local equities extended their gains following Prime Minister Suga’s surprise resignation on Friday. The Nikkei 225 index added another 1.8% and the Topix index jumped to a 31-year high on hopes that Suga’s successor will push for more fiscal spending and have better success in bringing the latest outbreak of the coronavirus under control.

Amid the light schedule for the rest of the day, European markets followed their Asian counterparts higher.

RBA coming up, ECB in spotlight too

Central banks will be dominating the agenda this week, with investors bracing for possible tapering by the European Central Bank on Thursday. ECB policymakers have stepped up their hawkish rhetoric lately as the Eurozone recovery has made substantial progress during the summer. Expectations that the ECB might slow its asset purchases as early as this week have been aiding the euro’s rebound versus the greenback over the past couple of weeks. However, even if policymakers do decide to ease up on their stimulus slightly, they’re unlikely to signal any further tapering before the end of the year, potentially disappointing some investors and capping the euro’s gains.

The Australian dollar is also facing downside risks heading into Tuesday’s policy meeting by the Reserve Bank of Australia. Prolonged lockdowns in many parts of Australia could force a policy U-turn by the RBA, which had announced a reduction in bond purchases as of September. The aussie is today’s worst performer, although profit taking could be as much a factor for the losses as caution ahead of the RBA meeting, following the impressive bounce back from August’s 9½-month trough.

Aside from central bank meetings, traders will also be keeping an eye on Fed speakers this week for more clues about the taper timeline.