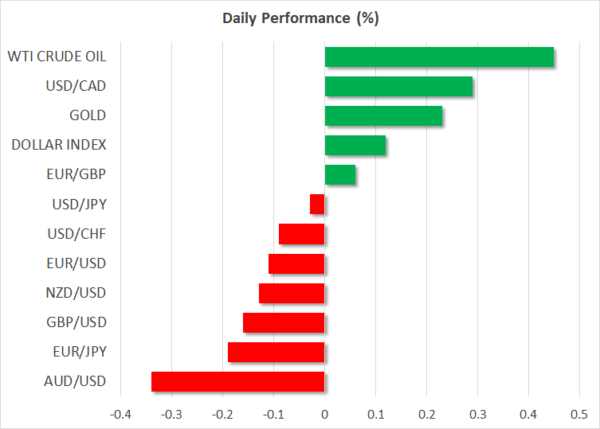 The US dollar recouped more lost ground from the late August selloff as investors grew increasingly doubtful about whether Friday’s softer-than-expected jobs report would derail the Fed’s taper timeline. However, even though the Fed will likely still go ahead with tapering its monthly asset purchases later this year, markets are a little more worried about the inflation outlook.

Not only do the supply bottlenecks and shortages not seem like they will get resolved anytime soon, meaning high inflation becomes stickier over time, but a slower recovery of the labour market might keep the Fed active in the bond market for longer, further fueling price pressures.

Inflation fears could be behind the unexpected pickup in Treasury yields since Friday. The 10-year Treasury yield scaled an eight-week high of 1.3850% on Tuesday but had eased to around 1.35% today.

The dollar index also pulled back slightly after touching one-week highs in Asian trade. It was last quoted at 92.66. Investors will be keeping an eye on Fed speakers over the next 48 hours, starting with the New York Fed’s Williams later today. Earlier, Bullard reiterated his call for the Fed to begin tapering in an interview with the Financial Times.

Gold tumbles, oil steadies but loonie slips ahead of BoC

Higher yields and the resurgent dollar weighed heavily on gold on Tuesday, which slumped to a 1½-week low of $1791.90/oz. The precious metal was attempting to reclaim the $1,800 level today but whether it succeeds might depend on how strongly Fed officials back an immediate start of tapering.

Oil prices were heading higher too on Wednesday, supported by a sluggish restart of operations of oil producers in the Gulf of Mexico following the shutdowns caused by Hurricane Ida. However, this failed to lift the Canadian dollar, which slid further today, breaching the C$1.27 per US dollar level.

The Bank of Canada is expected to keep policy unchanged when it announces its decision at 14:00 GMT. Although the Canadian recovery has picked up speed lately and Friday’s employment data will likely confirm this, expectations of a more cautious BoC due to the global headwinds from the Delta variant could be holding the loonie back.

However, if the BoC reaffirms its tightening cycle and signals further tapering in October, the loonie could bounce back, potentially aiding the aussie and kiwi as well, which have also been struggling this week.

In European currencies, both the euro and pound remained on the backfoot versus the greenback. There is heightened speculation the European Central Bank will pare back its asset purchases when it meets tomorrow but the boost to the euro has been modest as the Fed is still expected to end its pandemic stimulus long before the ECB.

The single currency was last trading near intra-day lows at $1.1816, while cable hovered at one-week lows around $1.3750, on track for its third straight day of declines.

Signs that UK growth following the reopening of the economy has already peaked have been somewhat weighing on sterling lately. But there was another blow to the pound’s bullish prospects on Tuesday after Prime Minister Boris Johnson set out plans to raise taxes, making the UK the first Western country to turn to higher taxes to fill the growing budget gap that’s resulted from the virus crisis.

Whilst Johnson’s ambition of significantly boosting funding for health and social care by hiking national insurance contributions has divided his party, he is likely to get the backing he needs in a parliamentary vote later today. However, there are concerns the tax hikes could hamper Britain’s recovery from the pandemic and this could prove to be a major drag on sterling in the medium term.