Having started the year on a strong note, the pound’s outlook has dimmed substantially lately as the initial boost from the economic reopening during the spring appears to be fading. The monthly GDP reading due Friday at 06:00 GMT is expected to show Britain’s economic rebound lost further steam in July. That could deepen the pound’s woes following Prime Minister Boris Johnson’s announcement of tax increases to pay for health and social care.

UK recovery not yet complete

The UK economy has made significant progress in recovering the lost output from the pandemic but so far, the data have been more or less in line with expectations, hence, much of the good news is already baked into the pound. If anything, investors have been somewhat disappointed that the rebound wasn’t even stronger this year given Britain’s world-beating vaccine rollout and looser virus restrictions in comparison to other major economies such as the Eurozone and United States.

Looking at PMI indicators for example, the reopening bounce peaked in May and growth has been moderating since. The actual data isn’t any more encouraging either in terms of projecting a quicker-than-anticipated timeline for closing the output gap, which is a key criterion for pound traders to become bullish again.

Speculators have been reducing their net long positions on sterling since late June, according to CFTC data, and are now the most bearish since the beginning of December. Another reason why investors are not as optimistic about the pound as a few months ago is that UK hospital admissions from Covid-19 have been rising steadily since the summer, stoking fears that more lockdowns may be inevitable, even with vaccines. 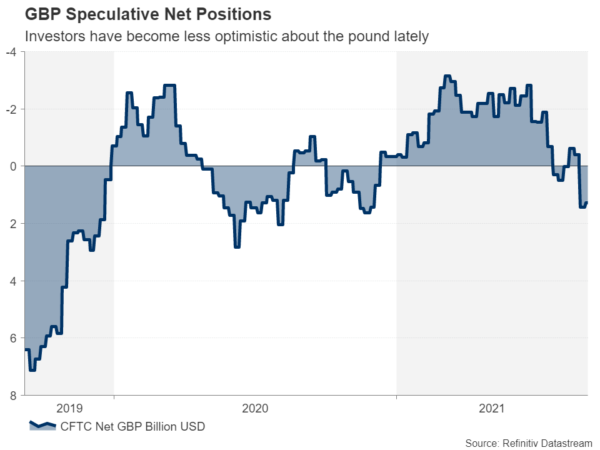 Friday’s numbers are unlikely to bring much cheer to the British currency, as the forecasts point to a solid but unspectacular set of prints for July. GDP is expected to have increased by 0.6% on a monthly basis, easing from 1% in the prior month. Year-on-year, growth is forecast to have cooled from 15.2% to 8.0% in July. Industrial and manufacturing production are expected to have risen by 0.4% and 0.1% m/m, respectively, while growth in the services sector, which makes up the bulk of UK GDP, is projected to have slowed from 1.5% to 0.7% m/m. 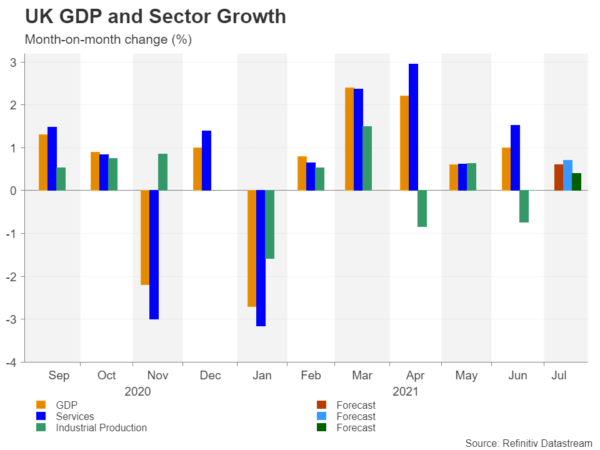 The pound slipped below the $1.38 level this week as the US dollar bounced back from its post-NFP lows. If the upcoming data fails to halt cable’s slide, the $1.37 level could soon be the next point of call to the downside followed by the $1.36 mark, which was the August trough.

On the other hand, a positive surprise in the headline GDP figure could spur the bulls to retest the $1.38 handle where the 50-day moving average is converging. A break above this important resistance area could open the way for the 61.8% Fibonacci extension of the April-June uptrend at $1.3889.

Higher taxes are a concern

However, after the government’s announcement on Tuesday of a tax hike to provide more funds to the National Health Service and pay for social care reform, it’s doubtful whether the pound will be able to quickly turn its fortunes around in the near term. The recent death cross between cable’s 50- and 200-day moving averages underscores the negative shift in the pair.

Tighter fiscal policy at a time when the economy has yet to make a full recovery and the pandemic is ongoing doesn’t bode well for future growth prospects. Johnson wants to finance the extra spending by raising the amount employees and employers pay for their national insurance contributions, something that could curtail both consumption and business investment.

On the plus side, the Bank of England appears to be edging closer to ending its pandemic stimulus, with MPC member Michael Saunders hinting of a rate hike next year. The question is, will this be enough to prevent the pound’s outlook from turning bearish?