The federal election is the headline event next week. Polling results suggest a tight race between the Conservatives and Liberals with a minority government the most likely outcome. As long as the pandemic remains a major threat, any pullback in government support that might challenge broader economic growth isn’t expected. Indeed, none of the major parties have been pushing for aggressive near term fiscal restraint.

The immediate question for the economy then, is if and when consumers will put their trove of pandemic savings to work. Purchases of retail goods appear to have declined over the summer—reflecting in part supply chain problems that limited the availability of products like motor vehicles. The slip in goods purchasing has also come as households shift spending back to hospitality services that were largely unavailable over the past year. We expect the monthly Canadian retail (merchandise) sales report to show lower sales over July and August. And our own tracking of card transactions points to a large recovery in hotel and restaurant spending over the same period. Next week’s release of the survey of food services and drinking places should further confirm the shift, with another jump in restaurant sales in July expected to build on a 20.3% surge in June. Meantime, the advance manufacturing sales report will likely show another decline in August as producers struggle to obtain inputs. Those pressures will result in higher consumer prices and push up near term inflation readings. 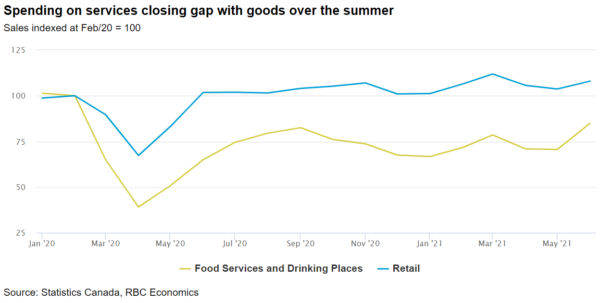 We expect Canadian retail sales to have declined 0.5% in July—a smaller decrease than Statistics Canada’s preliminary estimate for a 1.7% drop. Our tracking of card spending points to another decline of about 1.5% in August.

The US FOMC may provide more hints on when the pace of asset purchases will be dialed back. That said, the Fed is expected to keep its foot firmly on the accelerator with no increase expected in the fed funds target range until late next year. 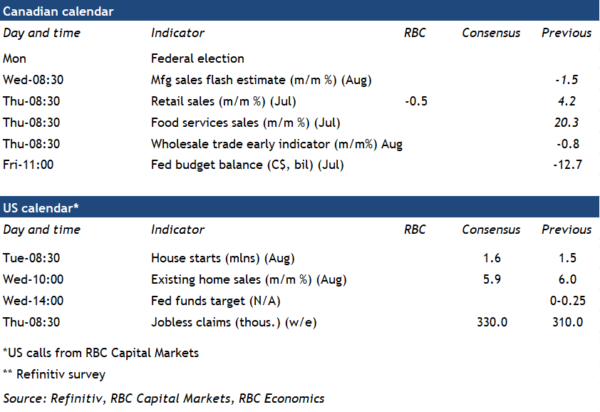