The Australian dollar has extended its gains in the Thursday session. Currently, AUD/USD is trading at 0.7293, up 0.71% on the day.

The Australian dollar is closely linked to risk, sentiment, and this connection sent the Aussie downwards earlier in the week but has since rebounded. The China Evergrande crisis sent shivers in the financial markets and weighed on the currency. However, investors’ nerves have been soothed somewhat as Evergrande said on Wednesday that it had reached an agreement to settle interest payments on a domestic bond, sending company shares sharply higher.

As well, risk appetite has risen after the FOMC meeting on Wednesday. Fed members signalled their readiness to taper before the end of the year, but this is contingent on the performance of the economy. In other words, the Fed is leaning towards a taper of its bond purchases but has not made any commitments in that regard. The Fed has also stressed repeatedly that there is no link between tapering and a hike in interest rates. This means that although a taper appears imminent, any rise in rates is further down the road. The dot plot shows that FOMC members are evenly split on whether the Fed will hike rates in 2022 or 2023, which indicates that the Bank is no rush to raise rates. This has lifted risk sentiment and sent the Australian dollar sharply higher on Thursday.

On the economic front, Australia PMIs for September pointed to a mixed picture. The Manufacturing PMI accelerated to 57.3, up from 52.0 beforehand. However, business activity declined for a third straight month, as the Services PMI came in at 44.9, up slightly from 42.9. The easing of Covid restrictions allowed resulted in both PMIs showing improvement in September. 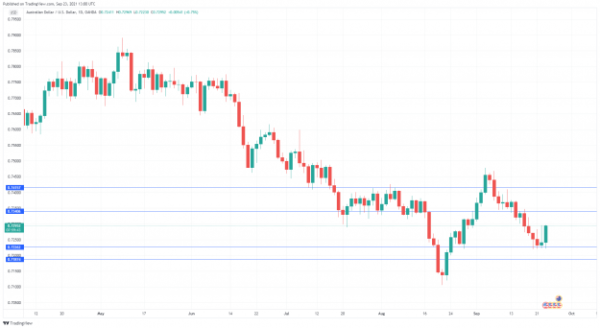