All eyes will be on Canada’s GDP report next week—and more specifically, its ‘official’ July estimate. A preliminary report in August called for a surprising 0.4% decline in GDP in July, despite an easing of COVID restrictions in provincial economies. We expect an upward revision of the July figure, with output holding steady at June’s level. Indeed, we saw a solid 1.3% rise in hours worked and indications of sharply higher spending on services over the summer—though these were offset by supply chain disruptions that weighed on manufacturing sales and construction activity.

The early estimate of August GDP should look better. While supply chain disruptions won’t go away any time soon, household spending likely continued to rise. The preliminary estimate of August retail sales was up 2.1% from July, and our own tracking of card transactions is pointing to a further recovery in spending on high-contact services like restaurants and hotels. The more pressing question is how much of that strength in services can be maintained during the fourth wave of virus infections. Broad lockdowns still look less likely given a high share of the population is vaccinated—and infection rates have shown some tentative signs of plateauing in parts of Canada. Fear of public spaces could still keep households closer to home, even as vaccine passport systems kick in, but the economic impact of the latest COVID wave is expected to be less severe. 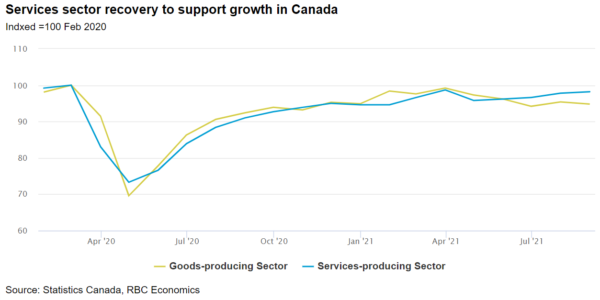 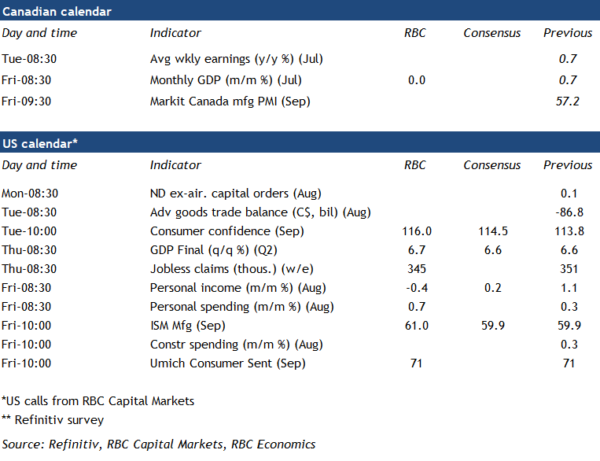