The week kicked off with market jitters over the prospects of contagion from the ongoing deleveraging in the Chinese property sector. Yet, positive data from the U.S. housing market and a reassuring message from the FOMC reinforced the notion that, with each passing week, the American economy is leaving the pandemic recession in the rearview mirror. As of the time of writing the S&P 500 is back up 2.1% over last Monday’s close.

After declining in July, housing starts recovered on the month – rising 3.9% and outstripping the 1.9% gain the analyst consensus was expecting. Smoothing out some of the near-term volatility, the six-month moving average of housing starts now stands at 1.61 million units (annualized), well above the pre-pandemic high of 1.45 million units (Chart 1). The strong reading was entirely supported by strength in the multifamily segment, which was up over 20% month-on-month. Single family starts pulled back modestly on the month, though remain at a very healthy level of 1.08 million – slightly above their pre-pandemic level of 1.06 million units. With permitting also up in August, it appears that residential construction will continue to be a net positive for economic growth over the coming months. 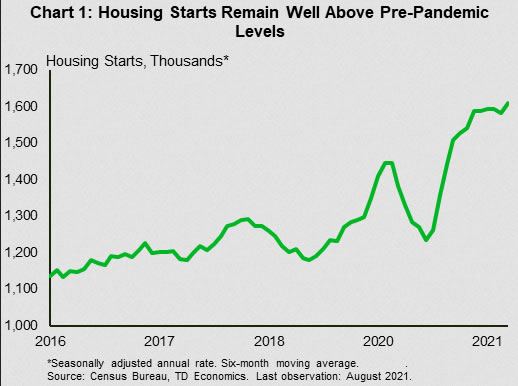 On the demand side of the equation, a small contraction in existing home sales (-2.0%) fell right in line with consensus expectations. After the frenzy in the market between the summer of 2020 and early 2021 some give-back in sales was expected. The ongoing reversion to pre-pandemic trends reflects a return to a more sustainable pace of activity (Chart 2). In fact, the 5.88 million (annualized) sales in August were still 8.5% higher than in the same month in 2019. Over two years that amounts to an average growth rate of roughly 4.2%, still well above trend. 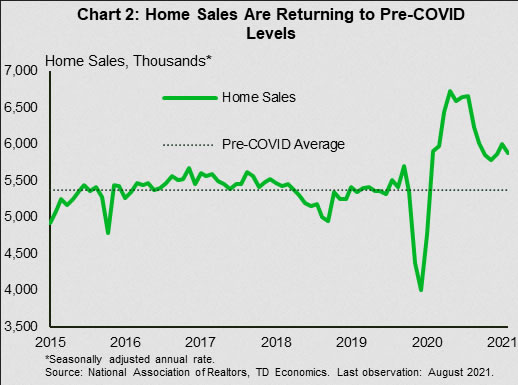 In the accompanying projections, FOMC members shaved their growth forecast for 2021 (now expecting 5.9% for the year, from 7.0% in June), but lifted it for 2022 and 2023. Risks to the inflation forecast continue to be described as “transitory” with PCE inflation expected to moderate from 4.2% this year to 2.2% in 2022. A more stable inflation path and the steady return to full employment have officials now projecting rate hikes to commence in 2022, with three more coming in 2023.

Altogether, we’ve received a reassuring message of an economy on the mend. There are certainly risks to the outlook – the standoff over the debt ceiling (discussed in the financial section below) being top of mind – but the broader picture is one of healthy domestic demand and gradually receding supply side stresses. The pandemic isn’t over yet, but the light at the end of the tunnel is getting brighter.

This week was all about the Federal election. On Monday, Canadians took to the polls to elect the 44th Parliament. The Liberal party once again came out on top, winning 159 seats (projected), an increase of two since the 2019 election (Table 1). This once again secured the party a minority government. As for the others, the Conservatives won 119 seats, two fewer than the 2019 result, the NDP went up one to 25 seats, and the Bloc Quebecois won 34 seats, a loss of two from two years ago. So, on the whole, the pandemic election didn’t bring a massive shift in Canada’s political landscape.

That said, the election did offer a chance for parties to lay out their fiscal plans for Canada. The Liberal platform envisioned around $80 billion in net new spending over the next five years with special focus on improving housing affordability, extending COVID-19 supports, and boosting funding for health care. The platform also proposed introducing new taxes that would increase revenues by $25.5 billion over the same time frame. If enacted exactly as planned, new fiscal outlays could increase GDP growth by 0.2 to 0.5 percentage points (ppts) in 2022, and by 0.1 to 0.2 ppts in 2023, while presenting a small drag in 2024 as spending weakens.

The additional expenditure would also lead to wider national deficits compared to the Parliamentary Budget Office’s baseline forecast (Chart 1). As a result, the debt burden, measured using the debt-to-GDP ratio, would also be higher, and the discrepancy would grow every year. By 2025-26, the Liberal platform’s debt-to-GDP ratio is 2.3 percentage points (ppts) higher than the PBO estimate. 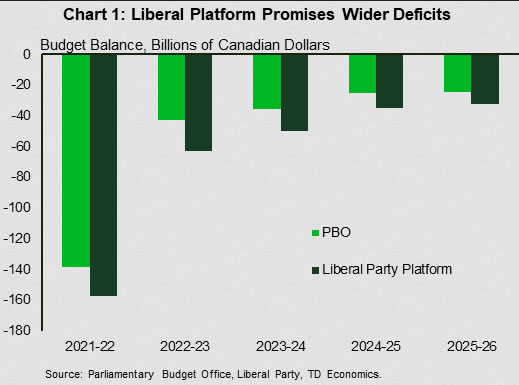 Notably, other major parties had drawn up fiscal plans that would also lead to larger deficits over the next several years. Like the Liberals, the NDP and Conservatives proposed significant spending measures on housing, health care, and pandemic supports. It may not be all that difficult for the minority government to secure support to push through legislation on these issues in the near future.

Extending COVID-19 programs is likely to be the most pressing matter for the new federal government. Cases have risen across the country and some provinces (Alberta, Saskatchewan) are in the midst of a brutal fourth wave. The Liberal government had prioritized prolonging the Canada Recovery Hiring Program, which subsidizes staffing costs for businesses. But they may also need to consider renewing income support programs, like the Canada Recovery Benefit, which is expiring at the end of October, especially if the pandemic resurges as we enter a cooler fall season.

The Bank of Canada will be watching pandemic and fiscal developments closely. As in our updated Quarterly Economic Forecast, the Bank does not expect the fourth wave to derail the economic recovery. High vaccination take-up and other mitigating efforts, like vaccine passports, should be enough to lessen the impact of the Delta variant and avoid strict lockdown measures. Moreover, to the extent that growth slows this year, it should be made up with stronger growth next year. Given additional fiscal stimulus, this should keep the economy well on track to absorb excess slack by the second half of 2022.

President Biden continues to push his legislative agenda, which centers around two major proposals: a plan to spend $3.5 trillion on education, health, childcare, and to combat climate change and $1 trillion on the nation’s aging infrastructure. Given the current state of bipartisan politics, getting agreement on these plans is no easy task and is sparking a lot of debate. In the meantime, the White House faces a pressing September 30th deadline to renew the government’s spending power. If Congress does not act, the government will be forced to shut down.

At the same time, Congress must lift the ever-precarious debt ceiling. Recall that the debt ceiling was reinstated on August 1st after a COVID-induced pause. The limit imposed by legislation means that the U.S. Treasury is not currently permitted to issue debt to pay its bills and has been running down its cash assets to make ends meet (Chart 1). It’s estimated that around mid-to late-October, it will run out of cash for all needed payments. Last week, Treasury Secretary, Janet Yellen, warned that if swift resolution didn’t occur, this impasse could turn into a financial market stress. 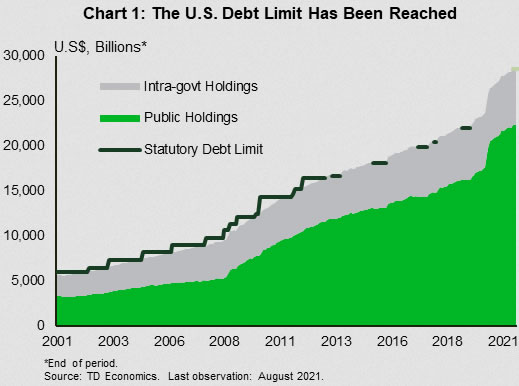 But You Already Promised!

The U.S. government has committed to spending a lot of money over fiscal 2022. But, for the government to continue its deficit spending, Congress needs to renew its spending authority. Logically we expect the government to pay its bills, but this isn’t the first time it’s dangled against the precipice.

The most recent incident happened in late-2018/early-2019 during the Trump presidency. The historic 35-day shutdown over the funding of the U.S.-Mexico border wall resulted in about $11 billion in lost output, with a disproportionate impact on government workers. Though it was impactful on those who were furloughed (or ended up temporarily working for free during that time), the overall impact on the economy was small (0.1% on GDP). And that has also been the case in prior episodes. However, the tension in getting a deal done so the government can keep working can keep markets on edge, at a time when global events are already causing angst. Then there’s the debt ceiling issue, that poses much more economic and financial risk.

As American as Baseball and Apple Pie

The debate over the debt ceiling is a unique American past-time. This cap on the amount of government debt was established during World War I so that the U.S. Treasury could issue bonds and bills without the approval of Congress (particularly important given large/uncertain wartime spending). Though the spirit of the law was to make debt issuance easier, the ceiling has evolved to act as a blunt tool for political fiscal restraint.

As the size of the American economy expands, the capacity for the government to take on new debt increases as well. This means that the debt ceiling needs to be raised at regular intervals. And indeed, it has – nearly 80 times since 1960. However, the debt ceiling debate has become more acrimonious and brinkmanship more common over the past several decades. Congress has, on several occasions waited until the very last minute to increase or suspend the limit. The most infamous incident occurred during the Obama presidency in 2011. While a deal was struck days before default would have occurred, the uncertainty caused by the quarrel spurred Standard & Poor’s to downgrade the credit rating on U.S. sovereign debt. The stock market dropped around 12% in its wake (Chart 2). 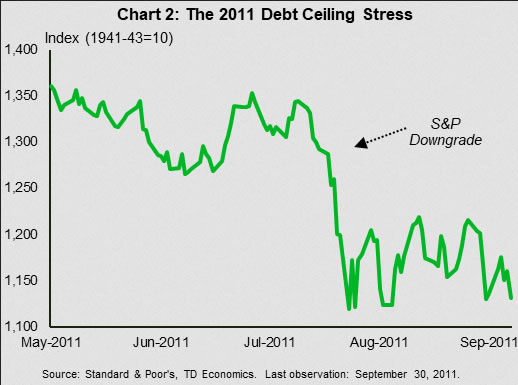 The news out of Washington will be closely watched over the coming days and weeks. Although financial markets have become more accustomed to legislative battles, the chance of this turning into a tail-risk rises by the day. From our perspective, the odds of a government shutdown will be high as the September 30th deadline approaches, though it should have a minimal impact on our economic outlook if history holds true.

On the other hand, if the debt ceiling battle extends and causes investors to get panicky about the government’s ability to meet its debt payments, this would pose a bigger risk to markets. The worst-case scenario would be a missed Treasury payment, which would almost certainly result in a significant decline in equity prices, a large jump higher in yields, and a depreciation of the USD. Although the government would go to all lengths to avoid a missed Treasury payment, it only takes one misstep to set a new precedent. Our base assumption is that this unthinkable mistake will be avoided, but we will be intently watching negotiations as the clock ticks down.