That start of the new week has been a positive one for risk assets with Chinese equities rallying overnight and European indices jumping the gate at the open. However, by mid-morning, some of the European indices has come sharply off their earlier highs, while US futures had turned mixed. Nasdaq futures fell as rising bond yields weighed on appetite for growth stocks, with which the tech-heavy index is blessed with. Meanwhile, investors were also wary of surging oil and energy prices, while Evergrande uncertainty continued to linger. So, after a volatile last week, it looked like investors were bracing themselves for even more fireworks as we look forward to the start of the US session and the rest of the new week.

Right now, it is all about government bond yields driving the FX markets. Yields are rising sharply, reflecting investors’ expectations about monetary tightening amid surging inflationary pressures. Today saw Brent oil prices broke to a new yearly high, almost having reached $80 per barrel. Other energy prices have also skyrocketed recently with electricity and gas both increasing so much that some factories such as those making fertilisers having to halt production. The long and short of it is that inflation is rising, and markets are responding as they expect central banks to tighten their belts. This is why I think stock markets are very risky at these levels and a correction might be on the way.

The US 10-year has broken out again: 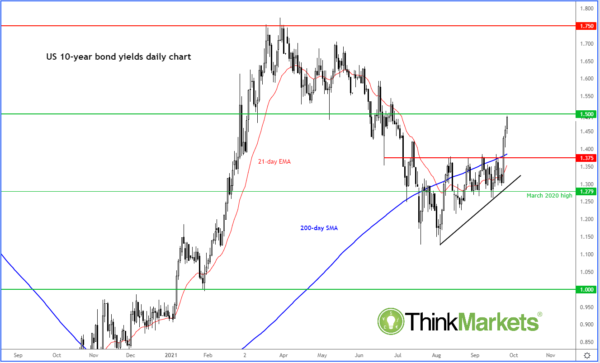 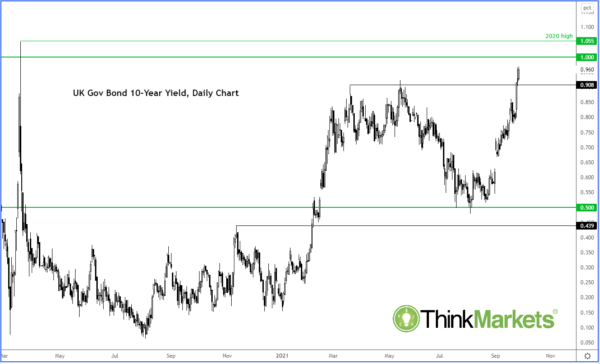 If yields climb higher, this could weigh especially on the overstretched growth stocks in the technology sector, which have low dividend yields. Investors might prefer the relative safety of government debt and fixed coupon payments than buying severely overvalued stocks, just as the Fed starts to reduce the pace of its asset purchases. Indeed, the Nasdaq 100 has started to turn lower again, finding resistance from the backside of the broken trend line and former support area around the 15300 to 15400 area: 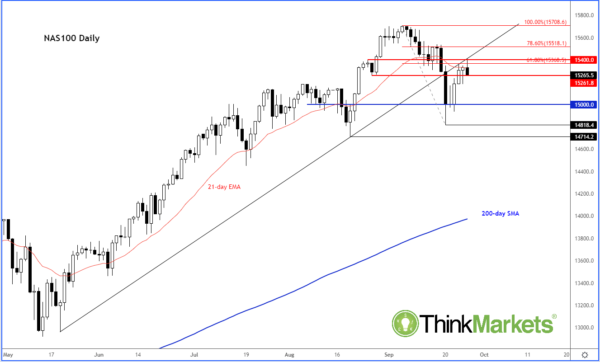 The first half of the previous week was dominated by the fallout from Evergrande, the debt-laden Chinese property developer, as investors fretted over contagion risks. But the company agreed to settle interest payments on a domestic bond in mid-week, while the People’s Bank of China injected cash into the banking system. This helped to soothe fears over imminent contagion from the troubled Chinese developer – and the global stock markets recovered as a result towards the end of last and start of this week. However, the company’s foreign bondholders did not receive $83.5 million interest payment that was due on Thursday. There is a 30-day grace period before a hard default is triggered, so there might still be time to avoid that. It looks like China’s government has taken over the company to ensure funds are used to complete housing projects first, before paying creditors. But the situation remains uncertain and needs to be monitored closely as it could move the markets again in the weeks ahead. For now, we are in the 30-day grace period, but it is difficult to see any lights at the end of the tunnel for Evergrande.

There were plenty of central bank meetings last week, and the overall message was that the global economy is continuing to recover and that we are getting closer to the start of policy normalization. That’s at least what the Federal Reserve implied, with the Bank of England also turning more hawkish amid the inflation upsurge. Other central banks such as the BoJ and SNB continued to re-iterate that their policies won’t be changing anytime soon. As a result, we have seen the yield differential between hawkish central banks widen compared to the dovish ones.

In the week ahead, there will be plenty of central bank speeches to look forward to – starting with ECB President Christine Lagarde (see the calendar below). Will yields rise further? Are they going to cause further volatility? I think that growth stocks in particular look vulnerable (see above).