With the debt ceiling lifted and the U.S. government able to fund itself through December, attention gravitated back to economic data this week. Inflation continued to take center stage for much of the week, but the strong showing in the September retail sales report out Friday morning (+0.7% on the month) was a welcome surprise. The report suggests that consumer demand is proving resilient to the latest infection wave and the winding down of more generous pandemic unemployment benefits.

The September consumer price index (CPI) report showed that the monthly pace of price increases has cooled from the hot pace recorded earlier this year, but that inflation remained well above the Fed’s comfort zone (Chart 1). Overall inflation rose 0.4% on the month, a touch higher than August, and was up 5.4% year-on-year (y/y). Food and energy were major contributors to the headline gain. Removing these two components, core inflation was up a more modest 0.2% on the month (+4.0% y/y). 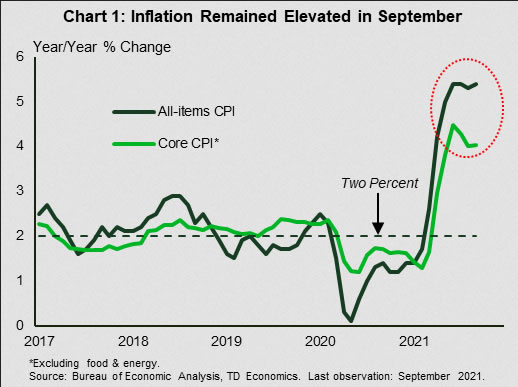 Underneath the surface, the pandemic continued to drive big price swings in both directions. Travel-related prices that were hot in the spring are now trending down, with airline fares falling 6.4% on the month. Price pressures picked up in other areas, however, such as new vehicles, household furnishing and shelter. The latter, a heavily weighed inflation category, rose 0.4% m/m, with rents up 0.5% (the largest monthly increase in over two decades) and owners’ equivalent rent up 0.4% (the largest increase in over five years).

Other indicators corroborate the elevated inflation narrative. NFIB data, for instance, showed that small businesses continued to face difficulty in filling job openings in September – a record 51% of firms had open positions. Businesses are boosting compensation in order to attract and retain talent, and in turn are passing down some of the added costs to consumers (Chart 2). Close to half of all small businesses, 46%, are raising and plan to raise prices further – the highest levels since the 1970s. 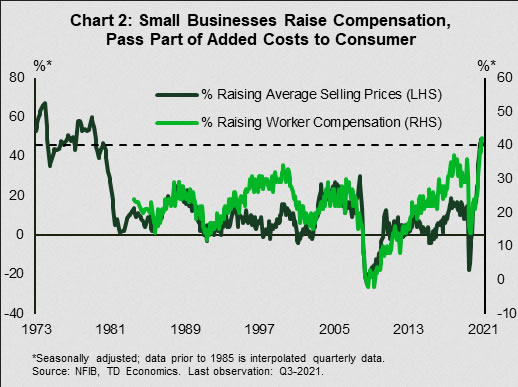 The challenging employment backdrop is not unique to small businesses. The JOLTS survey shows that American workers quit their jobs in record numbers (4.3 million) at the end of summer. This trend is especially prevalent in the accommodation and food services industry, where a 6.8% quit rate towers over an already-elevated 2.9% total quit rate, itself the highest in two decades. An elevated quit rate is a sign of growing confidence among workers and supportive of continued solid wage growth.

Constraints on the employment front, together with supply chain disruptions, raise the possibility that ‘transitory’ inflation will last longer than initially anticipated. The Fed has recognized this and is gearing up to remove monetary support. This week’s FOMC minutes, which showed committee members marking up their inflation forecasts, reaffirm this view. The Federal Reserve is likely to announce its plan to taper asset purchases at its next meeting and end the program completely by mid next year. The first hike in the federal funds rate is likely to follow in the second half of 2022.

It’s hard not to be upbeat on the Canadian economy right now. The latest string of data releases has been outright encouraging, pointing to a solid bounce back in economic activity in the third quarter. For example, manufacturing data released this week had sales picking up by 0.6% in August, as 17 of 21 industries saw an improvement in production. On the consumption side, households continued to ramp up spending through the summer and into early fall. High-frequency credit and debit card data indicate that Canadians have been unleashing pent-up demand for restaurant dining, travel, and other services that had long been restricted to them due to public health protocols. There was also a burst in hiring activity, as 340k jobs were added through the third quarter, returning employment to its pre-pandemic (February 2020) level (Chart 1). 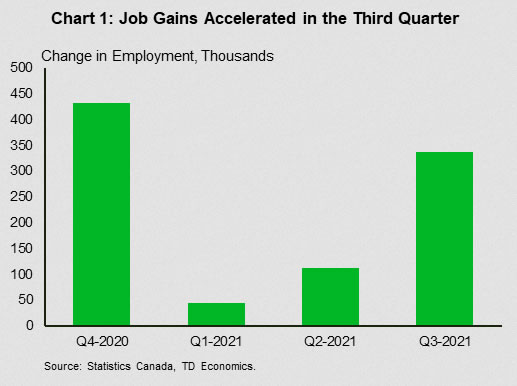 These advances were only possible because Canada has (so far) kept the Delta variant at bay in most parts of the country. While daily cases rose in August, they appear to have peaked in mid-September, and have been trending down over the past few weeks (Chart 2). The country has dealt with the fourth wave far better than it has with prior waves, reflecting the measured approach most provinces have taken in lifting public health restrictions as well as the impressive vaccine take up among Canadians. 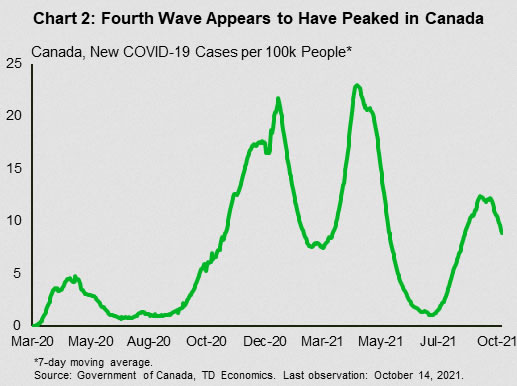 With the spread seemingly under control, the Ontario government is getting set to remove capacity limits on a number of businesses including restaurants, bars, and gyms. News outlets report that an official announcement is coming next week. In other good news, U.S. officials said that the land border will reopen to fully vaccinated Canadians on November 8th.

Fewer restrictions should provide a boost to the economy in the fourth quarter. But it could also further exacerbate inflationary pressures that have been sparked by a number of factors including reopening of economies, supply chain disruptions, and recent energy crunches. On supply chain issues, Canada is not facing the same constraints as the U.S. Ports have not been overwhelmed as they have south of the border. Still, given the tight relationship with the U.S. and the interconnected nature of supply chains, Canada is likely to feel the pinch. September consumer price inflation data released next week could reflect some of this shock. Inflation reached 4.1% in August, and likely moved higher last month.

Supply disruptions may not only show up in higher prices, they could also act as a handbrake on the economic recovery. If firms cannot source inputs or retailers’ inventory are depleted, GDP growth could weaken.

Concerns are likely rising for the Bank of Canada. Supply problems have presented a formidable challenge, increasing the risk of a policy error that could have steep consequences for the Canadian economy.