Inflation remained top of mind this week as analysts debated its persistent nature. September’s reading on industrial production, which posted a surprise drop of 1.3% month-on-month, offered little comfort as input shortages were evident throughout the report. While the drop in the materials sub-index was mostly attributed to temporary outages related to Hurricane Ida, the production of consumer goods suffered from continued supply-side disruptions, pushing the durables component to -3.7% month-on-month.

Housing market data also signaled strong price pressures. Despite a near all-time-high level of homebuilder confidence, housing starts edged lower in September, largely reflecting homebuilders’ continued struggle with supply bottlenecks and elevated commodity prices. Meanwhile, existing home sales surprised on the upside with a higher-than-expected monthly reading of 7.0%, suggesting that demand remains strong, especially in the single-family market (Chart 1). The increase might be a one-off, triggered by buyers pulling forward their purchases to take advantage of low (but climbing) mortgage rates. Still, should housing demand maintain its recent strength and supply fail to keep up, home price growth is unlikely to slow very much. Median home price growth remained firmly in double-digit territory relative to year ago levels in September. 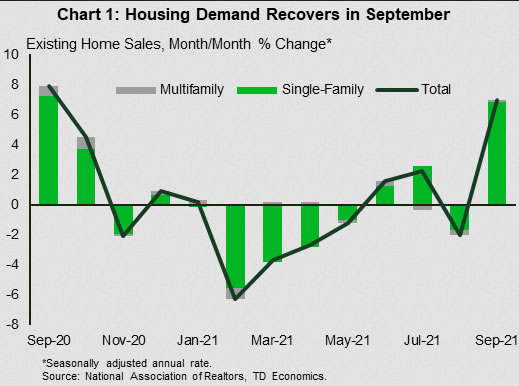 While rising home prices are not fully reflected in the shelter-cost component of consumer inflation measures (which estimate the cost of housing services and not the price of the asset itself), a persistent increase in housing demand unmet by new supply will push shelter inflation higher. A further acceleration in rental price growth may be the proverbial straw that convinces the Fed to begin its hiking cycle. In a speech this week, Fed Governor Waller noted that he is “closely watching prices for housing services” and that, should monthly inflation continue to push higher, “a more aggressive policy response than just tapering may well be warranted in 2022”.

After months of relative complacency, the bond market is no longer holding back expressing its concerns about more persistent inflation pressures. With the Fed’s tapering schedule now priced in (see Dollars and Sense), this week’s steepening of the yield curve reflects a reassessment of the policy path, with the first rate hike pulled forward to September of 2022 (Chart 2). 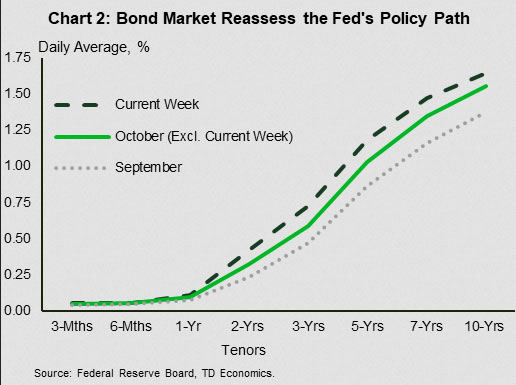 While the bond market is concerned with inflation, the equity market keeps on whistling. This week, investors concentrated their attention on strong corporate earnings, which indicated that American companies were able to avoid an erosion of profit margins by passing at least a portion of price increases onto consumers.

This may be good news for equity investors but increasing consumer tolerance for price increases may itself prove more permanent. In the extreme, this could trigger a wage-price spiral where workers demand higher wages to make up for the loss of purchasing power. While there is little evidence of it yet, the mere possibility of an intrenched inflationary mindset will not go unnoticed by a central bank still dedicated to low and stable price growth.

There was a lot to unpack in this week’s data flow, and much of it had to do with everyone’s favorite topic these days: inflation. First were the movements in financial markets, which continue to revolve around the theme. Commodity prices took another leg up, boosted by supply disruptions. Meanwhile, bond yields continued to tick up across the board, as ongoing inflation concerns bring forward market pricing for future policy rates.

Turning to data releases, the Bank of Canada’s business and consumer surveys for the third quarter kicked off the release schedule. Starting with the positives, both surveys showed broad-based resilience in demand expectations, which bodes well for economic growth. For instance, the main composite indictor in the Business Outlook Survey rose to 4.73. This builds upon already-decent improvement in the preceding quarter. The Canadian Survey of Consumer Expectations pointed to a moderation in spending growth, but to still solid levels.

Notwithstanding this optimism, what stole the spotlight were the accompanying survey-based measures of inflation, which increased again. To this end, supply chain concerns came to the forefront for businesses. Difficulties in sourcing inputs and labour shortages increased relative to last quarter. Firms also anticipate these constraints will last longer (second half of 2022). The silver lining is that firms are anticipating higher capital spending and hiring (Chart 1). The flip side is that supply constraints were also cited as impacting output. 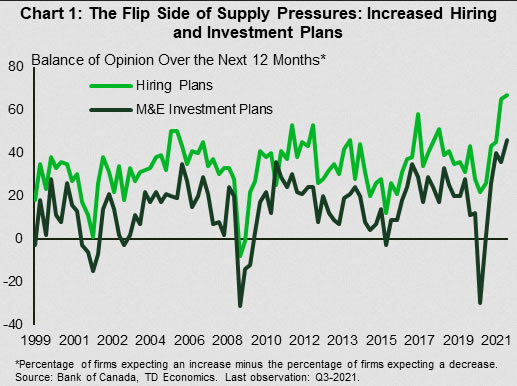 On the topic of inflation, this week’s calendar also showed a 4.4% year-on-year increase in the Consumer Price Index. Energy continued to feature prominently, but food prices are becoming a bigger part of the picture. Rising inflation is a legitimate economic concern, especially as price pressures become more broad-based, but we must place the current situation in context. First, this is not stagflation – a situation in which rising inflation accompanies worsening economic outcomes. There is no evidence for this in Canada, where the labour market and demand backdrop remain resilient. Second, long-term measures of inflation are still relatively well-anchored, as evidenced in this week’s business and consumer surveys. Finally, the Bank of Canada has been flexible in responding to changing economic outcomes and was among the earliest to signal its tightening shift earlier this year.

On that note, the persistence in inflation will be something to watch for in the Bank of Canada’s announcement next week. Market-based measures have shown a notable repricing of interest rate hikes on rising inflation concerns, with the OIS curve now pricing in three interest rate hikes by the summer of 2022. We do not expect the central bank to move this quickly, but the Bank’s statement is likely to flag upside risks, balanced against the progress that has been made to date on closing the output gap and returning the economy to full employment. 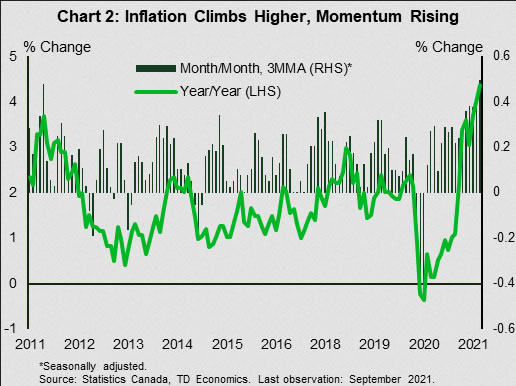 Special Feature – Remote Work Will Wane, but Will Continue to Play a Heavier Role than It Did Pre-pandemic

Chances are that if you use a computer for work, you have had to work remotely at some point during the last nineteen months. The shift to remote work in the U.S. and Canada had been gaining ground steadily in the years leading up to the pandemic. But the health crisis helped expedite the trend in a major way, as it forced millions of workers across North America to work remotely. As this happened, plenty of office space sat empty, while vacancy rates surged higher. Against this backdrop, builders, for their part, have eased off the accelerator – a trend that’s expected to continue for some time and one that will avoid overburdening the commercial real estate (CRE) office market as it recovers from the pandemic’s hit.

With large swathes of the North American population having already been vaccinated, the worst of the health crisis may be over. Indeed, more workers have returned to the office, even as the latest Delta-driven infection wave slowed down the rate of progress in early autumn. As of September, roughly 13% of U.S. workers were still operating from home because of the pandemic, down from a peak of around 35% earlier last year (Chart 1). This measure does not factor in those working remotely for reasons other than the pandemic (estimated at close to 6% before the health crisis), leading to some undercounting. 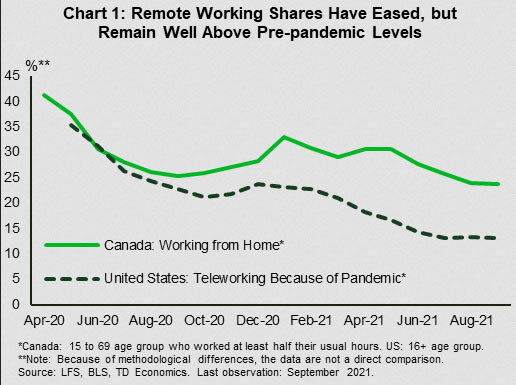 In Canada, where governments and businesses are proceeding with greater caution, 24% of employees continue to work remotely, compared to about 40% at the high-point last year and a pre-virus level of roughly 5%. Note that due to methodological differences, these data series are not a perfect apples to apples comparison. Still, the main point to highlight is that even as remote work shares have declined, they remain well above the pre-pandemic levels in both countries. As the pandemic wanes and firms resume the return-to-office plans that were put on hold as a result of the Delta wave, the remote work shares are expected to ease further in both.

Companies and employees are still in the process of figuring out what the future of work will look like over the long term. Recently announced company-specific decisions and survey data point to a fragmented picture. Consider that while client-facing businesses may be eager to get employees back to the office, companies like LinkedIn, Twitter and Amazon will give many of their workers the option to work remotely full-time. Then there’s the hybrid approach, where companies allow workers to split time between in-person and remote work. This latter strategy, which may allow for greater flexibility, appears to be relatively popular, garnering the support of 50-75% of employees (depending on the survey).

Whatever the individual path, one thing is for sure: remote work will take on a permanently higher share than it did pre-pandemic, even as the traditional office recaptures some activity. Ultimately, this will mean lower demand for office space over the long-term. But the need to reduce worker density in a post-pandemic world, which can be achieved by increasing space per employee, could provide some important offset. In the meantime, besides greater elbow room, look for work offices to also become more welcoming as they compete with the conveniences of the remote office.