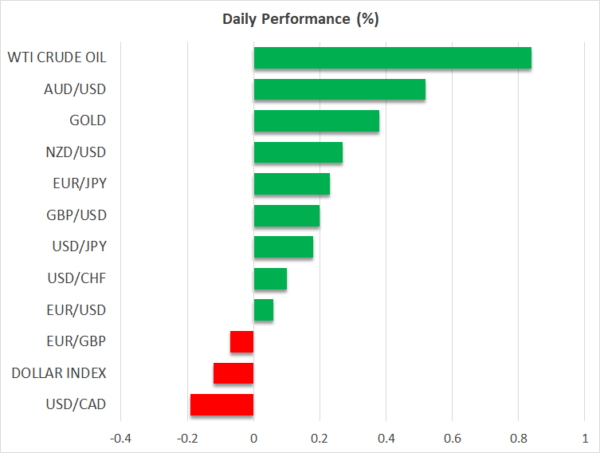 The overarching market theme continues to be how persistent this inflation episode will be and whether central banks will go into battle to suppress it. Hopes that price pressures will fade by themselves have all but vanished as the energy crisis burst into the spotlight, propelling inflation expectations higher.

With investors anticipating higher inflation for longer, the timing of rate increases has been brought forward across the world. The risk is that central banks might step on the brakes too hard, normalizing just as economies are slowing to fight an inflation ghost that might not exist in a couple of years as supply chains finally correct and more energy production comes back online.

Therefore, it is quite surreal to see stock markets trading just a sliver away from their record highs even as oil prices and inflation expectations keep marching higher. This resilience might reflect the cheerful earnings season so far, complemented by investors pricing out the risk of corporate tax increases in America after the Democrats shelved those plans to reach a deal on social spending.

Still, the macroeconomic environment looks fragile. Rising yields, a slowdown in China as the property sector cleans up its balance sheet, consumers getting squeezed by higher energy bills, and no imminent relief for paralyzed supply chains seems like a recipe for greater volatility from record heights.

Over in the FX stadium, the British pound is all the rage as investors grapple with the prospect of a Bank of England rate increase next month to tame rising inflation expectations. However, that also risks choking the economic recovery by prematurely cooling demand.

Ergo, the outlook for sterling seems rather risky here. Market pricing around the Bank of England is already super-aggressive, with four rate increases priced in by the end of next year. This allows plenty of scope for disappointment moving forward, especially since the latest PMIs imply the UK might struggle to maintain its current momentum.

Meanwhile, the dollar has been on the back foot recently, which likely boils down to the joyful mood in equity markets eroding demand for defensive plays. This allowed euro/dollar to push higher but the latest round of PMIs suggests the risks remain tilted to the downside, as the energy shock continues to torment the Eurozone much more.

The Turkish lira has been blown to smithereens by the latest moves from President Erdogan, who essentially strong-armed the central bank into cutting rates despite an inflationary supernova and then expelled the ambassadors of many Western nations. With an escalating diplomatic crisis and the central bank unable to control soaring inflation, there isn’t much that can rescue the lira from its doom-loop, outside of capital controls.

The economic calendar is low-key today but the rest of the week promises to be quite explosive, with central bank meetings in the Eurozone, Canada, and Japan alongside earnings results from the tech heavyweights. Facebook will get the ball rolling today after Wall Street’s closing bell.

Among the central banks, the Bank of Canada could be the most exciting. The Canadian economy is absolutely roaring, enjoying the rally in oil prices and strong fundamentals. Employment is back to pre-crisis levels, which suggests wage growth could fire up soon to keep inflation dynamics rolling.

Finally, oil prices have gone ballistic, hitting new seven-year highs after the Saudi Arabian energy minister suggested that OPEC might not ride to the market’s rescue by raising production. His comments could keep the relentless rally going as traders position for next week’s crucial OPEC+ meeting.