The Canadian jobs recovery is expected to continue in October, with a 50k increase expected to build on the 157k jump in September. The number of workers receiving regular employment insurance payments has fallen sharply, by about 600k by our count since the September survey reference period as recipients began rolling off extended pandemic related support programs. Strong demand for workers as indicated by widely reported labour shortages and the high level of job postings means that part of that shift will have been from unemployment to job growth in October. The spread of the delta variant was also easing in October in much of Canada, and our own tracking of consumer spending showed a pickup in purchases of high-contact services where the shortfall in jobs relative to pre-pandemic levels remains very large – and it is those sectors, for example accommodation and food services, where we expect to see larger employment growth.

Another increase would take employment further above pre-pandemic levels and extend the outperformance of labour market data relative to economic output (GDP) in recent months. Hours worked increased almost 7% at an annualized rate in the third quarter, well-above preliminary estimates that output rose closer to 2%. Indeed, compared to GDP (where output was running 1.4% below pre-pandemic levels as of September) labour markets are looking increasingly tight. The Bank of Canada was clearly looking through those softer GDP reports in a hawkish shift in their communications this week, and likely will continue to do so as long as labour market data continues to outperform. 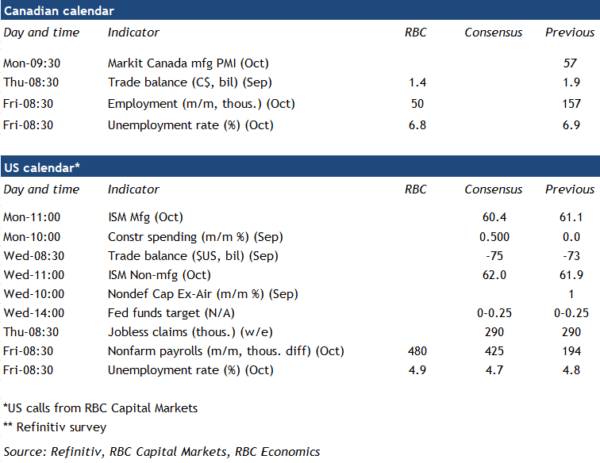