All Eyes On The FOMC

In the American session today, we highlight the release of the Fed’s interest rate decision. The bank is widely expected to remain on hold at the range of 0.0%-0.25% and the market is preparing to see whether it’s going to announce the tapering of its QE program and at what pace, which currently is at the level of US$120 billion per month. In a recent statement last week, the last by any Fed Policymaker before November’s meeting, Fed Chairman Powell implied that it would be time for the bank to start tapering its QE program, yet raising rates is still a long way off, which tended to weaken the USD. It should be noted that the bank is under pressure to start tightening its monetary policy in order to tame inflationary pressures within the US economy, yet at the same time could undermine the recovery of the US economy, which seems to be slowing. Should the bank actually announce the start of the tapering of its QE program and the reduction of asset purchases being performed at a fast pace we may see the USD gaining at the tightening of the bank’s monetary policy and vice versa. On a second note, we would like to mention that the time for US President Biden to choose the next Chair of the Fed is nearing and may partially be clouding the monetary policy outlook for the bank. Volatility could be very high at the time of the release and could be extended during Fed Chairman Powell’s press conference later on and the USD’s price action could turn to either direction depending on the announcement.

The USD index rose yesterday testing the 94.10 (R1) resistance line. We expect USD’s direction to be influenced by the Fed’s interest rate decision, which could lead it to an alteration of its current sideways movement. Should the bears take over, we may see the USD Index aiming if not breaking the 93.70 (S1) support line, thus paving the way for the 93.20 (S2) level. Should the bulls take over we may see the index breaking the 94.10 (R1) resistance line and aim for the 94.60 (R2) level.

AUD remained soft yesterday against the USD as RBA’s dovishness as displayed in yesterday’s monetary policy decision seemed to continue to weigh on the Australian currency. Fundamentally the tensions in the French-Australian relationships made headlines, yet that seemed not to worry the markets. It should be noted that Aussie traders during tomorrow’s Asian session are to have a busy day as we note the release of September’s trade data as well as the retail trade growth rate for Q3. On the other hand, the Kiwi got some support against the USD during today’s Asian session as Q3’s employment data were quite solid with the unemployment rate dropping beyond expectations and job growth rate accelerating instead of slowing down. It should be noted that RBNZ Governor Adrian Orr is reported to have stated earlier today that global inflationary pressures could lead to higher interest rates, which could underscore the bank’s hawkish profile and support NZD.

AUD/USD seems to have halted its downward motion at the 0.7420 (S1) support line. We tend to maintain a bearish outlook for the pair, yet the Fed’s decision could send it to either direction. Should buyers have the upper hand we may see it reversing course and reaching if not breaching the 0.7475 (R1) line aiming for the 0.7540 (R2) level. Should the selling interest be renewed we may see the pair breaking the 0.7420 (S1) support line and aim for the 0.7365 (S2) level if not even lower. 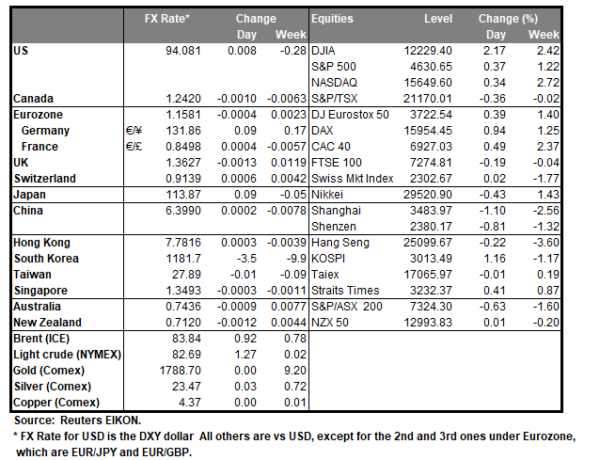 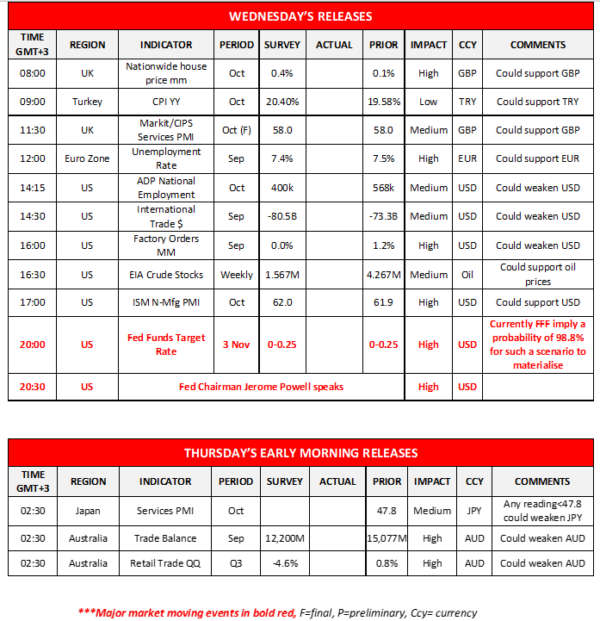