Fed’s No. 2 Hints At Faster Taper, Dollar Up But Stocks Stay Calm 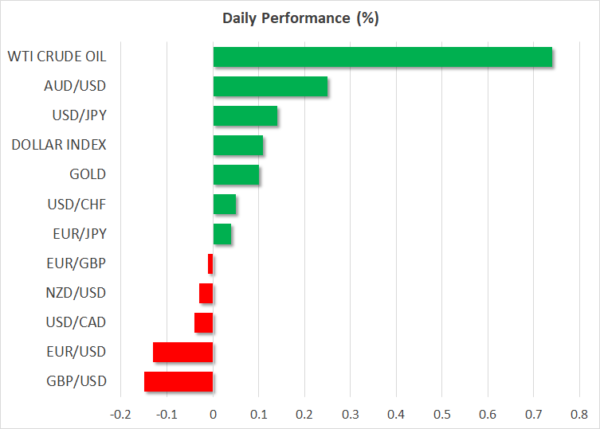 Markets in positive spirits despite Fed and virus worries

The Fed’s second in command may have just opened the door to a faster pace of tapering, but stocks nevertheless edged higher at the start of the week as there appeared to be little fallout in bond markets. Vice Chair Richard Clarida became the most prominent Fed official on Friday to suggest that policymakers could discuss a quicker exit from QE at the December meeting. It follows similar remarks from Governor Christopher Waller minutes before Clarida spoke and from James Bullard last Tuesday.

However, markets don’t seem spooked by the prospect of accelerated tapering. The recent upturn in economic indicators in the United States, not to mention the exceptional earnings season, might be cushioning the blow. But it’s also possible that investors are betting on President Biden appointing Lael Brainard as the next Fed Chair, which would strengthen the dovish camp at the US central bank.

Biden is due to announce his choice – widely believed to be a two-horse race between incumbent Jerome Powell and Governor Brainard – very soon, likely when he speaks on the economy on Tuesday.

More clues about faster tapering could come on Wednesday when the minutes of the November FOMC meeting are due.

Ahead of that, US stock futures were moving into record territory except for the Dow Jones, despite climbing the most at the European open. It follows a mixed session on Friday when only the Nasdaq Composite and Nasdaq 100 managed to finish higher. European and Asian indices were down too on Friday but have swung into the green today.

Hong Kong’s Hang Seng index and the S&P/ASX 200 index in Sydney were the exceptions. China concerns weighed on the Hang Seng, while Europe’s Covid-19 resurgence dampened the mood in Australia.

On the other hand, expectations of a prolonged period of easy monetary policy shored up risk assets in Europe even as storm clouds gathered over the continent. Tighter Covid restrictions triggered a wave of violent protests in several European cities over the weekend as Austria entered a full nationwide lockdown today.

ECB chief, Christine Lagarde, is keeping the equity bulls happy by reinforcing her objection to premature tightening. But this has come at the expense of the euro, which plunged to a more than 16-month low of $1.1248 on Friday. With the coming winter season potentially being marred yet again by strict Covid curbs, the near-to-medium term outlook for the euro isn’t that great to say the least.

Sterling is being dogged by similar concerns even though the Bank of England continues to talk up rate hike expectations. Governor Andrew Bailey was on the offensive again over the weekend, warning that rates will need to be raised. However, with his credibility damaged recently, it’s a case of ‘seeing is believing’ as far as markets are concerned. So unless there is a rate hike in December, it’s hard to see the pound reclaiming the $1.35 level in the short term.

One central bank that is almost certain to hike rates soon is the Reserve Bank of New Zealand. The Bank is widely expected to hike rates on Wednesday, though the New Zealand dollar barely held on to the $0.70 amid the stronger greenback. The aussie outperformed its peers, however, on Monday, rising by 0.3% as it was lifted by higher metal prices.

The Canadian dollar was slightly firmer too even though oil prices rebounded only modestly from last week’s selloff. Japan was the latest country to indicate it might take part in a US request to release some of its strategic oil reserves to ease the energy crisis. Markets are still trying to decipher how significant this limited supply boost would be should the US and its partners go ahead with a coordinated move to unleash oil from their emergency reserves.

In the meantime, WTI futures were last up about 0.5% after finding support around $75/barrel.

Gold bucked the trend among commodities, struggling around $1,845/oz as the US dollar inched towards fresh highs against a basket of currencies. Other safe-havens like the Japanese yen were weaker too, drawing little support from growing fears of a possible Russian invasion of Ukraine.

For the rest of the week, flash PMI data out of Europe on Tuesday could set the tone ahead of the US Thanksgiving holiday on Thursday when trading volumes are expected to wind down. Although there could be some drama coming out of Capitol Hill as the Democrats’ Build Back Better bill, which just got approved in the House, heads to the Senate for a contentious debate that could see the size of the spending package being trimmed.