Not much is expected from the Bank of Canada when it concludes its meeting at 15:00 GMT Wednesday. The domestic economy is absolutely booming, setting the stage for several rate increases next year. However, most of that is already priced in and uncertainty around Omicron could keep policymakers sidelined for now. As such, the Canadian dollar will be driven mostly by oil prices, although eventually, it could shine as carry trades come back in fashion.

Firing on all cylinders

The Canadian economy has staged an incredible recovery. Growth has come back online, inflation is high and rising, the housing market is roaring, and consumption has been solid. The best part is that the labor market has recovered completely, with employment now standing far above its pre-crisis levels.

In light of all this, the Bank of Canada has started to take its foot off the gas. It ended its asset purchase program at the latest meeting and signaled that it could raise interest rates as early as April next year. Money markets are currently pricing in five rate hikes for 2022, which is quite realistic considering the economy’s strength. 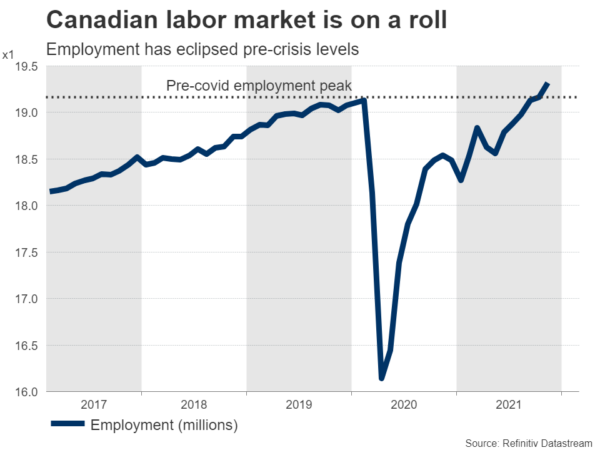 And yet the Canadian dollar has taken a beating this past month. Most of that boils down to the sharp correction in oil prices after the Omicron variant entered the equation. The 30- and 60-day rolling correlation between the loonie and oil prices currently stands at 0.9, which means the two assets have moved in the same direction 90% of the time lately. Of course, Canada is a major exporter of oil.

Turning to the upcoming meeting, the central bank is unlikely to move the needle. Incoming data since it last met have been encouraging, but at the same time, Omicron fears could keep policymakers a little cautious given the risks to global growth. 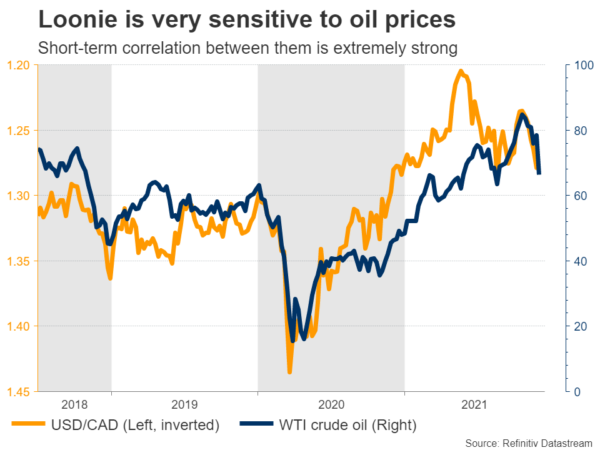 This is one of the smaller meetings without any updated economic forecasts or a press conference, so the market reaction will depend mostly on the tone of the statement. That said, any reaction could be relatively small as there isn’t much scope for drastic changes in guidance.

With the Bank of Canada’s future rate increases ‘fully priced in’, the loonie’s fortunes will likely depend mostly on how oil prices perform. In turn, that will depend on the narrative around Omicron and what OPEC does in the coming months.

For simplicity’s sake, let’s assume that oil prices remain relatively stable. In this case, the outlook for the Canadian dollar seems bright. The fundamentals of the economy are exceptionally strong, and with the central bank likely to be a global leader in raising rates during this cycle, the loonie could become an attractive destination for ‘carry trades’.

A carry trade is when an investor borrows in a low-yielding currency to invest in a higher-yielding one, and profits from the difference. Therefore, the loonie could outperform the likes of the Japanese yen and the Swiss franc once the Omicron panic settles down, as neither the Bank of Japan nor the Swiss National Bank is expected to raise rates over the coming years. The euro also falls in this category, albeit to a lesser extent.

Taking a technical look at loonie/yen, if the bulls manage to close above the restrictive 200-day moving average currently at 88.60, that could open the door for another test of 89.15. Even higher, the focus would shift towards the 89.95 region.

On the downside, should the BoC strike a cautious tone or Omicron fears intensify, preliminary support to declines could be found around 87.70. If the bears pierce below that, the next defensive barrier may be near 86.55, a zone that is more visible on the four-hour chart.