The USD remained steady against a number of its peers on Friday despite the US releasing the highest CPI rates for nearly four decades for the month of November. On the monetary front, FOMC’s interest rate decision on Wednesday seems to be standing apart from a high number of central bank interest rate decisions this week and expectations that he Fed may start tightening its monetary policy earlier may have risen. Today given the light calendar after the Japanese releases we expect fundamentals to take the lead, while TRY traders may be keeping an eye out for Turkey’s current account balance, especially after another CBT market intervention was reported on Friday. The pound seems to have stabilised against the USD amidst warnings from UK PM Johnson for a “tidal wave” of omicron infections in the UK and an intense effort to boost vaccination, while on the monetary front BoE’s interest rate decision is due out on Thursday. Oil prices seemed to remain supported as the markets viewed the possible effects of the Omicron variant as limited on Friday. Gold’s price edged higher after the release of the US inflation rates for November as the rising prices tended to increase the appeal of the shiny metal as it’s being also used as a hedge against inflation. US stockmarkets were in the greens on Friday and remained there also during today’s Asian session as S&P 500 reached new record highs despite the release of the 40-year record high inflation.

The US index continued to revolve around the 96.15 (S1) line. We tend to maintain a bias for a sideways motion currently given also that the RSI indicator below our 4-hour chart is near the reading of 50 implying a rather indecisive market yet the direction could alter either way. Should the bears take control over the index, we may see it breaking the 96.15 (S1) and take aim if not break the 95.60 (S2) support level. Should the bulls be in charge, we may see the USD Index aiming if not breaking the 96.65 (R1) resistance level.

GBP/USD edged higher on Friday taking aim of the 1.3280 (R1) resistance line. As the pair’s price action has broken the downward trendline incepted since the 29th of October we switch our bearish outlook in favour of a sideways bias. On the other hand we note that the RSI indicator below our 4-hour chart is at the reading of 50, yet with a downward inclination. Should the selling interest for cable regain momentum we may see it breaking the 1.3160 (S1) support line and aim for the 1.2990 (S2) level. On the other hand, should the pair find fresh buying orders along its path we may see cable breaking the 1.3280 (R1) resistance line and aim for the 1.3430 (R2) level. 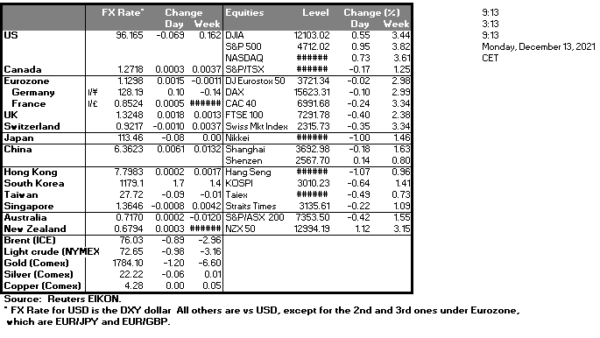