Next week’s GDP data is expected to align with the early official flash estimate that output rose 0.8% between September and October. Supply chain disruptions at least temporarily eased in the auto sector. And motor vehicle manufacturing sales rebounded following a sharp decline in September (though they were still 30% below year-ago levels). Retail and wholesale sales each increased by roughly a percent in October, according to preliminary estimates from StatCan. Outside of those indicators, oil sands extraction in Alberta was up 7% month over month by our count, adding to the list of industries seeing stronger growth.

We expect another 0.5% gain in November output, a bit lower than the 0.7% lift in total hours worked in the month. That increase would likely have been larger if it weren’t for significant disruptions caused by flooding in British Columbia during the latter half of the month, which severely impacted local transportation capacity. Our tracking of card transactions pointed to a healthy rebound in travel spending in November. But retail purchases for autos declined, offsetting some of the aforementioned strength. The ebb and flow of global supply chain disruptions will continue to impact the manufacturing sector. But the economy is also getting closer to longer-run production capacity limits, with labour in particular in short supply. That will start to weigh on growth more significantly in 2022 and beyond. We expect GDP growth to slow to 4.3% in 2022 after a 4.7% increase in 2021. 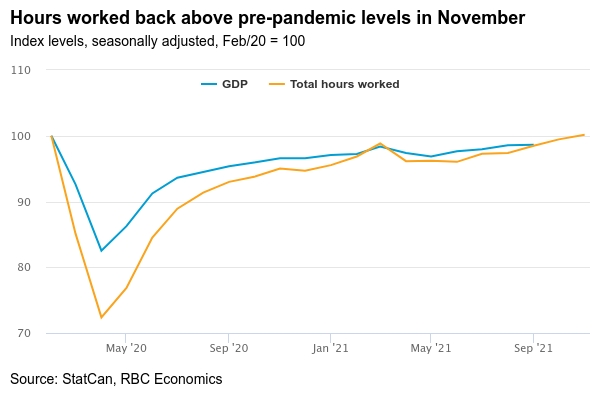 Canadian October GDP likely rose 0.8% supported by positive retail, wholesale and manufacturing sales data, all tied to a rebound in the auto sector after a particularly sluggish September. Growth is expected to have continued in November with hours worked up another 0.7%. 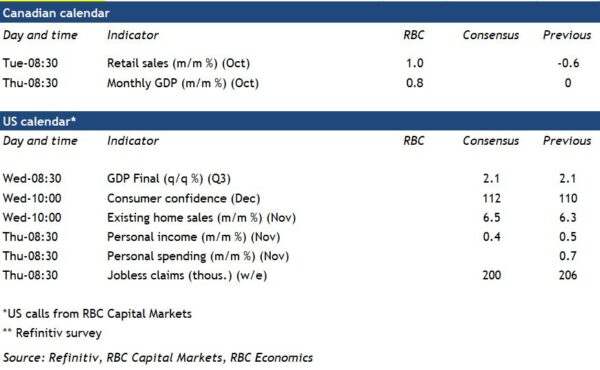