Action Forex
HomeContributorsFundamental AnalysisNew Zealand CPI: To Infinity and Beyond

New Zealand CPI: To Infinity and Beyond

Annual consumer price inflation hit a 31-year high at the end of 2021.

Consumer prices rose 1.4% in the December quarter. That took the annual inflation rate to 5.9%, up from 4.9% last quarter. That is the highest annual rate of inflation since the GST-related spike in 1990.

The December quarter increase was a little above our own forecast for a 1.2% rise and the average market forecast of 1.3%. It was also a little higher than the RBNZ’s last published forecast from November for a 1.2% rise. 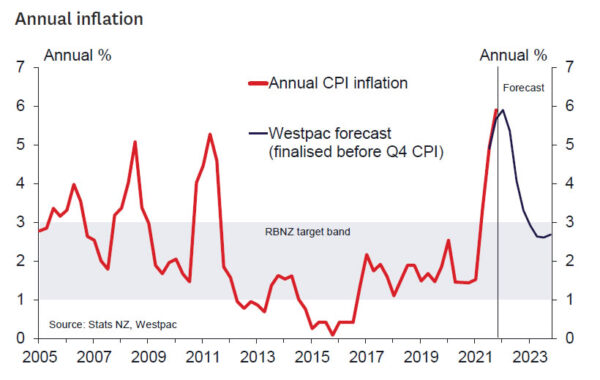 There has been a dramatic turnaround in New Zealand consumer prices over the past year. For most of the past decade, inflation struggled to crack the RBNZ’s 2% target. Now that picture has gone into reverse. Inflation is well outside the RBNZ’s target band, and it’s set to remain so for at least the next year.

Much of this turn around in inflation is a result of offshore factors. Disruptions to global manufacturing chains in the wake of Covid-19 have resulted in shortages of many consumer goods and production inputs. The resulting upward pressure on prices has been compounded by increases in international transport costs, with both shipping rates and oil prices rising rapidly over the past year. The combination of those factors has seen the price of tradables items (mainly imported goods) rising by a huge 6.9% over the past year. Even excluding fuel costs, tradable prices are up a hefty 4.4%.

But it’s not just imported prices are that charging higher. Domestic inflation has also been running hot. In fact, nontradables inflation – which is closely watched by the RBNZ – is now running at a multi-decade high of 5.9%. In part, that’s due to pressure on domestic supply chains and shortages of staff that have seen businesses operating costs pushing higher.

Compounding the rise in cost pressures, demand has also been running hot in some key parts of the domestic economy. Most notably, residential construction is booming, with build costs a major contributor to the lift in overall inflation. Households are also spending up on a range of domestic and imported items, like furnishings and recreational equipment. This strength in demand has meant that businesses have greater scope to pass on cost increases into final prices, rather than taking a hit on margins.

This potent cocktail of supply chain pressures and firm domestic demand has resulted in strong and widespread price increases across the New Zealand economy. That was reflected in the suite of core inflation measures released by Stats NZ today, which smooth through sharp quarter-to-quarter swings in prices and track the underlying trend in inflation. Most core inflation measures (including the RBNZ’s own estimate) are now running above 3%, and in many cases they are running above 4%. This underlying strength in pricing pressures indicates that inflation is likely to remain elevated for at least the next year. 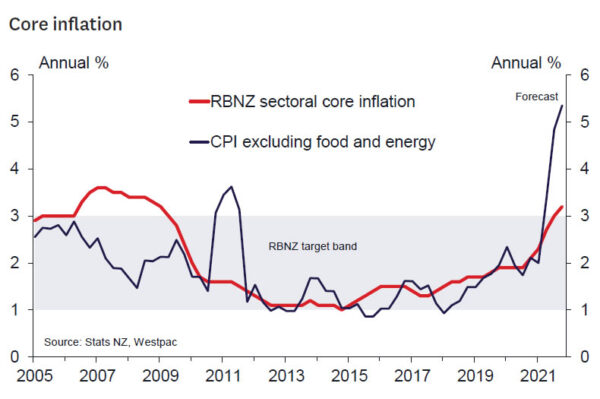 Inflation and the RBNZ.

Today’s result supports our expectation for a series of rate hikes from the RBNZ over the coming months.

Inflation is set to remain above the RBNZ’s target band through 2022, and it is likely to remain firm into 2023 (though there could be some quarter-to-quarter volatility associated with Covid). And although much of the strength in inflation is due to overseas cost pressures, domestic demand has also been a major factor pushing prices higher. That’s particularly important for the RBNZ. There’s not much the central bank can do to offset cost shocks from abroad that have already occurred. However, strong domestic demand means that price pressures could remain elevated even when the current overseas supply disruptions ease. And low interest rates are a key reason for the strength in households’ spending appetites.

Reinforcing the strong inflation outlook and of particular concern for the RBNZ, inflation expectations are now running well above 2% and are likely to feed into higher wages and prices over time.

With inflation bubbling away, Westpac is expecting a 25bp increase in the OCR at the upcoming February policy decision. We expect that will be followed by a series of OCR hikes over the coming year, with the cash rate peaking at 3% in 2023.

While the direction for interest rates is up, the economic landscape remains rocky and changing. Most notably, the continuing spread of Covid and its variants will challenge economic conditions here and abroad. We doubt that will prevent rate hikes altogether, but it does mean that the RBNZ is more likely to raise the OCR in measured steps of 25bps. In contrast, markets are pricing in some chance of a 50bp move from the RBNZ. We think that sort of large move is unlikely.

Looking into the detail of the December quarter inflation report, the major contributor to the rise in consumer prices was a further significant increase in construction costs. The cost of building a new home rose 4.5% over the December quarter. That follows similarly large increases in recent quarters, with construction costs up a massive 15.7% over the past year (as a comparison, over the past decade build costs tended to rise by around 4% per annum). Building activity has been charging higher over the past year, with low interest rates and the strong housing market encouraging development activity. At the same time, acute shortages of materials and staff have seen input costs rocketing higher. With a large pipeline of planned work over the coming year, we expect build costs will continue to rise at a brisk pace for some time yet.

Other housing costs also saw solid rises this quarter. That include strong gains in property maintenance costs. We also saw rents rising by 1.2% this quarter to be up 3.8% over the past year. Anecdotes are pointing to growing pressure on rents as we’ve moved into 2022. 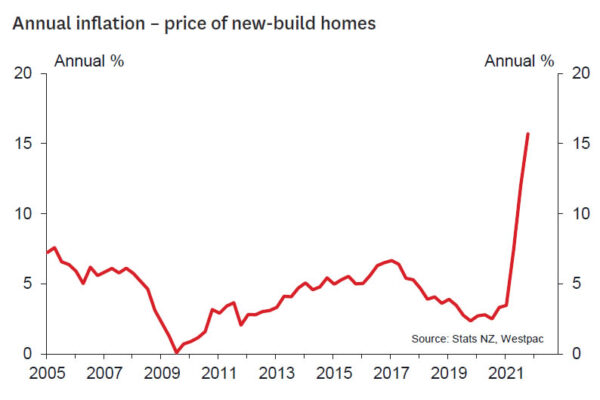 Petrol prices have also risen strongly in recent months, with local pump prices up 7.7%. Global oil prices rose strongly through the final months of 2021, and the related increase in transport costs is also boosting prices in the economy more generally.

While increases in housing and transport costs accounted for the lion’s share of this quarter’s rise, inflation pressures are widespread. Recent months saw firmness in the prices for a range of goods, including prices for many durable household items like furnishings and recreational equipment. Retailers continue to report difficulties sourcing stocks, as well as rising import costs in the face of strong demand.

Providing a partial offset to the strong rises in other categories, food prices fell 0.7% in the December quarter due to the usual seasonal decline in the prices of fresh vegetables. However, that’s actually a fairly modest fall in overall food prices for this time of year, with prices for groceries and takeaways/dining out pushing higher in recent months. Looking at 2021 as a whole, food prices rose by 4.7% over the past year. That’s the fastest rise we’ve seen in a decade. 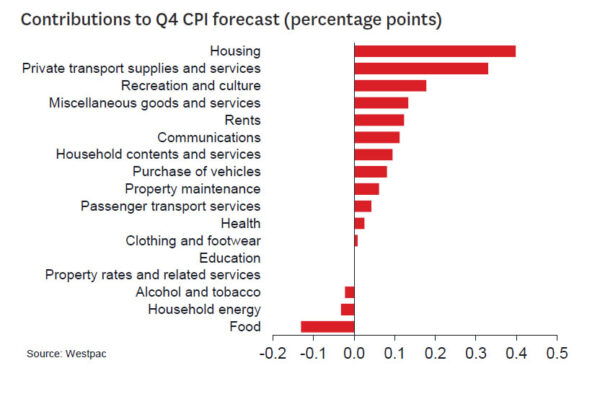