Brace for a More Aggressive Fed: Adding More Monetary Tightening to Our Forecast

In the statement that the Federal Open Market Committee (FOMC) released at the conclusion of its policy meeting on Wednesday, it was crystal clear that monetary tightening is imminent. Specifically, the statement said “with inflation well above 2 percent and a strong labor market, the Committee expects it will soon be appropriate to raise the target range for the federal funds rate.” We wrote in a report on Wednesday that “unless the economy comes completely off the rails between now and the next FOMC meeting on March 16, we think the Committee will announce a 25 bp hike in its target range for the fed fund rate at that meeting.” We continue to stand by that statement.

But what really struck us was a number of comments that Chair Powell made in his post-meeting press conference. For starters, Powell said that there was “very strong support” on the Committee for moving soon. In other words, it appears that a rate hike in March is all but assured. A reporter noted that market participants more or less expect the FOMC to hike rates at every other meeting this year, and then questioned whether the Committee could move faster. Powell did not rule out the possibility that the FOMC could potentially tighten policy at a faster pace. Of course, Fed officials are hesitant to pre-commit to policy changes. But we think it is telling that Powell not only left open the possibility of sequential rate hikes, but made a pointed effort to emphasize how different the economy is today compared to the past cycle when the FOMC raised rates no more than 25 bps per quarter, and that “these differences are likely to have important implications for the appropriate pace of policy adjustment.” Another reporter noted that there was not a Summary of Economic Projections (SEP) released after the meeting—the FOMC publishes its forecasts only in March, June, September and December—and questioned whether committee members may have revised their forecasts had a SEP been published. Powell replied that he likely would have raised his inflation forecast for 2022.

In light of this hawkish rhetoric from the Fed Chairman, who was speaking on behalf of the entire Committee and not just for himself, we have made some adjustments to our monetary policy outlook. Specifically, we now believe it is likely that the FOMC will hike rates by 25 bps at the March 16, May 4 and June 15 policy meetings (Figure 1). Previously, we thought that the Committee would stand pat in May. We think the Committee will take a breather on raising the fed funds rate at the July 27 meeting although, as we discuss below, we expect it will announce the start of balance sheet runoff at that meeting. We look for another 25 bp rate hike at the September 21 meeting before the Committee pauses again at the November 2 meeting ahead of the midterm elections. We then look for one more 25 bp increase in 2022 on December 14. We expect the more gradual pace of rate hikes in the second half of the year to be warranted by deceleration in spending and in some slowing in the rate of inflation, as well as by balance sheet runoff getting up to full speed. 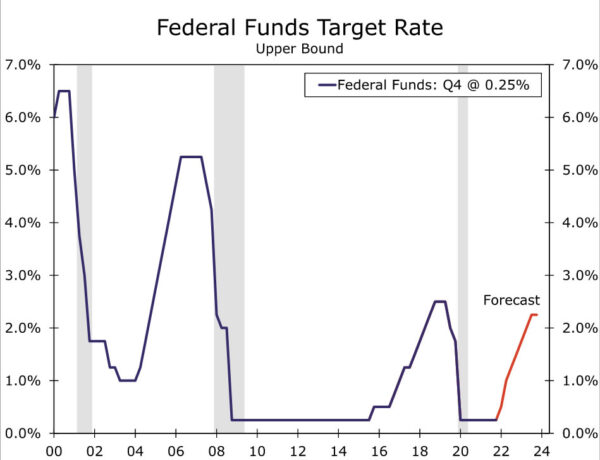 In sum, we forecast that the FOMC will raise its target range for federal funds rate by 125 bps between March and the end of the year. Previously, we had looked for 100 bps of tightening this year. We continue to expect that the Committee will raise rates by 75 bps more over the course of 2023 with 25 bp rate hikes in the first, second and third quarters of the year.

When the Chairman was asked about steps to reduce the size of the Fed’s balance sheet, he said that discussions were ongoing but that no decisions had been made yet. Furthermore, he said a number of times that the Committee will continue its discussions about balance sheet reduction in the next “couple” or “few” meetings. In other words, it does not seem likely that the Committee will initiate balance sheet runoff at its next meeting on March 16, but the Committee is clearly working to formulate a plan. We recently wrote a report in which we discussed our views regarding the pace of balance sheet reduction. Specifically, we thought the FOMC would announce its plans for balance sheet runoff at the September 21 meeting. We expected that the Federal Reserve would allow $20 billion of Treasury securities and $5 billion of mortgage-backed securities (MBS) to roll off its balance sheet in October. Then every month thereafter we anticipated that the Fed would increase the amount of the caps by $10 billion and $5 billion, respectively. At that pace, the central bank would allow up to $70 billion worth of Treasury securities and up to $30 billion worth of MBS to roll off its balance sheet in March 2023, and we thought the Fed would maintain that pace of balance sheet reduction through the end of 2024.

In light of Wednesday’s developments, we now think that the Committee will bring forward its announcement of balance sheet reduction to the July 27 meeting with commencement in August. As noted previously, we expect the FOMC will take a pass on a rate hike at that meeting, but the beginning of balance sheet reduction will also be another form of monetary policy tightening. If, as we currently anticipate, the Federal Reserve follows the same monthly schedule that was detailed above, then it will reach its monthly caps of $70 billion of Treasury securities and $30 billion of MBS in January 2023 rather than in March, as we previously forecasted (Figure 2). 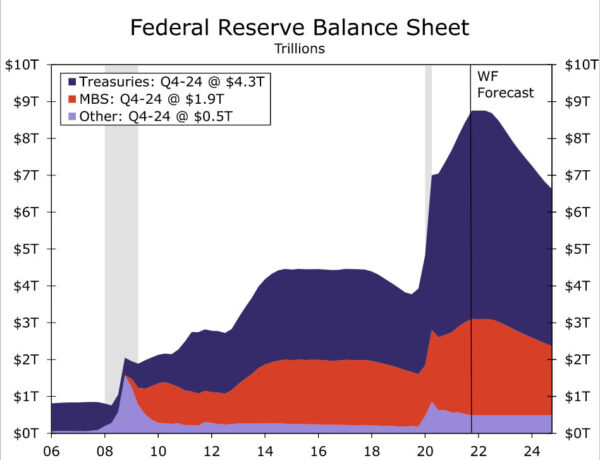 As noted above, Chair Powell said on Wednesday that the economy is in a different place today than when the last tightening cycle commenced in December 2015. The unemployment rate stood at 5.0% at the end of 2015, and the core rate of PCE inflation was roughly 1%. Today, the jobless rate is 3.9% and the core rate of PCE inflation is nearing 5%. Consequently, a more rapid pace of monetary tightening relative to the last cycle seems to be appropriate today. The steps we outlined above clearly would be more aggressive than what we thought would transpire prior to Wednesday’s FOMC meeting, let alone the steps the FOMC took during the last tightening cycle.