Action Forex
HomeContributorsFundamental AnalysisRBA Tightening Cycle to Begin in June, Hikes in Most Months in...

The Reserve Bank Governor surprised us on Tuesday with the Board’s decision to abandon its patient approach to monetary policy. 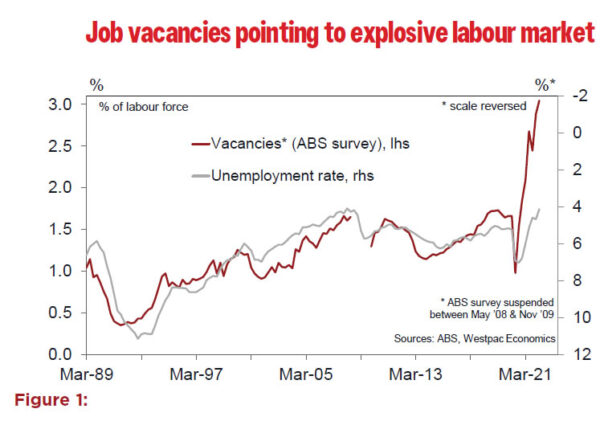 Accordingly, we have revised down our forecast for the unemployment rate which is now expected to reach 3.25% by year’s end compared to 3.75% forecast previously.

That much tighter labour market in turn points to a stronger lift in wages growth in 2023 with a peak of 4% now expected compared to our previous peak of 3.5%.

We also recently revised up our forecasts for the US federal funds rate, which is now expected to peak at 2.375% by end 2022.

We expect the RBA has also been raising its own expectations for the federal funds rate in the wake of recent data releases and the strong rhetoric from FOMC members, including Chair Powell.

And recall that this shift by the RBA Board, from a ‘patient’ to a more pro-active approach to monetary policy – is in the context of an election campaign that will be fought through most of April and the first half of May.

By establishing a clear expectation that the Board will now begin the tightening cycle in June, the RBA is willing to risk political controversy, particularly around any potential discussion of the role of the federal budget in changing the Board’s stance. Being aware of such complications but still being prepared to change the stance emphasises the Board’s determination to change the policy message.

Before the decision to abandon ‘patience’ Westpac had expected the initial rate hike in the cycle to come in August. That forecast was first made back on January 20th when most published analysts were still expecting the cycle to begin in 2023 or November 2022 at the earliest.

That January 20th shift was our first forecast change since June 2021.

Now we expect a much shorter tightening cycle with consecutive rate hikes in June (15bps); July (25bp); and August (25bps). That point would see the 2020 COVID emergency cuts unwound with the Board likely to take a pause in September.

The three hikes in 2023 will be in the context of accelerating wage pressures with the annual rate reaching 4% by mid-2023.

We would be surprised if the peak in the RBA cycle was too far out of synchronisation with the FOMC.

Our previous profile for 2022 had hikes in August; October and December in 2022 but the changed labour market situation and what looks to be a more urgent approach from the Board signals an earlier beginning to the cycle and only one ‘break’ in the sequence to mark the unwinding of emergency cuts.

The expected tempo is in line with the last tightening cycle over a decade ago in 2009–10. This came in two initial sequences of consecutive moves over three months – October-November- December in 2009 and March–April–May in 2010. The rationale at the time was to take back the GFC-related emergency cuts in anticipation of the inflationary and wage pressures which were building during the second round of the mining boom, when wages growth ultimately lifted to just below 4%.

A similar initial sequence of hikes in 2022 reflects the new urgency from the Board to unwind the emergency cuts during COVID and lift rates back to levels which are more reflective of the recovering economy. The further tightening into 2023 will be more about the backdrop of a record low unemployment rate, accelerating wages growth; and ‘sticky’ inflation as businesses continue to pass on the lagged cost increases resulting from supply shocks.

This 2.0% will nevertheless result in a significantly higher debt servicing ratio for the household sector than in the 2009-10 tightening cycle. (see Figure 2) That said, we are mindful of the $250bn in excess savings being held by the household sector and around $170 billion for business, which has been accumulated through COVID when policy supports to income combined with pandemic-related restrictions on spending. 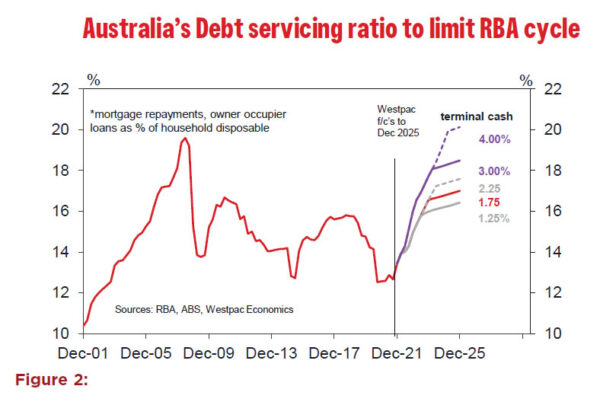 The federal government alone allocated around $330bn to supporting the economy through COVID. There has been a massive transfer from the government balance sheet to the balance sheets of households and business.

Much of this excess savings will be on the balance sheets of high income/low debt households. But it is also sitting with lowincome/ high debt households that will act as a potential buffer to higher rates. Banks report that borrowers are, on average, two years ahead on their mortgage repayments while there has been a $100 billion surge since Covid in balances in redraw facilities.

Without those buffers the peak cash rate would be lower. And there is a clear upside risk to the terminal cash rate if these buffers prove to be more substantial.

The RBA will also be mindful of the risks of over tightening into the buffers that eventually are worked through exposing households to damagingly high mortgage rates.

But there will still be considerable sensitivity to the higher rates. Consider for example the wave of fixed rate borrowers that took out 2% loans during the pandemic – this group is set to roll onto mortgage rates more than double their original rate over the course of 2023 and 2024.

Under our scenario the standard discounted variable rate for owner occupiers will be around 5.5% by mid-2023.

Signals for the RBA that the tightening cycle has peaked will include: a significant slowdown in consumer spending; falling house prices; and a stabilising unemployment rate aided by a lift in immigration back towards pre-COVID levels. Through 2023, inflation is forecast to move back into the upper end of the 2–3% target band as commodity prices and supply constraints ease globally.

With these changes in the cash rate profile and the volatile markets there will be some changes to our profile for fixed rates – both swaps and bonds. These will appear in detail in our monthly Westpac Market Outlook which prints tomorrow.

We also retain our view that the spread between AUD and USD long bond rates will narrow significantly over 2023 as the federal funds rate settles above the cash rate. Reflecting the higher AUD terminal cash rate we have lifted our target 10 year bond rate by end 2023 from 2.10 to 2.20 with the spread lifting from zero to 10 basis points.

Those relativities reflect the Australian economy’s greater sensitivity to the short end of the yield curve and the potential upward pressure on the long bond rate as the Federal Reserve embraces its Quantitative Tightening Policy.