The British pound has a tough time against the US dollar for more than a week now, making investors wonder when the next bullish round will take place. Next week’s session could set a new tone to the British currency as the calendar will get relatively busier. February’s GDP monthly data will be out on Monday, followed by employment and CPI inflation figures on Tuesday and Wednesday respectively, all due at 07:00 GMT. Expectations are not great, but if the data manage to defy the increasing conservatism within the Bank of England (BoE), the pound could gain, though, perhaps only modestly.

Several major economies experienced an inflation spike during the month of March and the UK will not be an exception. The headline CPI is expected to spiral to a new three-decade high of 6.7% y/y from 6.2% previously, whilst the core equivalent, which excludes volatile food and energy prices, is expected to stabilize around 5.1%y/y. 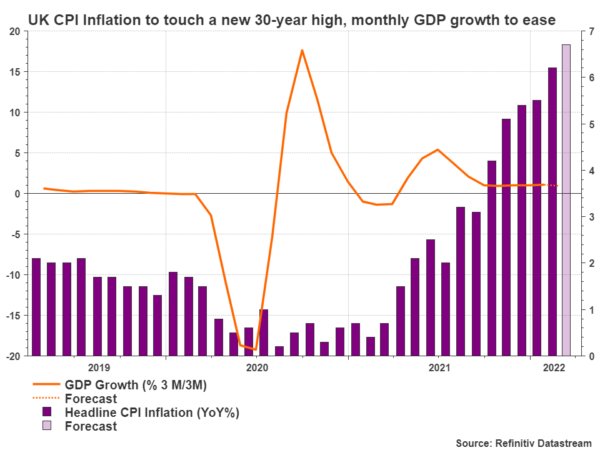 The Bank of England (BoE) has hiked its interest rate three times to 0.75% so far this year with the scope to combat accelerating inflation and cool it down to its 2.0% price target, but apparently more is needed to be done. The BoE chief clearly stated last month that monetary tightening will continue in the coming months, though surprisingly, he did not suggest a larger 50 bps rate hike, which several policymakers backed in February. Instead, he judged that only a modest tightening may be appropriate in the coming months, with futures markets currently being almost certain for four 25 bps rate increases by December.

The reasoning behind the BoE’s renewed skepticism is that although it is focused on taming inflation, reducing stimulus too aggressively could damage the UK’s evolving post-lockdown recovery, especially as the war in Ukraine and the mounting sanctions against Russian oligarchs are increasingly threatening to worsen the cost of living in the energy-importing UK economy and shock its financial system.

Therefore, the BoE may wisely attempt to build in some insurance against a potential growth slowdown and data releases during the next few months could play a key role in determining that. Besides CPI inflation readings, monthly GDP growth and employment figures for February could shed some light on economic conditions this week, but the war factor will be absent from the stats and perhaps investors may consider them outdated. Yet, the figures could still be worthy to watch as those may provide some clues on the health of the UK’s economy before Ukraine’s invasion.

The news, however, may not be very encouraging or better to say it could be more neutral overall for the pound. Forecasts point to a monthly growth slowdown to 0.3% from 0.8% in January, with the three-month average expected to touch a one-year low of 0.9% from 1.1% previously. 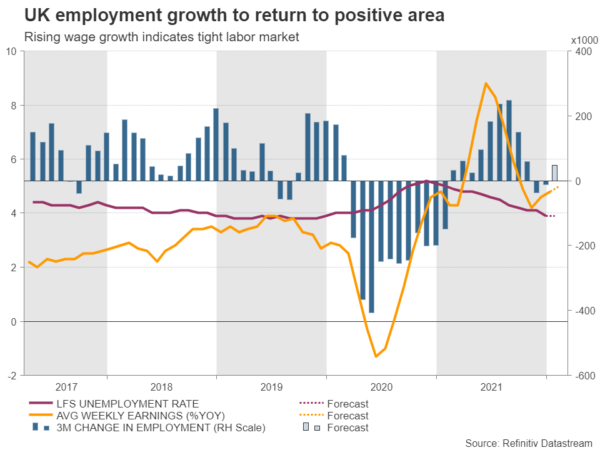 Turning to the employment report, analysts anticipate the economy to have created 48k new jobs after the 12k contraction in the previous month. Such an addition could still be the lowest in a year, and probably not strong enough to press the unemployment rate below 3.9%. Nevertheless, with average weekly earnings (excluding bonuses) expected to keep trending higher to 4.0%, a weak employment growth could be considered to be a result of persisting labor shortages.

BoE in a challenging situation

Household spending as a share of disposable income has been falling at a faster pace in the UK than in the EU and the US during 2021 and the post-Brexit EU-UK relationship remains strained, disrupting trade and labor supply. Moreover, Sunak’s spring statement indicated that the government is not comfortable in opening its liquidity taps again in the way it did during the pandemic.

Hence, the ball seems to be in the central bank’s hands and how the economy will perform in the next quarters could direct policy accordingly. But if a stagflation situation develops, the BoE could find itself between a hard and a rock place. Therefore, in this case, adjusting policy settings in either direction could be risky. 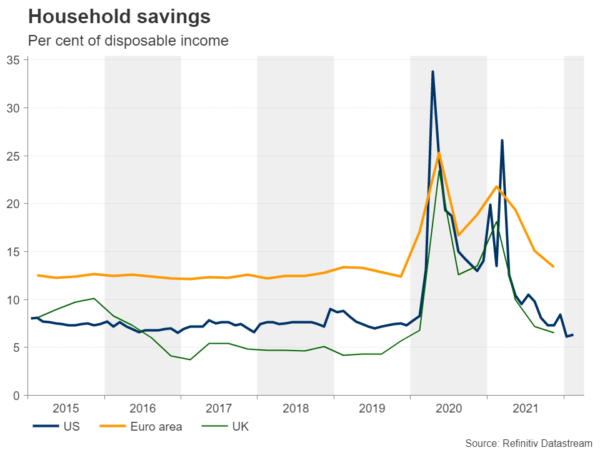 For now, weaker-than-expected figures, especially on the labor front, could justify the BoE’s policy conservatism and downplay investors’ expectations of four rate increases, likely squeezing pound/dollar below the 1.3000 level. If that turns out to be the case, the price may initially test the bottom of the one-year-old bearish channel around 1.2925 before heading for the 50% Fibonacci retracement of the 1.1409 – 1.4248 upleg at 1.2820. If the sell-off further sharpens, the next pivot point could occur around the September 2020 low of 1.2670.

Alternatively, should the data reveal a resilient economy, traders may remain patient and wait for Q2 figures before they question the central bank’s careful policy approach. Nevertheless, if the stats strongly beat expectations and inflation soars, the focus will turn to the constraining 1.3128 -1.3200 zone. If upside pressures knock down that wall, the next resistance could commence around the 50-day simple moving average (SMA) at 1.3300.