Now that it is generally accepted that the RBA tightening cycle will begin in June, with a series of consecutive hikes, interest is firmly targeted at the likely peak in rates in the cycle. The steady 4% unemployment rate that has just been reported for March will take some pressure off the markets’ push for a hike in May.

That is a long way from the 3.4% currently priced into the market and the “theoretical” 3.5% associated with 1% real and 2.5% inflation that is often favoured by central banks.

The lower nominal terminal rate which we, and others, favour relies upon the household sector being quite sensitive to rising rates due to their high levels of household debt.

We estimate that a terminal rate of 2% would see that debt servicing ratio settle above the ratios of the two previous cycles. Note that the “cycle” in 2017/18 was not driven by a rising RBA cash rate rather the banks’ responses to macro prudential tightening policies. (Figure 1). 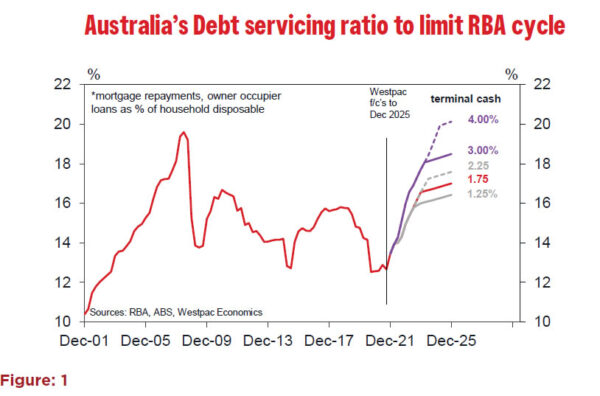 There are significant uncertainties with this methodology.

These are all formidable questions.

The Review included a detailed analysis of the Bank’s Securitisation data base. This data base covers detailed data on all securitisations of mortgages that have been implemented by banks and non banks. It does not cover the vast majority of mortgages which the banks do not choose to securitise and hold directly on their balance sheets.

Nevertheless, it is the most comprehensive publicly available record of the profile of mortgages in the Australian market.

Some important facts that we learn from the data base are that:

The data base lends itself to scenario analysis. The chosen scenario was a 200 basis point increase in the variable mortgage rate. 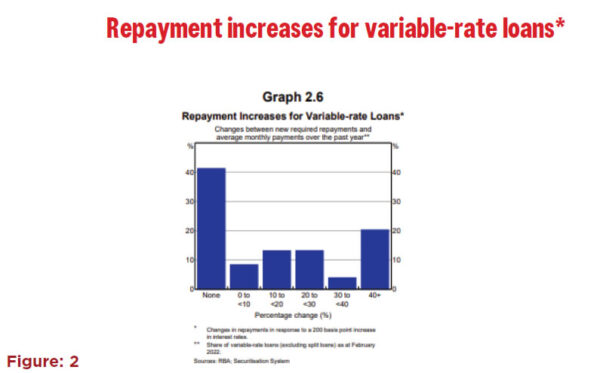 Impacts on the economy are likely to reflect the responses of those borrowers who are hardest hit by the rate increases – the scenario analysis points to 20% of borrowers facing a 40%+ increase in repayments.

This scenario applies an immediate increase in the variable mortgage rate of 200 basis points whereas our central case is that the increase will be introduced over the 12 months beginning in June this year.

The scenario analysis results for fixed rate borrowers assumes that the borrowers move to floating rate at roll over date. (Figure 3) 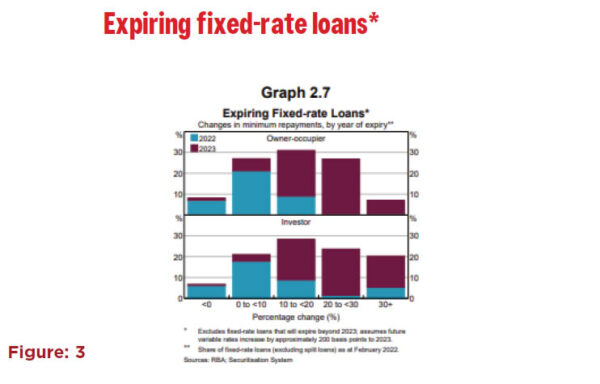 For owner occupiers 65% would see a lift in repayments of less than 20% with around 50% for investors.

Two thirds of fixed rate loans are set to mature by end 2023 and many of these would have been 2–3 year loans written at that 2.4% average during 2020 and 2021. Under the scenario analysis the loans roll over into floating rate loans at a loan rate of around 5.5% (reflecting the 2% lift in the standard variable rate).

With this in mind the results of the scenario analysis are surprisingly benign.

As discussed in the introduction the data base does not cover the bulk of mortgages that are held directly on bank balance sheets. That observation that two thirds of fixed rate loans mature by end 2023 is important – a more front loaded profile of low rate borrowers transitioning to higher rates in 2023 would exacerbate the impact of higher rates in 2023. Only one major who has released that proportion of maturing fixed rates in their recent results and their number seems to line up quite closely with that two thirds estimate for the securitised portfolio.

This scenario analysis highlights the sensitivity of some borrowers to the 2% rate increase. But because it is a static analysis there is no consideration of the feedback effects on the wider economy to the borrowers.

The advantage of looking at earlier periods of rising rates is that the results capture those feedback loops.

The Review notes another RBA study which also simulates a 200 basis point increase in interest rates from current levels which would lower real housing prices by around 15% from current levels. With inflation running at the 2.5% RBA target over the simulation period that would imply a 10% reduction in nominal house prices over that two year period.

The scenario analysis is not built to assess the feedback effects of falling house prices on borrowers’ behaviour.

But the historical analysis will only provide limited insights into the big issue here which is how the accumulated buffers affect the behaviour of borrowers when rates are rising.

For example, concerns about falling house prices and rising rates might prompt borrowers to seek to preserve the buffers by cutting back on other expenditure.

And we do not know whether those buffers will be available to those borrowers in the vulnerable groups – 20% of variable rate borrowers will face a 40% lift in average repayments; the cohort of fixed rate borrowers who will move from a 2% fixed rate to 5.5% variable and the requirement to pay down principal and interest.

The RBA concludes “although the estimated increases in repayments are sizable for some borrowers it should be manageable for most.”

The ultimate terminal rate in this cycle will be determined by the availability of the buffers for those who need them most and the overall behaviour of those facing “sizeable” increases.

Because the static scenario analysis does not address so many of these issues we should treat it only as a helpful input into the discussion around the terminal rate rather than a definitive assessment.

We are comfortable to continue with the dynamic, historical approach which does at least take into account the feedback effects experienced in earlier cycles.

But with no historical precedents or any way of modelling the impact of the “buffers” there is considerable uncertainty about how the economy will evolve once the standard variable mortgage rate starts to rise.