Bank of England Preview: Another Rate Hike and Active QT

In line with consensus and market pricing, we expect the Bank of England (BoE) to hike the Bank Rate by another 25bp to 1.00% but focus is definitely much more on forward guidance than the rate hike itself.

Just like with other central banks there is a discrepancy between what the Bank of England communicates and what markets are pricing. Bank of England surprised markets in March by sending a much more dovish signal with no one voting for a 50bp rate hike (markets were pricing in a probability of that ahead of the meeting) and Cunliffe voting for an unchanged Bank Rate. The BoE also changed its forward guidance by stating that “some further modest tightening in monetary policy might be appropriate in the coming months” vs. “some further modest tightening in monetary policy is likely to be appropriate”, so definitely more dovish.

It is one of the key meetings with updated projections. Given the hawkish market pricing we expect the BoE to continue forecasting inflation below 2% three years from now, which was one reason for the more cautious forward guidance at the March meeting. 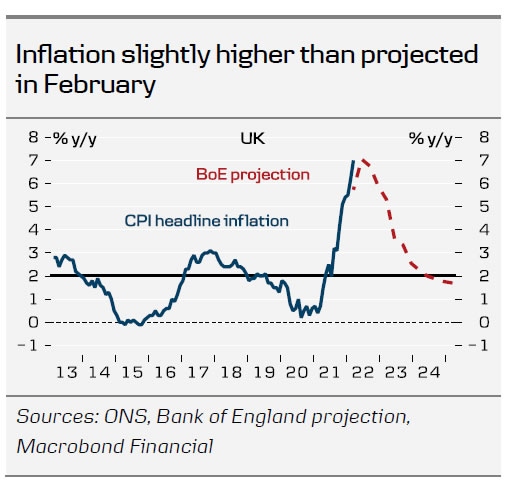 We expect the Bank of England to stick to its more dovish signals, although higher-than-projected inflation and rising inflation expectations increase the probability of the BoE turning more hawkish once again. The Bank of England sounds concerned about the growth outlook and the BoE projected a rise in the unemployment rate eventually in the February 2022 Monetary Policy Report. If we are right, however, about the BoE sticking to its dovish signals, it is likely to weigh on GBP given the hawkish market pricing. Markets are pricing in a total of 150bp for the rest of the year (so basically a 25bp rate hike at each of the remaining meetings with risks skewed towards a 50bp rate hike at one of the upcoming meetings). Our Bank of England call is two additional rate hikes (August and November) but see risks skewed towards more rate hikes. 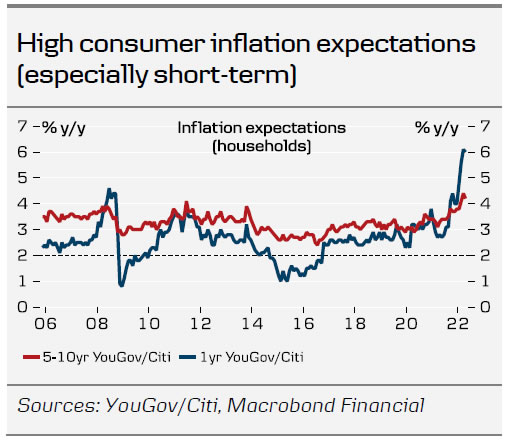 The Bank of England said that it will start considering selling gilts directly to markets (active QT) when the Bank Rate reaches 1%, so we are likely to hear more about this at the meeting. The Bank of England already announced that it will no longer re-invest maturing gilts. We expect selling will be modest given central banks’ general fear of financial market implications. There is also the question about the timing. At the February meeting, the BoE announced that it will “initiate a programme of corporate bond sales to be completed no earlier than towards the end of 2023“, which suggests some caution about outright selling of bonds. We expect active gilts selling to start in Q4 22 or Q1 23. 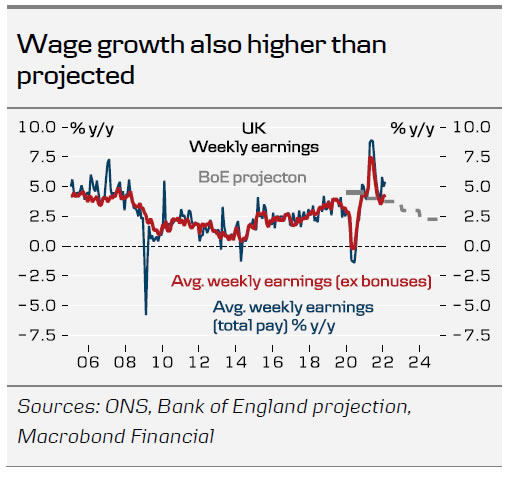 We are still of the view that EUR/GBP will trade around 0.84 this year. On the one hand, GBP usually benefits when USD performs but on the other hand GBP is no longer supported as much by relative rates and things may turn around if ECB turns more hawkish and/or BoE remains more cautious than what markets are pricing in. GBP/USD has declined a lot recently and we think the cross can move further down over the coming year. 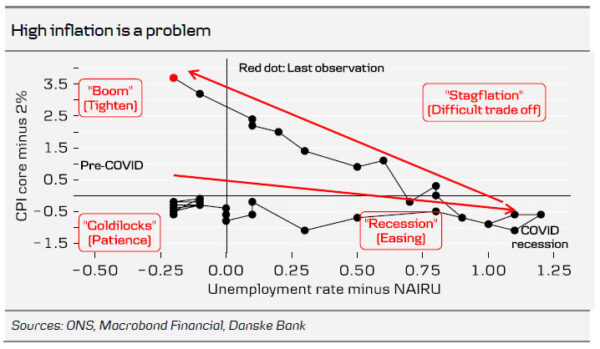 Our Bank of England call summarised

We expect the Bank of England to hike the Bank Rate by another 25bp at the May meeting, taking the Bank Rate to 1.00%. We expect two additional rate hikes this year (August and November) while markets are pricing in a total of 150bp for the remainder of the year (including a rate hike in May). We see risks skewed towards more aggressive rate hikes but Bank of England seems more cautious than previously due to the weaker growth outlook.

We expect the Bank of England to announce “active QT” (selling government bonds to markets) as communicated earlier. We believe active QT will start in either Q4 22 or Q1 23.