American stocks were relatively mixed on Monday as the earnings season and worries about the Federal Reserve continued. The Dow Jones declined by 60 points while the tech-heavy Nasdaq 100 index rose by 30 points. Some of the top companies that announced mixed results on Monday were Moody’s, Clorox, and Global Payments. Others to watch this week will be Airbnb, Pfizer, Apollo Global, and Moderna among others. Meanwhile, the Federal Reserve will start its meeting today and then deliver its interest rate on Wednesday. Analysts expect that the bank will hike interest rates and start its quantitative tightening policy. The decision comes as data continues to show that the American economy is slowing. For example, the ISM manufacturing PMI fell from 57.1 to 55.4.

The euro was little changed against the US dollar ahead of important economic data from Europe. On Monday, data revealed that the Euro area consumer and business confidence declined in April as inflation concerned continued. These numbers mean that the European Central Bank (ECB) will have a difficult time hiking interest rates this year. Later today, the key European data to watch will be the latest German unemployment rate. Analysts expect that the unemployment rate moved from 5.0% to 4.9%. Other important data to watch will be producer price index (PPI) and the unemployment rate from the European Union. Christine Lagarde will also deliver a speech.

The Australian dollar rose after the latest interest rate decision by the Reserve Bank of Australia (RBA). The RBA decided to hike interest rate for the first time in years. It increased rates to 0.35%, which was higher than the expected 0.25%. The bank also signaled that it would keep hiking interest rates later this year in a bid to lower inflation. The decision came a week after data by the Australian Bureau of Statistics (ABS) showed that inflation rose to the highest level in years. Like in the United States, there are signs that the country’s inflation is peaking. Also, there are concerns about the Chinese economy as the government persists with covid-19 lockdowns.

The EURUSD pair declined slightly as focus shifted to the upcoming Fed interest rate decision. It dropped to a low of 1.0560, which was slightly lower than last Friday’s high of 1.0570. It has moved slightly below the 25-day and 50-day moving averages while the Stochastic Oscillator has moved below the oversold level. The Relative Strength Index is moving sideways. The pair will likely keep falling ahead of the Fed decision. 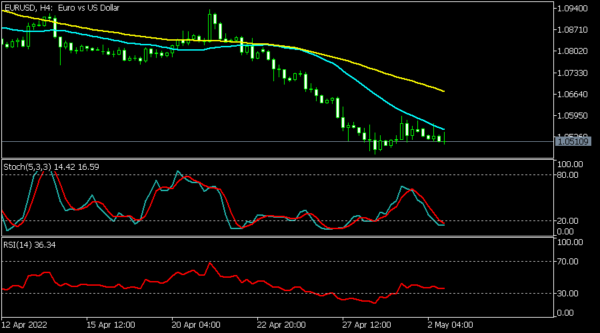 The GBPUSD pair retreated to 1.2511, which was slightly lower than last week’s high of 1.2618. It declined slightly below the middle line of the Bollinger Bands. It has also moved slightly below the 25-day moving average while the Stochastic oscillator is moving downwards. The Relative Strength Index has also dropped below the neutral point at 50. The pair will likely keep falling as bears target the support at 1.2460. 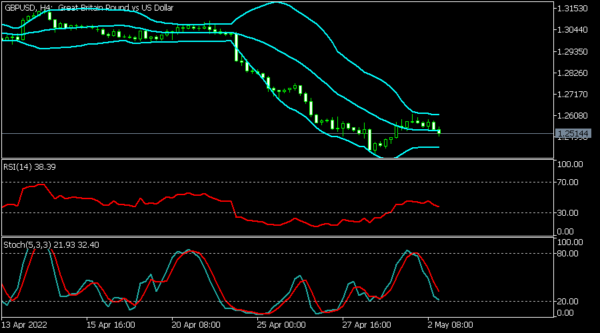 The EURCHF pair rose to a high of 1.0292, which was the highest level since April 27. The pair has moved above the important support at 1.0200 and risen above the 25-day and 50-day moving averages. The Relative Strength Index has moved close to the overbought level while the Stochastic Oscillator is pointing lower. The pair will likely keep rising as bulls target the key resistance level at 1.03200. 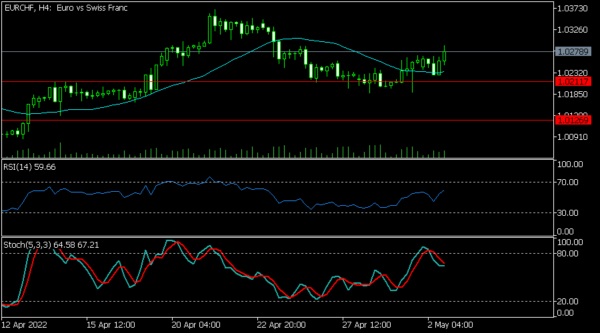