FOMC Steps Up the Pace of Monetary Tightening

As universally expected, the Federal Open Market Committee raised its target range by 50 bps at the conclusion of today’s policy meeting. The decision to raise the target range, which now spans 0.75% to 1.00%, was unanimously supported by all ten voting members of the Committee. The FOMC shrugged off the modest decline in real GDP that occurred in Q1-2022 and instead focused on the fact that “household spending and business fixed investment remained strong.” The statement went on to say “job gains have been robust in recent months, and the unemployment rate has declined substantially.” In other words, the FOMC does not seem to be overly concerned at present about the state of real economic activity. But the Committee is resolute in its aim to bring down inflation, noting it is “highly attentive to inflation risks.” The FOMC continues to characterize inflation as “elevated” due to “supply and demand imbalances related to the pandemic, higher energy prices, and broader price pressures.”

The Committee also announced steps to start reducing the size of the Fed’s balance sheet, which currently stands at $8.9 trillion. Starting on June 1, the Federal Reserve will allow up to $30 billion worth of Treasury securities to roll off the central bank’s balance sheet for the following three months (Figure 1). The Fed will also allow up to $17.5 billion worth of mortgage-backed securities (MBS) to roll off the balance sheet. These caps are a bit below our expectations of $40 billion and $25 billion, respectively. The FOMC’s plan is then to increase the size of the monthly caps to $60 billion and $35 billion, respectively, beginning in September, and to maintain the monthly caps at those levels for an indefinite period of time. These terminal caps of $60 billion and $35 billion were in line with our expectations. 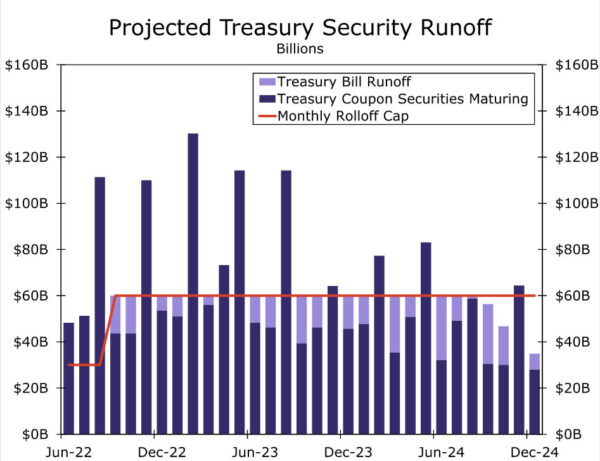 There was no “dot plot” released after today’s meeting—the Committee publishes its Summary of Economic Projections (SEP) only in March, June, September and December—so there was no explicit reference to the FOMC’s current thinking regarding the pace of tightening going forward. In our view, the statement was rather balanced, and we do not think that it signals an even more rapid pace of tightening than what many observers anticipate. Yes, the Committee noted that inflation is “elevated” due, at least in part, to “demand imbalances.” Higher rates can help to moderate growth in aggregate demand. But the FOMC also said that “the implications for the U.S. economy” from “the invasion of Ukraine by Russia … are highly uncertain.” Not only are these developments “creating additional upward pressure on inflation,” but they are likely to weigh on economic activity. The statement also said that the “COVID-related lockdowns in China are likely to exacerbate supply chain disruptions.”

The bottom line is that the FOMC likely will be hiking rates further. Indeed, it explicitly said that further tightening “will be appropriate.” In our view, another 50 bps rate hike at the June 14-15 FOMC meeting is all but assured, unless the economic outlook changes materially over the next six weeks. Thereafter, the pace of tightening will start to depend more on incoming data. We currently project that the FOMC will increase its target range for the fed funds rate by 25 bps at the July 26-27 meeting (Figure 2). But with the market fully priced for a 50 bps rate hike at that meeting, we acknowledge that the risks to our current outlook are skewed to the upside. In that regard, Chair Powell noted in his post-meeting press conference that a 75 bps rate hike is “not something the Committee is actively considering,” but there is a “broad sense” that 50 bps are on the table for the next “couple” of meetings. Stay tuned. 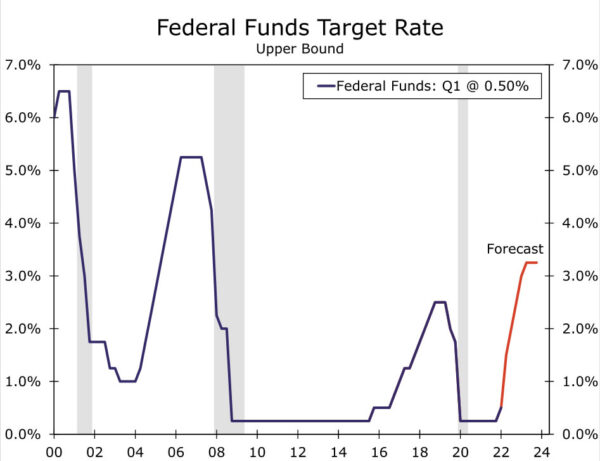