Bank of England Review: Another Rate Hike But Mixed Signals

In line with expectations, the Bank of England (BoE) hiked the Bank Rate by another 25bp to 1.00%. As expected, attention was on forward guidance and not the rate hike itself. As we had expected, the BoE kept the softer forward guidance in place by stating “some degree of further tightening in monetary policy may still be appropriate in the coming months” (our emphasis). In our view, the Bank of England is definitely sending some mixed signals and the committee is very divided on what is the appropriate path going forward. On the one hand, three policymakers voted in favour of a larger 50bp rate hike due to high underlying inflation pressure. On the other hand, two policymakers voted against the “may still be appropriate” forward guidance because balance of risk is “more evenly balanced” according to them. Seemingly, they are more concerned about the economic outlook. Notably, the Bank of England now projects negative growth in 2023 based on market pricing, which is most likely weighing on some policymakers’ assessment. 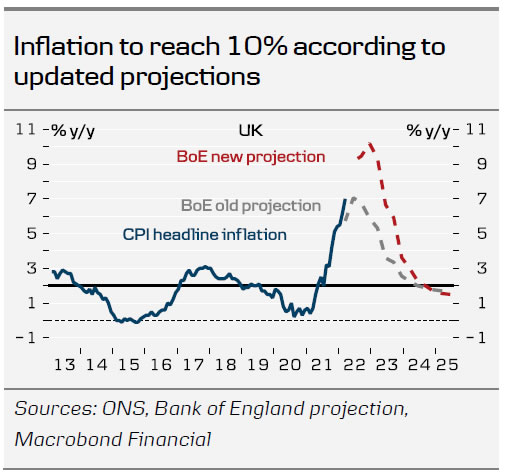 Overall, in our view, it seems fair to conclude that forward guidance is mixed but mostly to the dovish side, at least compared to market pricing. Additionally, it also means that it is more difficult to say what the Bank of England will do from here because of the internal disagreements. Markets reacted accordingly with EUR/GBP moving up one figure from 0.841 to 0.852 (GBP/USD below 1.24) and 2yr gilt yields went briefly below 1.40% (from nearly 1.63% yesterday) but are stabilising around 1.42% at the time of writing. Markets are now pricing in an additional total of 117bp rate hikes this year. 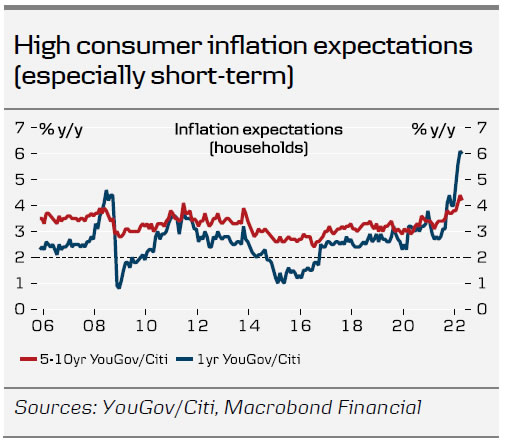 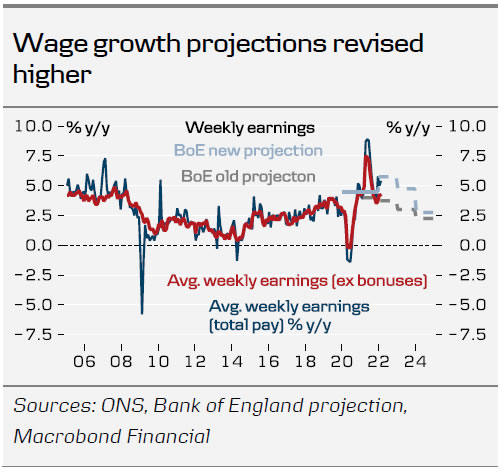 We are more dovish than markets, as the Bank of England puts more weight on the economic outlook than what markets believe in. We expect EUR/GBP to remain range-bounded around 0.84. On the one hand, a re-pricing of Bank of England (and perhaps a more hawkish ECB) is likely to weigh on GBP but on the other hand GBP usually appreciated vs EUR in an environment where USD performs.

Against our expectation, the Bank of England did not outline a plan for active QT (selling gilts directly to markets) in connection with today’s meeting. Instead, the Bank of England said that they are working on a plan, which will be presented in connection with the August meeting, so they can “make a decision at a subsequent meeting”. Hence we now expect active gilts selling to start in Q1 23. This is another reason why the BoE may slow the pace of rate hikes (or even pause for a number of meetings). 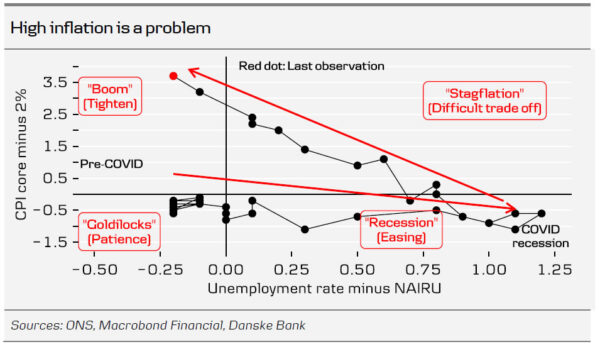 Our Bank of England call summarised

As expected, the Bank of England hiked the Bank Rate to 1.00% in connection with the May meeting. The Bank of England was, however, sending mixed signals with some members arguing for a larger rate hike while others thought it would be appropriate to remove the forward guidance on possible future rate hikes.

We now expect the Bank of England to start active QT (selling gilts directly to markets) in Q1 23.