China’s Data May Cause More Drama Next Week

Chinese data may kick off more drama in global markets during the Asian session on Monday at 03:00 GMT as urban investment, industrial output, retail sales, and new yuan loans are expected to falter for the second consecutive month, exacerbating fears of economic stagnation in the second quarter. Such news could further batter stocks and currencies such as the Chinese-sensitive Australian dollar, which are already facing their longest losing streak since 2008.

Growth jitters resurfaced at full swing this month as central bankers started to talk about recession just after beginning on their inflation fighting course. Discouragingly, higher-than-expected US CPI figures telegraphed this week that inflation may not easily go away and will likely keep weighing on consumers’ pockets, with stocks, risk currencies and cryptos all plummeting in response, while the drop in bond yields and the impressive rebound in the safe-haven Japanese yen confirmed the flight to safety as well.

China’s economy is becoming another headache. Its late zero-Covid lockdown measures just popped up at the wrong time, alongside the war in Ukraine and a fragile domestic real-estate sector. That has spread pessimism that the already damaged supply chain links could inevitably lead the global economy to a cliff edge in the second quarter despite the PBOC’s extensively accommodative monetary strategy.

Chinese data could trigger the next sell-off

Monday’s data releases for the month of April could be more evidence to China’s eggshell-like economic landscape. Retail sales, which are a major proxy for consumption, are expected to almost double their March decline to -6.0% y/y from -3.5% previously. Stats on new yuan loans may echo the weakness in demand as the amount is forecast to half to 1.5bln in April. Likewise, the squeeze in industrial output is forecast to pick up steam for the second consecutive month, falling sharply from 6.0% y/y to 0.5% and urban investment may face another pullback to 7.0% y/y from 9.3% in March. 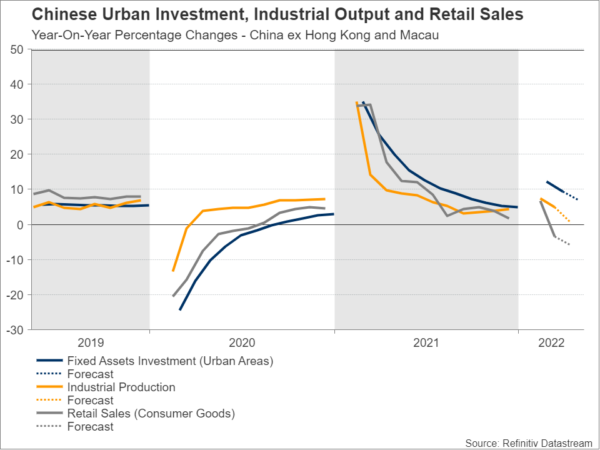 Recent stats have also revealed a slowdown in China’s exports in April that continued to worsen, rising at their weakest pace in two years thanks to the onerous restrictions in the country’s biggest trade hub Shanghai. Moreover, business sectors returned to contraction in the same month according to PMI numbers. Hence, another row of disappointing data releases could reasonably defend growth concerns at the start of next week, potentially activating fresh selling, especially in the Australian dollar, which is heavily dependent on China’s economic outlook. 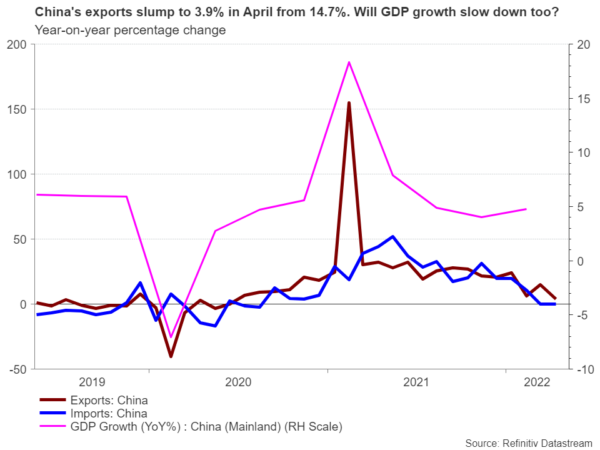 Where next for aussie?

The aussie has fully erased its 2022 gains, re-activating its 2021 broad downtrend this week after slumping to an almost two-year low of 0.6827 against the US dollar. The support area of 0.6800 and the 50% Fibonacci of the 2020 rally at 0.6766 are currently under the spotlight. Should the figures paint a gloomier picture for China’s economy, raising alarms for reduced demand for Australian exports, aussie/dollar may dive below that floor to test the 0.6540 constraining region, while deeper, the next stop could be around the 61.8% Fibonacci of 0.6300.

Alternatively, a better-than-expected outcome may feed optimism that China’s accommodative monetary and fiscal settings may prevent a sharp economic squeeze despite the harsh lockdowns. In this case, aussie/dollar may attempt to crawl up to January’s low of 0.6966 and then speed up to the 38.2% Fibonacci of 0.7050.