Fresh economic data was limited this short week, with financial markets closed on Monday for Juneteenth. Attention was focused on Powell’s testimony where he notably acknowledged the risk of recession, sending longer-term bond yields lower. So while summer may have officially kicked off this week, the economy may be a bit ahead of the curve, with the backdrop already featuring some falling leaves. 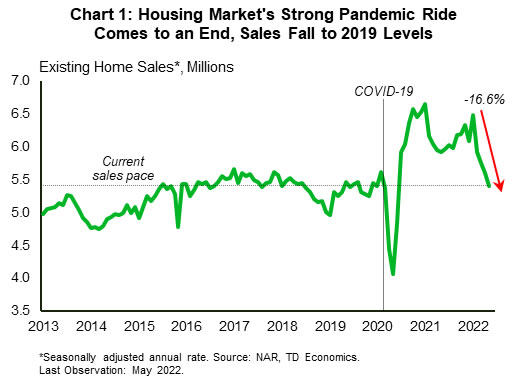 We did get an update on how the housing market was faring in the face of higher rates as of May. Existing home sales fell by 3.4%, stretching the string of declines to four months. After a solid ride during the pandemic, activity has fallen back to 2019 levels (Chart 1). With sales falling and inventories recording a small uptick, the months’ supply of inventory at the current sales rate has been edging higher. We’re not in balanced market territory yet, but the trend is slowly tilting toward it (Chart 2). Sales in the much smaller and more volatile new single-family home market regained some ground in May, but are still down 17% from their cyclical peak at the end of 2021. Led by gains in the South, new single-family housing inventory is piling up, rising to 444 thousand – the highest level outside of the 2005-06 housing boom period. This has brought this smaller segment of the housing market well into buyer’s territory (Chart 2). 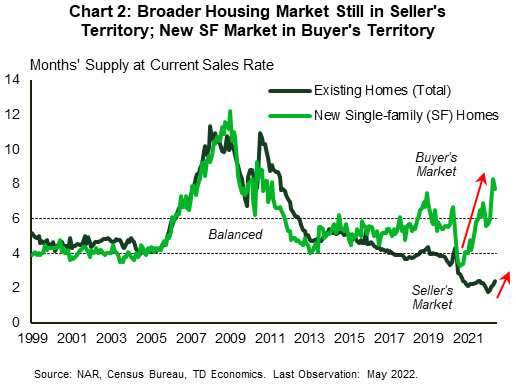 The slump in housing demand is in large part a response to deteriorating affordability from the sharp increase in interest rates. Thirty-year mortgage rates are already near 6% – almost double their level at the start of the year, and a level not seen since 2008. The Fed is focused on bringing inflation down from its 40-year high with aggressive interest rate hikes. So it is unlikely that we’ll see any respite on the rates side anytime soon. As a result, we expect home sales to trend lower in the quarters ahead, while prices also likely to give back some of the recent gains starting later this year. A tight inventory backdrop will help limit some of the downside. Our latest home price forecast for East Coast States can be found here.

Fed Chair Powell testified before Congress this week and shared a similar view of the housing market: “Rate rises should impact house prices fairly quickly”. Powell’s testimony reconfirmed the Fed’s resolve to tackle inflation, calling the inflation fight “unconditional”. When pressed on the likelihood of a recession, Powell reiterated that this was not the intended outcome, but that it was “certainly a possibility”.

Recent Fed reports (see here and here) confirm that recession odds in the 1-2 years ahead have increased. What’s more, the Atlanta Fed’s GDP tracker (not an official forecast) points to 0% growth for a second quarter of this year, which would imply that that we may already be close to a technical recession. Our latest forecast also expects a sharp deceleration in economic activity and a modest increase in the unemployment rate in the year ahead, but it still points to decent growth of a little over 2% this year and 1.4% next. Still, there is indeed a very ‘Thin Margin for Error’. Whatever the outcome, autumn or a mild winter, one thing is for sure, the economy’s hot summer days have already passed.

Inflation was the name of the game this week, as consumer prices in May came in above expectations. Equity markets sold off on the day in response as the upside surprise in inflation as increased the risk of more aggressive rate hikes from the Bank of Canada (BoC) dampened sentiment. On a year-on-year basis (y/y), inflation climbed to 7.7%, higher than our forecast for 7.3%. Price pressures were widespread, both across the CPI basket and on a regional basis. This suggests that inflationary pressures are becoming even more entrenched. Our Quarterly Economic Forecast published earlier this week, had increased our forecast for inflation through the end of this year and into 2023. 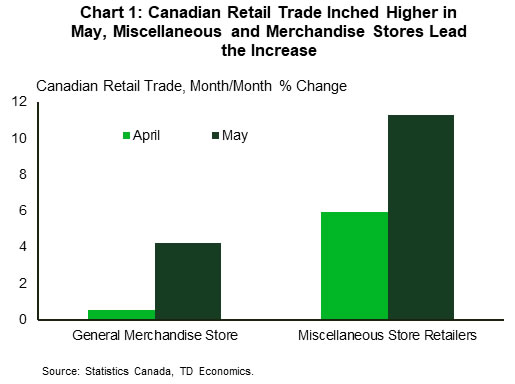 Though retail spending data was strong for goods, we expect households to rotate spending towards services over the summer months in a return to pre-pandemic spending patterns. This rotation will hopefully mitigate some inflationary pressures stemming from goods, which were up 10.4% y/y in May. But the anticipated acceleration in services inflation (Chart 2) means that domestically driven price pressures will cause the BoC to speed up its rate hiking cycle. 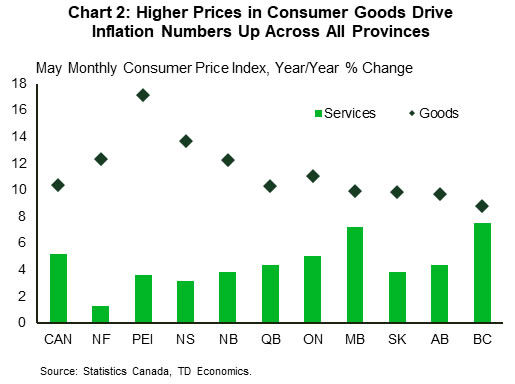 On upcoming interest rate moves, former BoC Governor Stephen Poloz once said, “No one ever blames a firefighter for using too much water if, at the end of the day, you save the house”. Though this was a popular strategy at the beginning of the pandemic, time has shown that the bank may have used too much water, and now it needs to be quick to turn off the taps. This week’s inflation numbers for May and retail sales data for April further reinforce our view that the BoC will continue to hike aggressively, raising its policy rate by 75 basis points in July and September in order to save the house from flooding.

Looking ahead to next week, monthly GDP numbers will be a crucial indicator to see how far into excess demand Canada’s economy is. Our latest forecast noted that we expect high inflation and rising interest rates to cause a slowdown in GDP growth in the latter half of this year. However, near-term GDP data are not likely to show much let up in the second quarter, especially as preliminary retail sales numbers continue to point to growth.