Over-Heating Labour Markets May be Nearing a Turning Point

We expect the Canadian and U.S. labour markets to have added jobs in July, albeit both at a slower pace than earlier in the pandemic recovery. We expect the Canadian employment count edged up 15k, to partially offset a 43k drop in June. In addition, we also look for the unemployment rate to tick higher to 5.0% from the record low (back to at least 1976) 4.9% in June with the number of people looking for work bouncing back from a decline of almost 100k in June. US employment growth likely slowed to a still-strong 250k in July, alongside a tick up in the unemployment rate to 3.7%. In both Canada and the U.S., demand for workers is running well-above pre-pandemic levels, and increased competition has been pushing up wages.

Still, that may be heading for a turn. Slowing global demand and surging labour costs are just some of the reasons to expect a slowdown in overall labour demand. Initial jobless claims in the U.S. have been on the rise since late March. While job openings are still very high, they have been edging lower in recent months. To-date, that hasn’t resulted in higher unemployment. But going forward, slowing demand means on average it will take gradually longer for new labour market entrants, or those that just lost employment, to find work again. We expect that dynamic will begin to push the unemployment rate higher over the second half of 2022, with the pace of increase accelerating in 2023 as higher inflation and interest rates further cool labour demand. 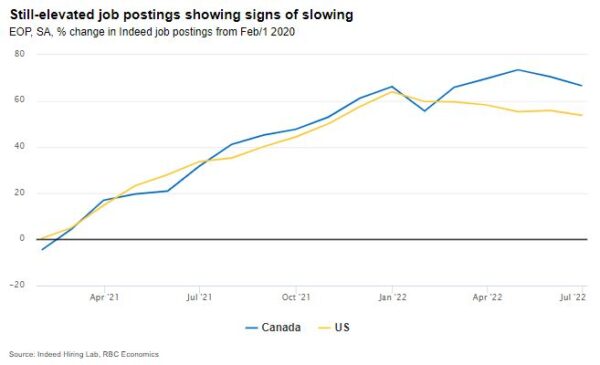 The Canadian merchandise trade surplus likely edged lower in June after surging to $5.3 billion in May on higher oil prices and a surge in aircraft exports. Oil prices moved higher again in June, but we look for the trade balance excluding energy products to partially reverse May’s increase. 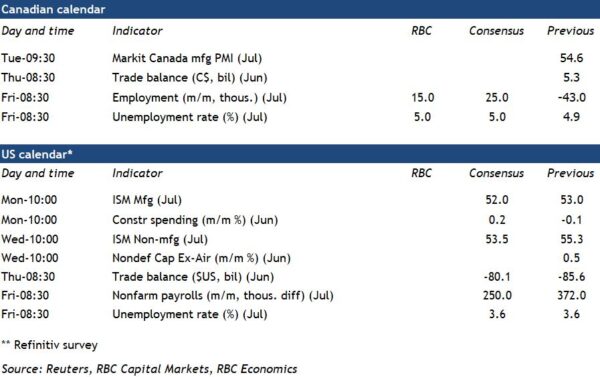