In the United Kingdom, preliminary GDP growth data for the second quarter will hit the markets at 06:00 GMT Friday. The British pound has suffered heavy damage this year, falling behind even the war-ravaged euro despite a series of rate increases from the Bank of England. This dataset is unlikely to change this dynamic. Instead, the pound is at the mercy of global risk sentiment, which seems unstable.

It has been a tough year for sterling. While the spotlight has been on the euro getting smoked by the energy crisis, the pound has performed just as badly, even though the Bank of England has raised interest rates at every single meeting since late last year.

This softness seems to boil down to two elements. First, the UK is not immune to the global energy shock. It might not import most of its energy from Russia directly, but it is still a net importer and since energy markets are so interconnected, it ends up paying higher prices regardless. As such, the trade deficit has blown up this year.

Currencies don’t like trade deficits. It means a nation imports more than it exports, which over time tends to devalue a currency. The one thing that’s even worse is having a huge government deficit at the same time. This is the famous ‘twin deficit’ problem. When an economy like the UK runs twin deficits for a long time, it essentially depends on foreigners to fund those deficits, making it sensitive to any shifts in the global mood. 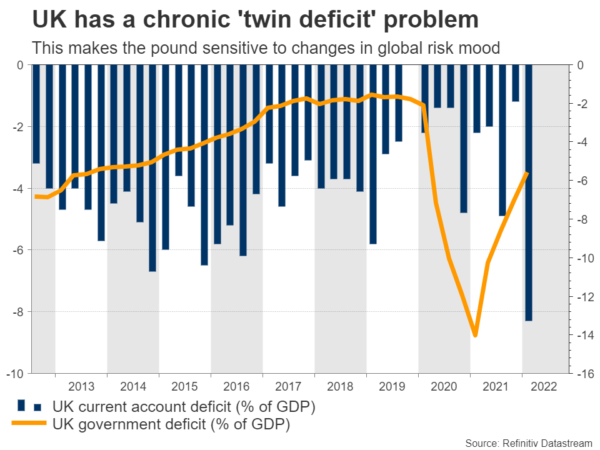 Which brings us to the second obstacle for the pound – its sensitivity to global risk appetite. Cable has become very vulnerable to any swings in stock markets, having a stunningly strong correlation with Wall Street this year, which in turn has gone downhill. Amplifying this effect has been the US dollar’s transformation into a safe-haven asset.

Turning to the upcoming growth data, the British economy is forecast to have contracted by some 0.2% in the second quarter as the cost of living crisis took its toll. Of course, this won’t be a shock for the Bank of England, which already penciled in a negative print in its forecasts.

In fact, the BoE went a few steps further. It projected five quarters of economic contraction starting in the final quarter of this year, implicitly predicting a year-long recession. But it still raised interest rates by a half percentage point, arguing that inflation is simply far too high. 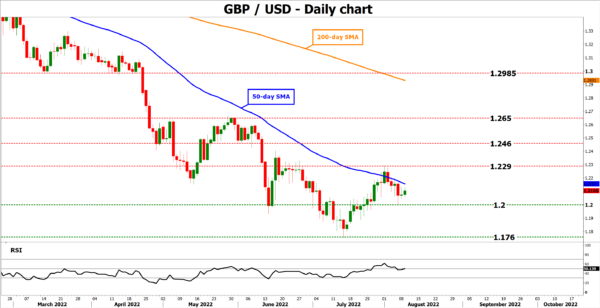 In case the GDP print manages to overcome forecasts, Cable could edge higher, with the first major barrier to the upside being the 1.2290 zone.

On the flipside, if the numbers are even worse than expected, the pair could instead inch lower for another test of the 1.2000 region.

Admittedly, this dataset won’t change much. Market participants already have a good idea of what the BoE will do over the next few months – raise rates in a slow, methodical manner. What is less certain is how risk appetite will evolve.

In this sense, the risks seem tilted to the downside for Cable. Stock markets have recovered substantially over the past seven weeks, but for dubious reasons. First and foremost, the bond market started to panic about a recession, which in turn dragged yields down and eased the pressure on equity valuations. 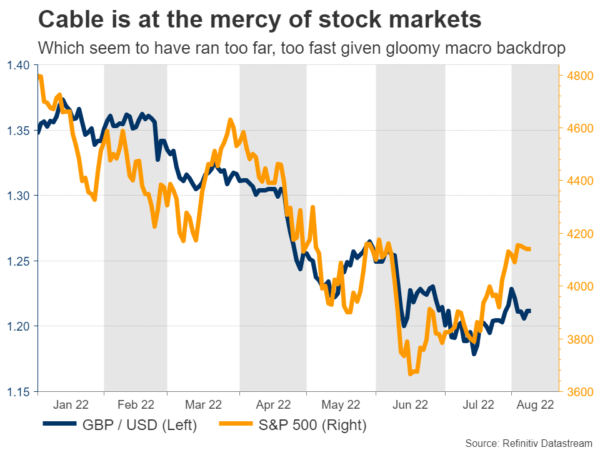 The earnings season hasn’t been great either. Adjusted for inflation, real earnings growth for the S&P 500 has turned negative for the year. Even corporate profits can’t keep up with inflation.

And with stock markets rallying while yields drop, financial conditions have loosened again, putting more pressure on the Fed to roll out another shock-and-awe rate increase. Meanwhile, most forward-looking indicators suggest that avoiding a recession would be a miracle.

It’s difficult to be optimistic about a sustained recovery in Cable in this unstable regime.