The rapid rise in Canadian inflation likely slowed in July as global commodity prices fell—mirroring a drop in the U.S. inflation earlier this week. By our estimate, headline inflation slowed to 7.7% on a year-over-year basis, down from 8.1% in June. The price of gasoline has declined almost 10% since July, though it remains up more than 30% from a year ago. By contrast, consumer natural gas prices spiked higher last month—particularly in Ontario and British Columbia.

There continue to be signs that global inflation pressures are easing off. Oil prices are down 25% from early June. Global freight shipping costs and times, by air and ocean, have fallen significantly over the past few months. And on the domestic front, though higher interest rates are pushing up mortgage payments, home buying costs (which have contributed substantially to price growth over the last year) have shifted from record monthly increases over the winter to declines in the spring and summer. Our own cardholder data shows consumer spending is still very strong, but has plateaued through July and into August.

Despite the expected dip in next week’s consumer price report, inflation remains much too high and isn’t likely to return sustainably to the Bank of Canada’s target levels without the economy cooling. In June, over 60% of products and services in the CPI were growing at above the Bank of Canada’s 1% to 3% target range. Against that backdrop, the BoC will continue to forcefully raise the overnight rate. We expect a 75 basis point increase in September to build on the 100 basis point hike—the largest since 1998—in July. 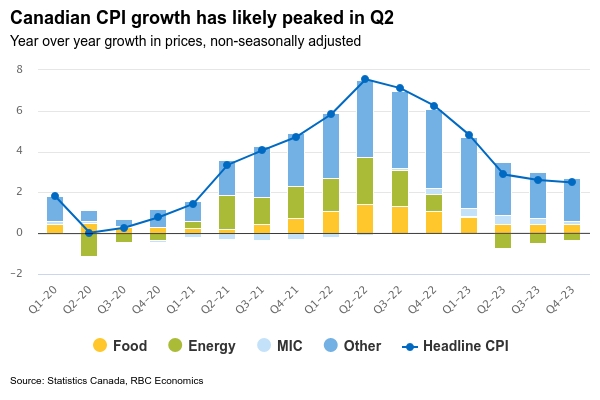 The early estimate of July retail sales was relatively flat at +0.3% month-over-month from June. Our own RBC consumer tracker showed spending plateauing after surging out of pandemic lockdowns.

Canadian home resales will show another decline in July based on early local market reports.
Canadian housing starts likely remained firm in July given the increase in permit issuance to over 300,000 in June. 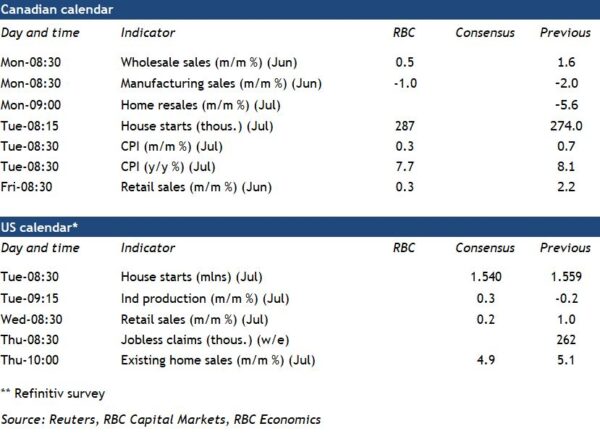