Action Forex
HomeContributorsFundamental AnalysisBank of Canada to Hike Again But Could Be Nearing End of...

The Bank of Canada is almost certain to raise interest rates again on Wednesday when it announces its latest monetary policy decision at 14:00 GMT. After July’s jumbo-sized rate increase when the Bank lifted borrowing costs by a full percentage point, investors are anticipating another big, though slightly smaller, rate hike of 75 basis points. However, when it comes to the Canadian dollar’s reaction in the FX market, what will be more relevant is any clues that there may not be many rate increases left in the pipeline.

Canada’s economy lost some momentum towards the middle half of 2022 and the slowdown is evident in both the labour and housing markets. Employment fell in both June and July, although a modest rebound of 15k is expected on Friday when the August report is published.

The unemployment rate is projected to tick up slightly to 5.0%, but that would still be a historically low level not seen since the mid-1970s.

Household debt is something to worry about

The cooling down of the housing market has been a little more profound, however, with home prices falling in several districts in the last few months. Rising borrowing costs and sky-high prices are likely to blame, and soon, the soaring cost of living as high inflation begins to bite could further dampen demand in the property sector. But even if this eventually translates to year-on-year declines in house prices, there would be a long way to go before prices become affordable again given the spectacular rally that was fuelled by the pandemic stimulus. 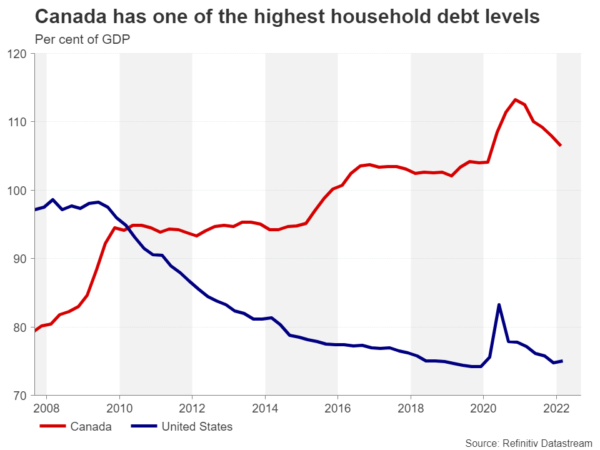 For the Bank of Canada, the main concern from a sharp slowdown in the housing market is the risk of a wider fallout in the economy due to Canada’s very high level of household debt. With household wealth coming under threat from weaker house prices and consumer demand expected to weaken in the coming months as disposable incomes are squeezed from surging inflation, policymakers may want to tread more carefully going forward after slamming on the brakes quite forcefully since April.

But any dovish tilt from such caution may not come until later in the year as inflation remains too high at the moment despite some early signs that it has peaked. Canada’s consumer price index rose by 7.6% year-on-year in July, slowing from a fresh four-decade high of 8.1% in June. 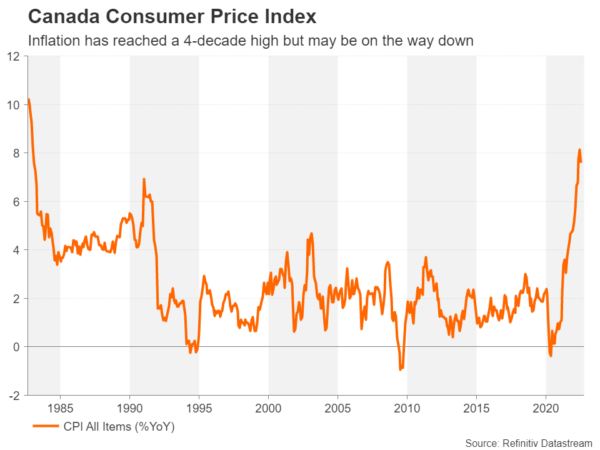 Investors have priced in a more than 90% probability of a 75-basis point hike in the overnight target rate in September. But more significantly, they see rates peaking somewhere between 3.75% and 4% next year. That implies that should the BoC proceed with raising rates to 3.25% from 2.50% currently, it will likely have to go into lower gear after September as it approaches the end of its tightening cycle. 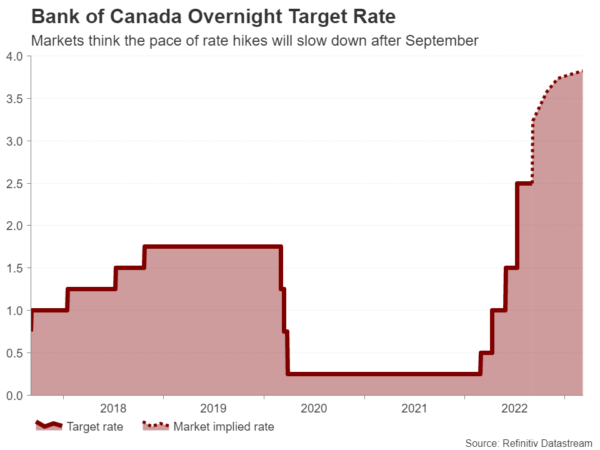 However, that estimate of the terminal rate is based on the very big assumption that oil prices remain on a downward path and domestically sourced natural gas prices do not spiral uncontrollably higher as they have in Europe. Moreover, although Canada’s self-sufficiency in energy gives it some protection from the energy crisis in terms of excessive prices, it also means a comparatively smaller economic pain and therefore less reason for the BoC to be cautious than other central banks.

Hence, it’s not surprising that the Canadian dollar is staring at yearly gains versus all the other majors, bar the US dollar. With the Federal Reserve equally, if not, more hawkish than the BoC, dollar/loonie has been steadily rising this year.

Should policymakers show signs that they are fretting about a hard landing in the economy from a possible crash in the property market and hint that the era of hefty rate increases will come to an end after September, dollar/loonie could surpass the 20-month peak of 1.3223 reached in July and aim for the 123.6% Fibonacci extension of the July-August downleg at 1.3341.

However, if the Bank maintains its hawkish stance for now and flags the need for further tightening, the pair could initially slip towards the 61.8% Fibonacci retracement of 1.3033 before retreating to its 50-day moving average.

Looking beyond the September policy decisions of the Fed and BoC, the focus for dollar/loonie traders will become increasingly about which central bank will be more successful in achieving a soft landing and perhaps less so about the nominal pace of tightening.