New Canadian inflation data will set the stage for more hikes from the Bank of Canada. Next week’s report lands just after a surprisingly firm U.S. inflation reading for August (which likely cemented at least another outsized 75 bps increase in the Federal Reserve’s fed funds target range in September.) Here in Canada, headline annual CPI growth likely cooled for a second consecutive month on lower gasoline prices. We look for a dip from 7.6% in July to 7.2% in August—down from a recent peak of 8.1% in June. But beneath the weakening headline number, some prices are still powering up. Food price growth likely accelerated again. And we look for the rate excluding food and energy products to hold steady at 5.5%. Alongside this, the Bank of Canada’s preferred core inflation measures also likely remained elevated.

We continue to believe the headline inflation rate has hit its peak as lower commodity prices and easing global supply chain pressures lower growth in goods prices. But we don’t expect ‘core’ measures to peak until later this year when higher interest rates start to cut deeply into consumer demand.

The Bank of Canada recently raised its overnight rate by another outsized 75 bps earlier this month, bringing the total increases to 300 bps since the current hiking cycle began in March. The housing market was first to be hit, and with August resale units down almost a quarter from a year ago, it continues to feel the pinch. But even outside housing, cracks are beginning to show. StatCan’s advance estimate was for a 0.1% contraction in real GDP in July and a 2% decline in retail sales. July’s manufacturing sales ticked higher (excluding price impacts), though we are looking for some slowing in next week’s flash August estimate. Overall, the bank’s ongoing commitment to keep tightening monetary policy in the face of stubbornly high inflation pressures should further stall consumer demand and inflation pressures—but not without pushing the economy into a moderate recession. 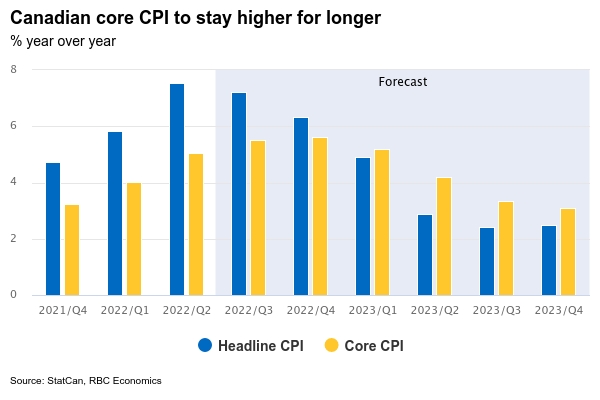 We expect Canadian retail sales to have declined 2% in July, in line with StatCan’s preliminary estimate. That’s due to lower sales at gasoline stations. Sales for other goods have stayed mostly flat through the month, according to our own tracking of RBC spending data. 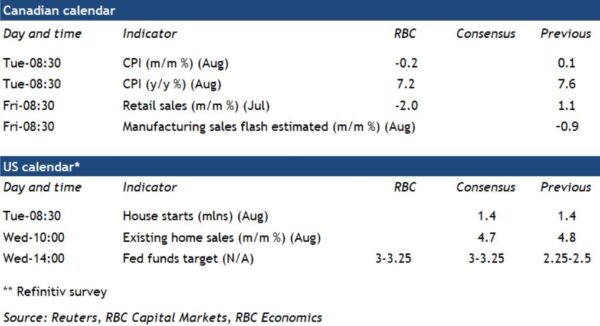