Canadian GDP likely remained flat through July—narrowly improving on Statistics Canada’s advance estimate for a 0.1% decline. It ticked up in August but not by much, gaining 0.1%. All three months point to a broader levelling out of economic activity as the post-pandemic rebound loses steam. Though the full impact of surging inflation and interest rates have yet to be felt, economic data has already been losing momentum. Employment outright declined in July and August alongside weaker readings in total hours worked. Both wholesale and retail sales saw activities flagging in July as well. And housing markets continued to retrench as interest rates rose. But offsetting those declines were higher oil production in Alberta as well as an increase in manufacturing sales volume (+0.6%).

We expect headline Canadian CPI growth will also edge down in the months ahead on lower commodity prices and moderating global supply chain pressures. But inflation remains too high and too broad to prevent further aggressive Bank of Canada interest rate hikes. Those will continue to weigh on consumer demand as well as output growth into 2023. We expect the August flash GDP estimate to show only a small increase in output (+0.1%). And while spending is still strong, according to our own RBC cardholder data, it has levelled off slightly into the fall. Consumers will continue to feel the sting of surging inflation. And a higher cost of borrowing means debt servicing payments will consume a larger share of household disposable income. As the Bank of Canada continues on its hiking path, with another 50 basis point increase on the horizon in October, consumer purchasing power will continue to erode, steering the economy into a mild to moderate recession by next year. 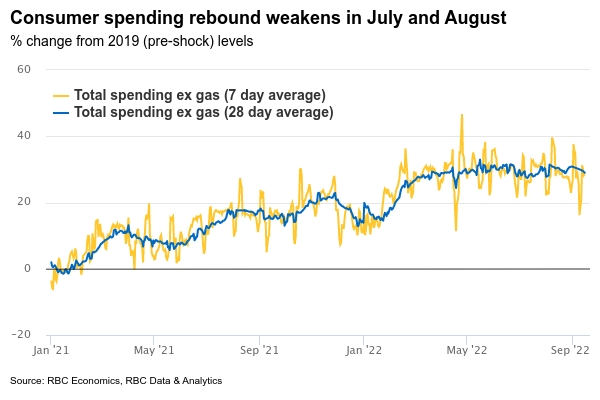 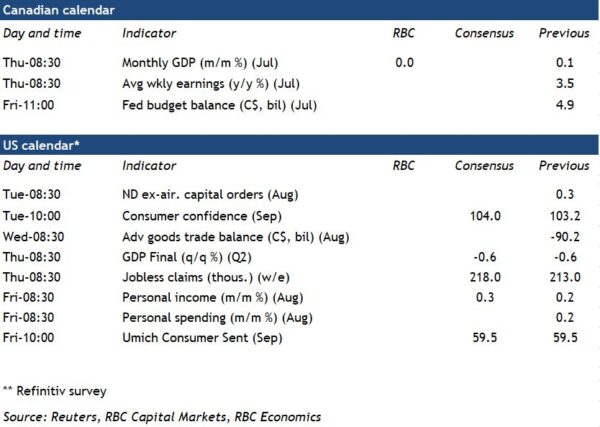