The last days of summer 2022 were centered around the FOMC meeting which ended Wednesday with another 75bps hike, bringing the federal funds rate to its highest level in 14 years. The announcement was largely expected by markets after last week’s CPI print came in hotter than expected, with core CPI rising to 0.6% month-over-month (m/m). However, the Fed’s updated projections underlined a narrative that was more hawkish than what markets had been expecting, resulting in a volatile reaction from equity and bond markets. The S&P 500 ended the day down by 1.7% and the two-year treasury yield, which briefly rose above 4.1%, closed back at its pre-meeting level of 4%. Further digestion of the decision has seen the two-year yield rise to 4.2% and the S&P 500 retreat further, ending the week down 4.1% as of the time of writing.

Chair Powell used his press conference to reiterate his Jackson Hole speech, emphasizing that the Fed would not shy away from its fight to bring inflation back to its 2% target. Powell noted that a restrictive policy stance would likely be required for some time and that this would likely result in a sustained period of below trend growth and softer labor market conditions. Progress on the inflation front has been mixed so far with headline inflation showing early signs of peaking (largely due to falling gas prices), but core inflation has remained stubbornly high which has prompted the Fed to hold the line on its aggressive policy stance.

According to the updated Fed projections, the median estimate for the federal funds rate (FFR) is now expected to reach 4.4% by year-end, a full percentage point above their previous estimate in June (Chart 1). FOMC members expect that further rate increases will be required in 2023, with the median projection for the terminal rate reaching 4.6%. This represents roughly 150bps of further rate increases from the current level of 3 – 3.25. 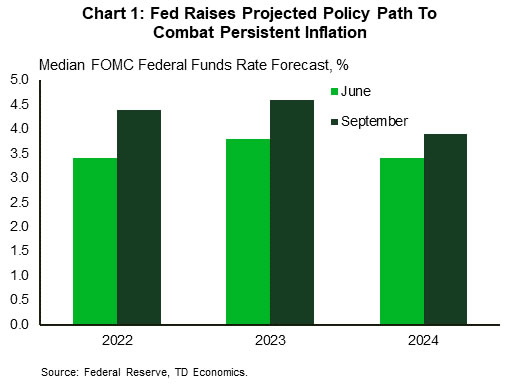 Elsewhere this week, the interest rate sensitive housing sector continued to show further signs of softening. Existing home sales declined by 0.4% m/m in August, marking its seventh consecutive month of declines. Seasonally adjusted median home prices also dipped deeper into negative territory, falling for the three straight months (Chart 2). Reduced affordability continues to act a headwind on consumer demand for housing, and with mortgage rates now well above 6%, that headwind is turning into a gale. Higher rates are not only affecting sales, but also residential construction. While housing starts rebounded in August (rising 12% m/m to 1.58M units), the 3-month moving average of year-over-year changes is still down 5.4%. Moreover, a pullback in August housing permits suggests more weakness in the months ahead. This lines up with recent readings of builder sentiment, which has now fallen for nine consecutive months and currently sits at a 28-month low. 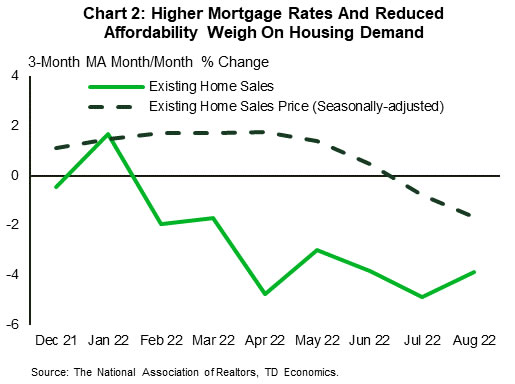 None of this will sway the Federal Reserve to lift its foot off the pedal as they continue to drive interest rates higher to bring down inflation. With the FOMC charting a course that nearly inverts the 2007/2008 run-down in the policy rate, the current and expected future path of monetary policy will continue to act as an increasing weight on the economy moving forward.

It was another tough week for equity markets, with the world’s leading central bank driving home the message that it will fight inflation at all costs. Even after raising rates 300 basis points this year, the Fed still expects a heavy dose of tightening ahead. The Canadian dollar, alongside many other currencies, has suffered from this hawkishness stateside despite the Bank of Canada also being hawkish in its messaging.

Canadian inflation did take a step in the right direction in August, but remained very high at 7% year-on-year (y/y). Lower prices at the pump helped the headline, but contrary to the situation in the U.S., core inflation pressures also eased slightly in August to 5.3% y/y (Chart 1). Perhaps even more encouraging, the one-month change in core CPI was a relatively benign 2.6% (on an annualized basis). We never like to read too much into one month’s number, but it is reassuring to see the softest monthly increase in core inflation in over a year. That said, the average of the Bank of Canada’s trio of core inflation measures was 5.2% y/y. That is a long way from the 1-3% range the Bank would like to see. So, while August’s data was encouraging, the Bank is a long way from bringing inflation pressures to heel. 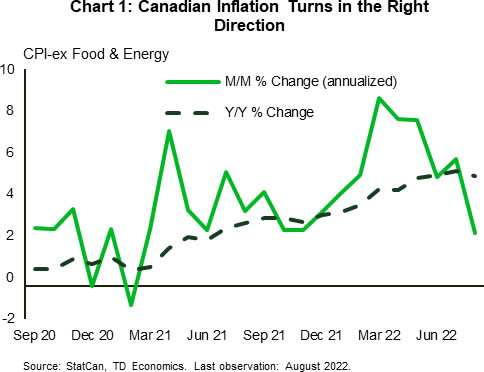 One particularly discouraging aspect of the report was the high food inflation – prices at grocery stores were up 10.8% versus a year ago, the fastest pace since 1981. Given groceries are some of the highest frequency purchases consumers make, this has been pinching household budgets, and no doubt causing Canadians to economize.

That frugality was seen in the retail sales data released on Friday, which fell by 2.5% m/m, after a jump up in June. The headline decline came as prices at the pump fell, bringing gasoline station receipts down 14.2% on the month. But the weakness went farther than that. Core retail sales, which exclude gasoline and auto sales, fell 0.9% – the first decline in seven months. Given the high inflation environment, this means core sales were down 2% m/m in real terms.

July retail data is quite backward looking at this point, so Statistics Canada also released a flash estimate for the August figures based on an incomplete sample. That measure rose 0.4% m/m, a very disappointing rebound. This suggests consumers are feeling the pinch from inflation, and higher borrowing costs. We expect this to drive much slower growth in consumer spending in the second half of the year, as outlined in our latest forecast, released this week. Retail sales are not the full picture of consumer spending, as they don’t include spending on services, like movie tickets, restaurants and travel. Therefore, part of their weakness likely reflects the shift back towards greater spending on services that were curtailed during the pandemic. On travel, Statistics Canada released data for July that showed Canadian travel outside the country was up six fold in July from 2021, reaching about 64% of its pre-pandemic level – proof that this shift is occurring 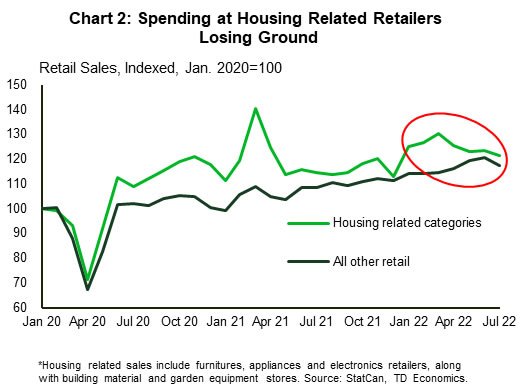