OCR Now Expected to Peak at 5%

Today’s inflation figures were irredeemably ugly. Prices are not only rising quickly but across the board, which increasingly points to a common cause rather than special factors. And even though forecasters were braced for a strong number today, the result beat all expectations. Combine that with a sense that domestic demand is holding up in the face of the interest rate hikes that we’ve seen to date, and it looks like the Reserve Bank has more work to do yet.

We now expect the Official Cash Rate to reach a peak of 5% for this cycle (previously 4.5%). With the cash rate currently at 3.5%, that implies the RBNZ is still some way from where it needs to be, with no room for delay. Consequently, we now expect a 75 basis point hike to 4.25% at the November Monetary Policy Statement, a step up from the 50 basis point increases at recent reviews. 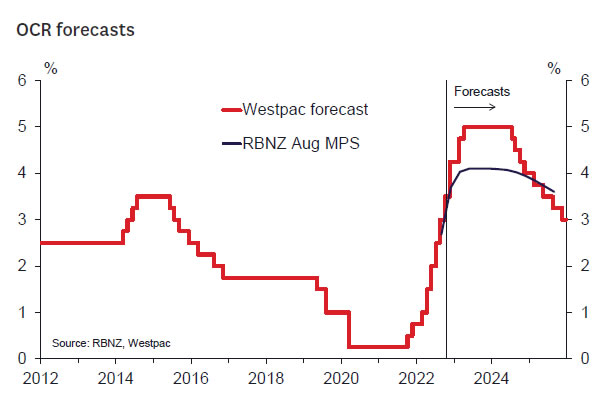 Beyond that, we’ve pencilled in a 50 basis point rise at the next review in February, and another 25 basis points in April to reach a 5% peak. That last move is not a firm forecast, but a reflection of our view that the risks beyond February are for anything between 0 and 50 points.

To its credit, the Reserve Bank has had the right idea with monetary policy this year: strong action early on can reduce the total amount of tightening that’s needed to get on top of inflation. But even after all the RBNZ has done so far – a total of 325 basis points of OCR hikes over the past year – it seems that they’re still not ahead of the game in the way they would have hoped at this stage.

Underlying the change in our OCR forecast is the ongoing strength in inflation, as well as resilience in domestic economic activity. Inflation pressures are not showing signs of easing despite the sharp rise in interest rates over the past year. Those developments mean that the RBNZ still has a lot more to do to slay the inflation dragon. 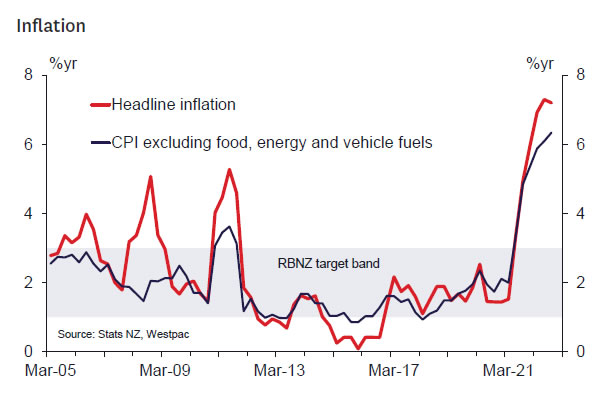 On the inflation front, today’s September quarter Consumers Price Index result delivered a large upside surprise. Prices rose by 2.2% over the past three months and are up 7.2% over the past year. While that’s a touch lower than the 32-year high of 7.3% that was reached last quarter, prices are continuing to rocket higher. Notably, there continues to be strength in the domestically oriented non-tradable components of inflation.

September quarter inflation was above our forecast for a 1.8% rise and was higher than market forecasts. The result was also well above the RBNZ’s last published forecast of a 1.4% rise.

The September quarter result was boosted by the seasonal rise in vegetable prices, along with the annual increases in local council rates and alcohol taxes. There were also unusually large increases in the prices of both domestic and international airfares (which accounted for nearly all of the surprise to our forecasts).

Importantly, measures of core inflation have actually pushed higher even as headline inflation has softened. That indicates that underlying inflation pressures in the economy are continuing to boil over, a year after the RBNZ’s tightening cycle began.

In addition to the ongoing strength in inflation, we are continuing to see resilience in domestic economic activity. That’s been seen on several key fronts.

First is the labour market. Jobs growth remains strong, and wage rates have been rising rapidly as businesses have struggled to both attract and retain staff. Consistent with that, we’ve seen ongoing strength in job advertisements and high levels of staff turnover. Those conditions do not point to an economy that is coming off the boil.

Next is the strength of household balance sheets. Mortgage rates have been rising for some time, and increasing numbers of borrowers are now rolling off the very low fixed rates that were on offer through the pandemic. However, the drag from those rate increases has not been as stark as we might have expected. Indeed, we’re still seeing large numbers of households running ahead on their mortgage payments. Households’ finances have come through the pandemic in good shape, with disposable incomes and savings rates pushing higher in recent years. That’s providing them with a buffer from headwinds like higher inflation and interest rates. Consistent with that, nominal household spending levels are holding up.

Lastly, demand in the economy is getting a sizeable boost from the reopening of the borders and the return of international tourists. While visitor numbers are still running below prepandemic levels, visitor numbers have been climbing rapidly, and they are set to continue rising over the months ahead. That’s helping to offset any cooling in domestic demand, and is also adding to the demand for workers in labour-intensive industries like hospitality.

With resilient economic activity, the current strong inflation pressures are likely to be with us for some time yet. We’re also likely to see further increases in wage rates, which would reinforce the pressure on domestic prices. Against this backdrop, the RBNZ will need to take the cash rate much further into tight territory than they had previously anticipated.